Where this campaign fails is that it is the 27th December and you can clearly see that the campaign ends on the 23rd December 2009.

I have been spending my post Christmas days catching up on webinars, blog posts and general education. While listening to a Bid Management Automation webinar presented by Andrew Goodman and sponsored by Acquisio, I got a little distracted testing some new ideas I had while listening to the hour long presentation.

One of the key questions asked during Q&A was about could you use a bid management system for a set and forget campaign? While its possible its not always best to leave everything unchecked and if you need to do that you should consider using campaigns which are setup to stop on a pre-set date.

A little bit of background about today’s entrants to the halls of failure is Advantate the SEM Agency part of Melbourne IT, one of Australia’s largest Domain Web Hosting companies.  So you would expect that such a large agency would be using Bid Management systems or at least it had setup its campaigns to ensure they don’t run Christmas campaigns longer than they should.  I noticed that Advantate was bidding for top positions for a number of PPC related keywords driving interest around a pre-christmas promotion.  Where this campaign fails is that it is the 27th December and you can clearly see that the campaign ends on the 23rd December 2009.

Their Google AdWords campaign offers a 25% discount off this Xmas, but the campaign continues well past this date, likely due to failure to reach desired number of leads and a failure to understand the importance of getting your advertising message right. As supermarkets don’t market “out of date milk” why would you market an out of date Christmas campaign? 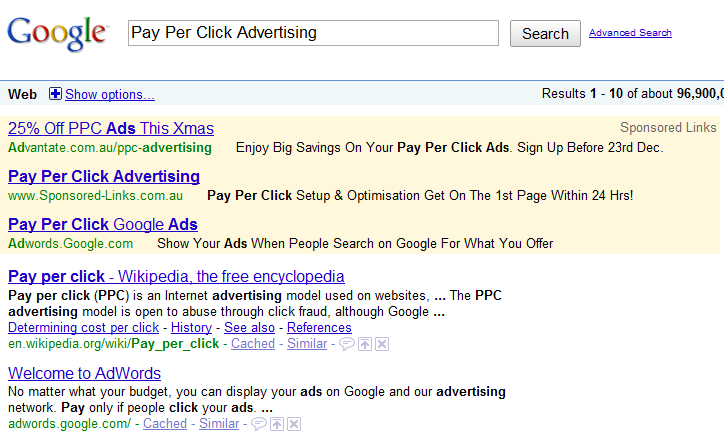 So here is a partial list of keywords they are bidding on and how much it costs per click to show how you fail with your own campaigns.

This means that any clicks that this campaign attracts are actually quite expensive for Advantate considering the campaign has expired!

While i’m sure the CTR rate would be reasonable as it has a great call to action, and they are the only companies who are offering such a steep discount to try and get that last minute batch of leads to for their sales staff to follow up after Christmas.  The landing page doesn’t really appear to match the company image/brand and I would question its conversion rate based on the lack of information or details about the Advantate PPC service. The great point is that once the date of the 23rd of December has passed if I clicked on the Google AdWords listing, I would assume that I would not be able to apply for this deal so may not contact the company. The other point is that we removed the contact number from the screenshot below but they did not setup a campaign specific landing page so it is harder to track phone calls from their PPC landing page campaigns.

We advise our agencies to remember that 2010 is all about revenue optimisation and conversion optimisation so be careful who you pick to run your campaigns as if they can’t get their own house in order….

The guest post from Anthony Contoleon takes a bit of time to step back and look at how you are using negative keywords and how you could be using them better.