The AOL AdDesk seeks to follow Google's lead in providing more transparency for advertisers and more control over their display ads as it is rumored to...

According to Google’s Ad Planner the 48 primary placement websites have around 99,000,000 unique visitors with a reach of around 39.6% of the US market with around 8,600,000,000 page views which does seem to show that AOL’s Ad network does have a significant scale.  Some of the many Advertising.com sites you can target with AD Desk include a number of well know sites including those run by competitors such as Microsoft:

So who is AdDesk built for? 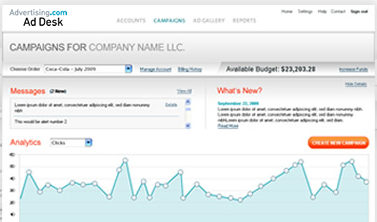 It is being pitched as built by advertisers for advertisers and AOL has been actively prospecting for new clients over the past few months to join the alpha test that helped form the product and what features it would include once it was released to a broader market.  The AOL AdDesk seeks to follow Google’s lead in providing more transparency for advertisers and more control over their display ads as it is rumored to provide a vast amount of proprietary AOL data to better self-manage your campaigns.

The solution appears to try and solve both agencies and advertisers issues within a bid management style interface, so the question that needs to be asked will the other rumors hold true and will it support multiple platforms such as Bing & Google in the next version?

What are the AOL AdDesk features?

What are the AOL AdDesk sales pitches?

So where does AdDesk Fail?

The point around such a make or break product, you would assume that AOL would have secured any similar domains such as “TheAdDesk.com”, but it failed and this site currently flagged as having Malware is likely getting a large spike in visitors.  The other issue is that there are 2 other established websites already offering a product called AdDesk which currently outranks the new AOL AdDesk product, along with a number of blog articles about its product.

The important part is that it seems a wonderful product but some of the steps could make the rollout easier and is likely to less confuse agencies and advertisers who go looking for the product but find two competitors products which appear to do a similar task.  With so much money on the line in making this product a success AOL should be more proactive securing domains and also examine the financials behind buying the Trademarks/licence of the competitors and close down their product or have it renamed.

You can always create an account with Advertising.com AdDesk and test the software for yourself, but since its a beta test their might be a delay in approval…