Google Adsense has moved towards a dominate position with its expanded support for trusted third-party networks to use its Adsense platform but its latest ad was game changing.  Google has always run a walled garden around its ad networks but as more features and technology are imported from DoubleClick such as a more powerful Small Business Ad Manager it looks promising for advertisers.

Google has started heavily promoting the external Google certified ad networks will start to appear on Adsense pages, with a promise of increased earnings for its Adsense partners.  The inclusion of a advertiser like Facebook is likely to accelerate the adoption of the Google Adsense network as a defacto standard for publishers.

If you want to learn more about what is a Google certified ad network check out the YouTube clip below.

The Facebook connect ad I saw was running on my Ideal Marketing blog and shows a sponsored placement of Facebook Connect, promoting KISSmetrics Facebook fanpage.  The placement was quite relevant and also stood out from the typical ads and the nature of the ad made it appear much more interactive and more likely to be clicked. 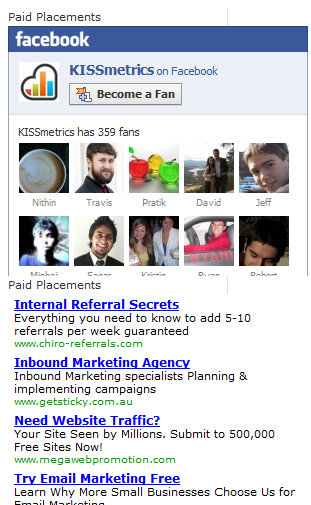 The fact that the Facecook ad has a better call to action, means that advertisers get more clicks and those websites running Google Adsense get much more revenue for their content.  But the question is now will websites remove the static Facebook links and replace them with Adsense in the hope of receiving Facebook placements? Also does this mean that more Facebook features and technology will begin to populate Google Adsense ads or is this just a test?

It is now clear how this will impact on Microsoft PubCenter beta network, which is slowly expanding in reach and websites included in its content network but it might have to move quicker.