Were mobile phone consumers ready for the direct sales model from Google?

It seems that the direct sales channel used by Google is not suitable for its consumer focused Nexus One.  Slashdot.Mobile pointed out a number of high number of complaints building in the Google forums as both HTC and T-Mobile turn back consumers complaints.

The primary get help page features an introductory video and a few text links and a “activate my phone” button. Google include a link “See what other Android users are saying” which seemed to be filled with basic questions that would normally be handled by the retailer or telecommunication provider selling the device.

Language Issues
The sheer scale of languages that the device must support seems to be another area that the Nexus One fails customer support as the forum is only offered in English.  The problem is that one of the more common questions revolves around other languages and their support on the device.

Common Problems appear
Live wallpapers
Shipping
Eligibility
Common Questions/Issues
WiFi
Charge
Upgrades?
Country availability
So how is the process for fielding questions and getting company responses? Google is using their support forums currently to support the product which usually work well because other expert users can contribute.  But since this is  a new product most of the answers have to come from Google.
With around 20 questions per page, currently there are 39 pages of support questions or around 780 consumer questions, with around 425 questions or 54% appeared to have been answered by Google staff. The other common issues is that many of the questions appear to be very similar and even duplicated which makes the scale of the support resources required even greater. 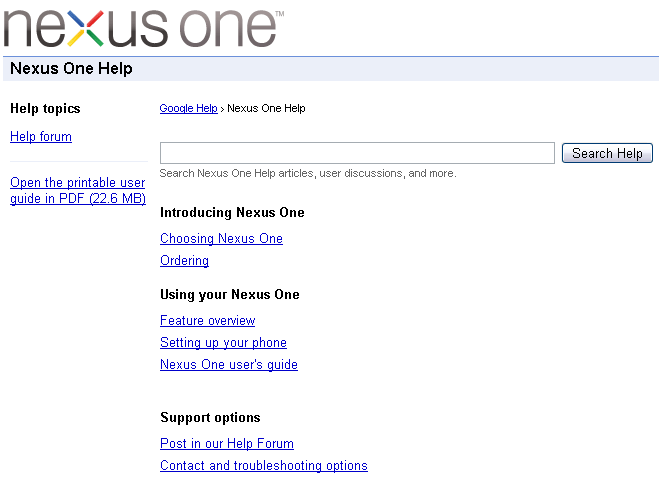 Even the official android support page appears to be limited in resources for a product that Google has so much invested in…
I would expect more resources, pdf guides and even video help guides to support new owners.
SDK is also an issue
One of the other issues has been to support the Android developers who are developing apps for the new OS.  There appears to have been issues in ensuring developers get their hands on the latest Software Development Kits “SDK” prior to consumers.  Developers who are supporting Android have apparently had to let consumers beta test their applications in the latest Android 2.1 and provide feedback so changes can be made.
Apple iPhone SDK has had similar issues in the past with developers been restricted in what they can develop and what ability third-party applications have on the device. Apple continues to restrict what applications can access its iTunes, contact list…
Some developers even feel that Apple is intentionally prohibiting mobile innovation by third party developers with their SDK, so is the same issues going to plague Android?

This is just for the US market which demonstrates how seriously they want to win marketshare off the Apple iPhone.