This is just for the US market which demonstrates how seriously they want to win marketshare off the Apple iPhone.

Google/Verizon have followed Bing’s lead in the go big or go home with their new $100 million marketing campaign for Droid.

When Microsoft launched Bing with their $100 million marketing campaign across the world agencies were being constantly critical for the big budget, not much seems to have been said from any agencies yet about Google/Verizon’s massive campaign.

What makes this interesting is that this is just for the US market which demonstrates how seriously they want to win market share off the Apple iPhone. How much would they spend if they launched a worldwide campaign?

The blanket $100 million campaign will likely so big that you cannot escape it online or offline if you live in the US, watch US television or visit US web properties.   The initial “anti-iphone” campaign appears almost to have an evil hint closer to a Skynet device used to take over the world. According to the AdAge article much of the budget will be spent before the end of the year.  Being halfway through November this is a direct pitch at the Christmas sales and maybe some change left over for post-Christmas sales.

It appears that this Android campaign started on the 6th November, first covered by TechCrunch in the image below, where they added a link to the frontpage of Google.com. This is a massive exposure for the new Verizon/Motorola phone as Google has around 2,500,000,000 visits a month according to Compete.com site statics for Google.

This homepage link leads Google visitors to a Droid campaign landing page which interestingly does not feature their partners logos but do mention them by name.  Even with the multiple step process to find out more it means that Verizon will likely not get too much of a free ride, but the sheer volume would make up for if it meant a lower conversion rates. 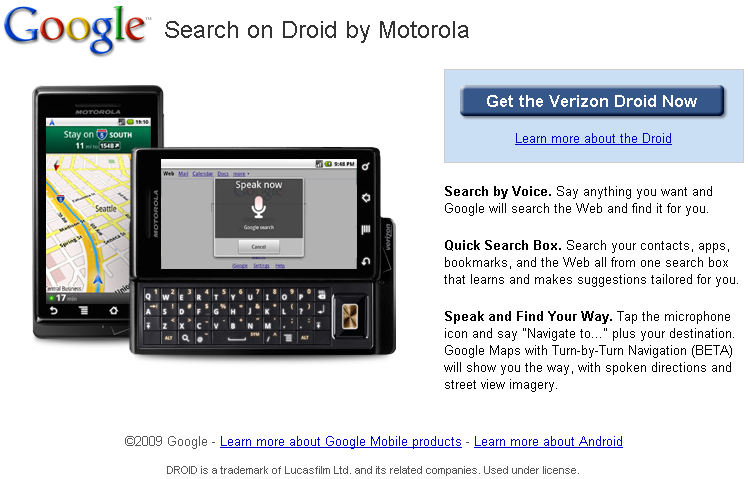 The Droid landing page has 3 features that they believe are the key benefits of the device:

Some of the other features discussed in some of the videos discuss how Droid can do things that the iPhone can’t such as take photos in the dark.  It seems that the gloves are off between the two companies in promoting their mobile devices. 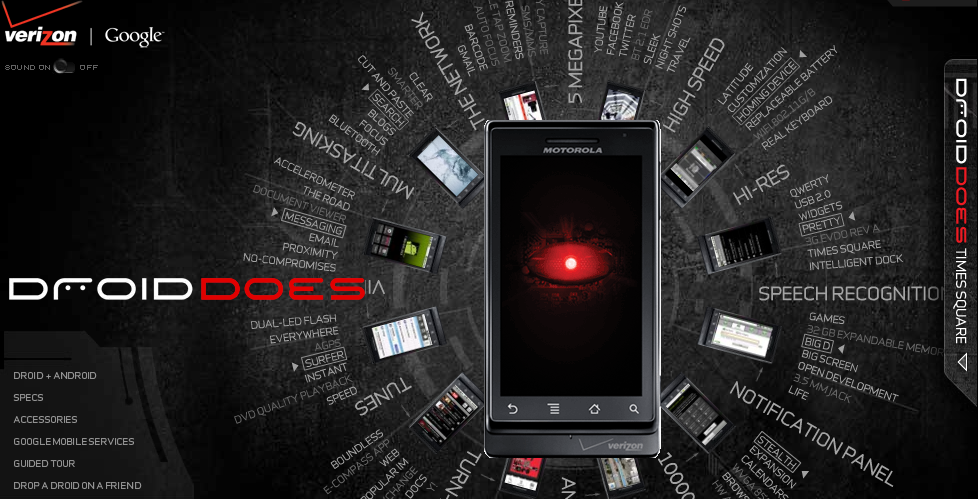 The Verizon page is very heavy around content for the product, with a lot of video and images but all built in flash.  It is interesting that Ajax was not used to build the such visual site.  The DroidDoes website has a heavy push around the benefits of the device that highlight some its key differences to the iPhone. One of the more annoying features is the strange crackle sound when you move the mouse over any of the items and the slow load times.

If you want to watch the TV clip from the new Verizon campaign, check it out below before you see it everywhere…

Update# Google has recently expanded their search to include both iPhone and Android Mobile apps in search.