Facebook will be releasing the new Ads Manager to all advertisers by the 25th May 2011, so keep an eye out in your account for the new dashboard.

Today I noticed while looking at the data from some current Facebook ad campaigns that there was a notification at the top of the page but also a new link to a feature called “creative library”. The notification was an update to Facebook Ads Manager interface with new enhanced visuals and new campaign performance data, my account had been upgraded to take advantage of the new advanced metrics and graphs to better understand my Facebook Ads.

The new updates highlighted that you can see an audience performance graph that show you how many people your Facebook ads do reach compared to the total audience you can target over the last 28 days.  This is important as it can show what elements of your campaign are under delivering and guides on where you can improve your campaign to reach more of your audience including more social reach or increasing your CPC bids or campaign budgets. 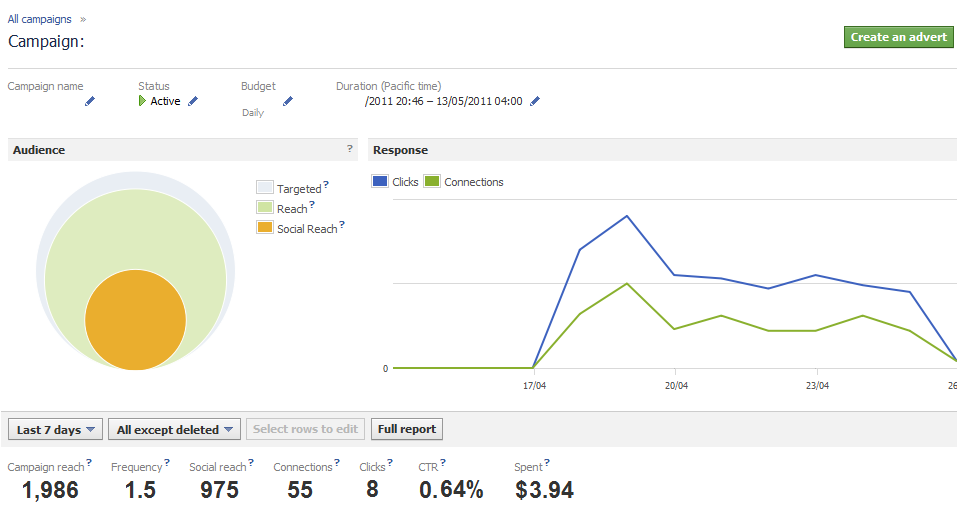 The new metrics are also constantly updated so offer almost real-time results of your campaign providing you campaign metrics to understand how Facebook users are responding to your campaigns, and adjust them constantly.  The metrics have almost been simplified as there is now clicks and connections (conversions) which enable advertisers to understand if they are failing to target the right audience by not getting any new fans, app installations, or RSVPs to your events. You can quickly also divide the number of connections into number of clicks to get the campaign conversion rate which helps spot potential failing campaigns quickly.

One of the issues with the previous interface was the time wasted loading when clicking back and forward to manage your individual Facebook ads.  Now you can quickly click one of the ad rows in your Ad Manager screen and the ad will drop down allowing you to quickly preview the ad and click-through the various elements of its individual performance without leaving the Ad manager.

Similar to a number of bid management and ad serving platforms Facebook has created a central database of all your campaign creatives allowing for scalable campaigns and also the re-use of previous ads in your new campaigns.  The platform allows you to view all campaigns creatives, by campaign but also those campaigns with no adverts yet created, and you can also search via keyword to quickly find that perfect ad. There is 3 options you can edit that creative, preview how it will look on your profile page and click to use that creative in a new or existing campaign.

Facebook will be releasing the new Ads Manager to all advertisers by the 25th May 2011, so keep an eye out in your account for the new dashboard.