Facebook deals point of difference is the massive audience using Facebook mobile already to check-in to businesses easily out numbers the total number of subscribers/people using their competitors platforms.

Facebook has started to leverage it’s over 500 million members with it’s catchphrase that deals on Facebook is now better with friends.  The updates are starting to show in your news feed as friends subscribe to get the deal updates for their selected city.

The idea is that Facebook is both able to virally grow the audience for it’s new product and get’s to understand the demand for new areas where it should be seeking to get businesses to offer deals for check-ins. The advantage for business is that consumers are already using Facebook places so it’s not going to be a large change to start to get offers from local businesses in their Facebook news stream.  The only point of concern is that how Facebook analytics offers limited abilities but the upside might be that the Deals platform can be powered via Facebook advertising API using platforms such as Acquisio, Clickable or Kenshoo to power and optimise the offers.

Like most Facebook products they are focused on the US market which is limiting the true potential of the product, initially Facebook Deal updates are only for the following US cities: 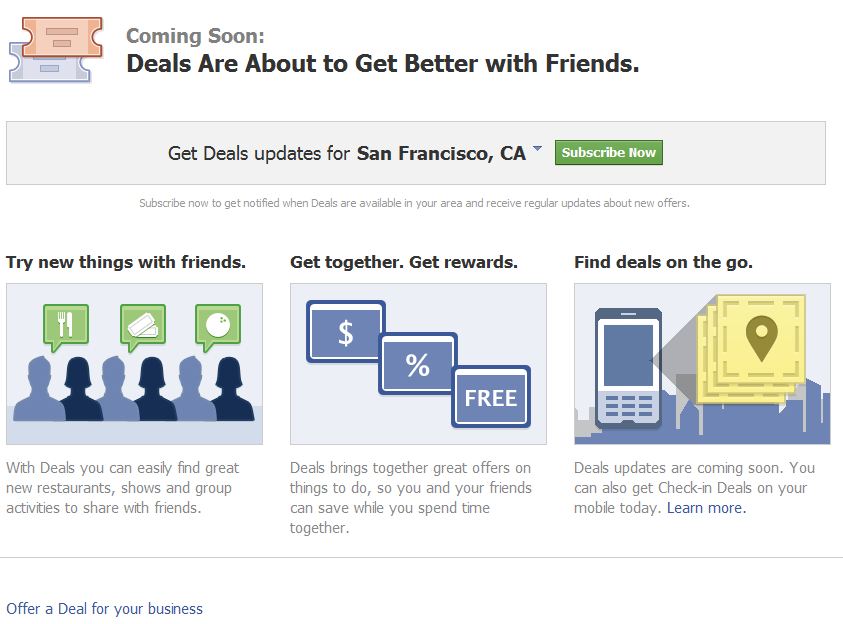 The idea behind Facebook deals is not that ground breaking as it’s about trying new restaurants, shows and activities but seeks to join up with your friends to spend more time together and not random strangers like other platforms like Groupon or Living Social do. The main point of difference is the massive audience using Facebook mobile already to check-in to businesses easily out numbers the total number of subscribers/people using their competitors platforms.

The expansion of Facebook Deals follows on from the launch of Google Offers after Groupon turned down a $6 billion buyout. It seems that Yahoo who just purchased Australian group buying site Spreets for $40 million will have a fair while to try and expand it’s email database of 500,000 people before Facebook launches Deals in Australia. It’s likely that 2011 will increase the consolidation of group buying platforms as Facebook starts to wipe them out one by one as it leverage’s it’s massive audience base and starts to build business dependance on it’s places platform just as Google did for business with Google Maps & Local listings.

The reason why Facebook may match and exceed the success of Groupon is that they are advertising they are going to team businesses up with Facebook specialists who will help them market their business on Facebook.  What is not yet clear is the target budgets that a business will need to spend to take advantage of the new Facebook deals platform and is business ready to build dependence on Facebook just yet? So it’s likely that based on the efforts to create content within Facebook and the type of early adopters to subscribe show the platform might have some success but it might come at the expense of competitors Facebook apps like FourSquare.