Wow if you thought that some of the Google+ brand pages appeared to be a bit of a ghost town, from what I see Brand profiles on Vine are even worse. A random content heavy producer like Travel Channel who have 792,610 followers on Twitter and a 1.005 million fans on Facebook, 3.415 million people on Google+ but only have 10k followers on Vine.

A further sign that Vine is a ghost town for brands is the Travel Channel only have one Vine which they published on the 12th Feb 2013 almost a year ago, which doesn’t really show commitment to the platform and even that post only has 65 likes, 2 re-vines and 10 comments not amazing engagement from 10k followers. This seems to be one post to secure the profile and show people they are following the right channel but for a media company that produces such amazing content their Vine is well quite a lazy and boring so no wonder the engagement sux.

But if we look to competing platform Instagram they have 80,475 followers, 264 posts including a Christmas video post and already a post in January 2014. So it’s not like they are not focusing on creating and sharing short videos on social media they just don’t seem to care for Vine. Maybe the 6-second video limit just wasn’t of interest to them?

It is very hard to get much data at scale from the platform but from my manual checks there seems to be a majority of the posts that don’t get much engagement but some of the more successful ones seem to see tens of thousands of engagements (likes,re-vines,comments,social shares). Compared to other social platforms that is not really that amazing and enticing for brands or celebrities to join.

The big successes seem to be the ones that are getting hundred of thousands and even millions of engagements are those hand picked by the Vine Editorial Team, but even they have only picked 56 posts so far such as their one one below. Like Instagram it also appears that it’s individuals that are more successful and than brands in achieving engagement. 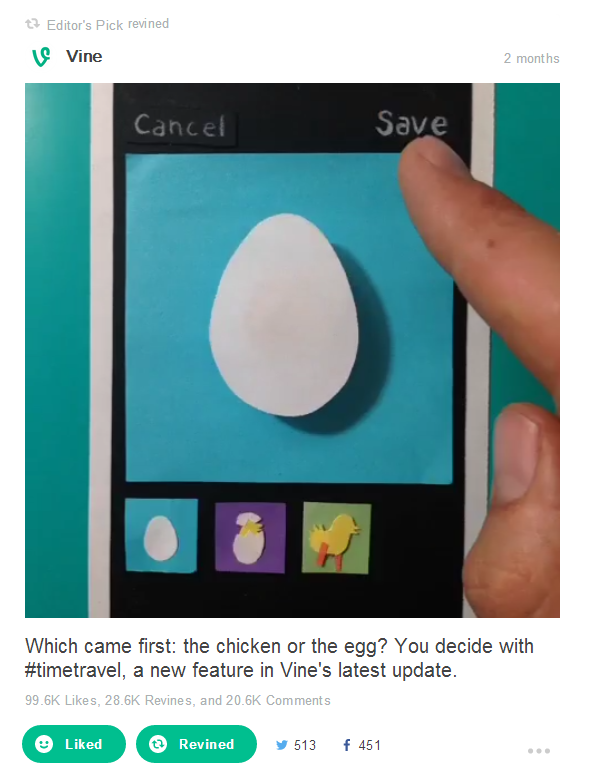 What could Vine improve?

The release of static profile URLs is a huge step forward as that will enable more users to find brands and users from channels such as Google but also will allow for cross promotion of their Vine profile URL on other social platforms. They could also look at improving the engagement possible via the web app will also help as sometimes your mobile/tablet is not your preferred device for consumption of content, it seems inconsistent if you are viewing another Vine that is not in your stream. If you do want to reserve a profile URL you need to post at least 2 Vines and have an account active for more than 30 days and then you can visit here. The ability to tag users is something that is expected these days and it seems that feature is still lacking.

What is Vine doing well?

The the re-vine or re-blog feature is something that Instagram is missing and something that worked very well for blog platform Tumblr.  There is appears to be vastly less spam and self-promotional messages such as #TeamFollowBack or pleads from users for other people to follow them back that I see on Google+ or Instagram.