In one of the most hyped events ClickFrenzy sought to emulate the upcoming US BlackFriday and Cyber Monday sales in a single 24 hour event. The event was heavily hyped across TV news including Sunrise, ACA and Today Tonight but it seems that it was promoted a bit too much before they had thoroughly tested the infrastructure could hold up.

ClickFrenzy Availability
Just 30 mins after launch I started tracking the UpTime of ClickFrenzy.com.au and so far over the past 2 hours the overall availability has been 13%. This is just the homepage several hundred tweets are showing that most people can’t actually get beyond the first page to actually try and buy something.

Who is behind the Infrastructure?
One of the biggest potential partners in the firing line is UltraServe the web hosting provider who is powering the whole platform. It’s a very tough sales pitch to talk reliability when your premier client has 13% website availability during their peak sales period when you advise 99.9% uptime.

There should have been more measures in place to ensure availability of the website such as backup webhosting providers that could share the load, the user of Content Delivery Networks and some thought around can you actually deal with the traffic if this is successful  Note that it’s not just UltraServe that are having issues almost all of the retailers involved in Click Frenzy have also crashed out which is a bigger concern for ecommerce in Australia. Some of the retailers involved are just having hiccups, others are coming up and down, and some are just down out and out for the count.

Who benefits from Click Frenzy?
One of the big beneficiaries is likely a number of Rysen’s extensive ecommerce clients. But the question is will it potentially damage their image if their customers are unable to access their heavily discounted offers because people can’t access ClickFrenzy?

Who Benefits from ClickFrenzy Failure?
There are a number of guerilla marketing activities are happening such as by EB Games who are taking advantage of the failure by poking fun at the ecommerce train wreck and promoting StarCraft 2 across social media with the tweet below.

Catch of the Day has also been very aggressively marketing via it’s social media channels to get some of the buyer who can’t spend money on Click Frenzy retailers over to their shopping site. This is a very smart and quick move by one of the largest group buying retailers in Australia to take advantage of their newer competitors missteps. Another nice big surprise winner has been online charity Kiva.org that have been included in around 16% links featuring the #ClickFrenzy hashtag according to Topsy.com.  There has been some backlash around the waste of money buying from Click Frenzy retailers that could be bought instore, on eBay or overseas cheaper and the difference be donated to charities like Kiva.

Are they ready for negative backlash?
There are already scores of people poking fun at their ability to successfully run an ecommerce operation and even more are taking to social media to vent their anger at the inability to purchase discounted products they don’t need.

There is a growing number of public tweets disclosing the prices offered are not actually cheaper than the standard retail price, this is something that will likely blow up in the next few days once the dust has settled.  There are a number of retails involved in this that appear to be inflating prices or doing bait and switch based on the stream of angry tweets using the #ClickFrenzy hashtag.

Growth of Paraody Groups
It wasn’t long before Click Frenzy Fail fan page appeared and it’s number of fans has been progressively growing around 1000 or so per hour since ClickFrenzy launched. The page is filled with jokes and jabs about the failure of the site and plenty of memes about users having to decide between hitting refresh and just giving up and going to the store. 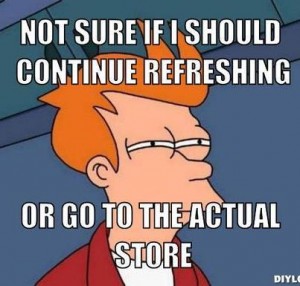 Click Frenzy was bad even Hitler got mad about it!

If ClickFrenzy is going to be a single point of failure then it won’t get enough momentum to succeed long term but I can see many retailers not directly involved expanding their guerilla marketing activities for 2013. There will be a lot of blame shifting over the next several days as everyone involved will try and keep their head away from the chopping block.  The sad part is that as many respected people in retail and technology industries have said it shows that many Australian retailers are just not ready for real ecommerce or big events like Black Friday or Cyber Monday….

Google understands more than most the benefit of an optimised store designed to generate more revenue.