Facebook to block those links not in its commercial interests....

Facebook has managed to grow to 500 million users but it also has appeared to upset every aspect around user privacy in the last few years, but it seems that its also censoring what you share online. Facebook encourages people to share everything on its platform but you have to be careful what you plan to share as not everything is welcome by them. Facebook recently recently shut down a Facebook fanpage with 47,000 fans based on a vanity URL. The Realestate referral group was one of the largest on real estate group on Facebook but used the trademarked term “Realtor” so Facebook acted on the trademark request and closed the site.

Is Facebook censoring?
The censorship topic was further compounded when Glenn Gabe tried to share the link on Facebook to the article it failed.  He has covered the issue in more detail as the censorship was done via a error message. I’ve just tested the link and now that the fanpage has been re-instated, you can now post the link.  The issue does cause a problem as it seems Facebook is selecting what information you share that might make it appear negatively. The problem is Facebook is encouraging users to share everything but appears to be censoring links which is a conflicting posistion to be in.

It’s happened before
The point is that i’ve seen Facebook censoring links recently when posted by its Facebook chat platform, the link was to Power.com a social media aggregator that focuses on data portability for social media accounts.  Power.com was sued by Facebook for allowing users to use a central portal for all their social media profiles and has since removed the feature for Facebook users, but appears to have upset a few people at Facebook enough to block users sharing any links to that domain.
Don’t share links!
The image below shows the message shown when I tried to share the link via Facebook chat, which seemed to be strange since it appeared to be none of the suggested issues, the website was not abusive or spammy. This seems to show that Facebook doesn’t really want users to share links about everything, we at least those that are not in the commercial interest of Facebook.  The biggest problem I can see is that while Facebook can do what it wants on its own platform, it seems the start of a dangerous trend if it is going to start censoring what users are sharing compounded by the sites link to data portability which Facebook has rejected. 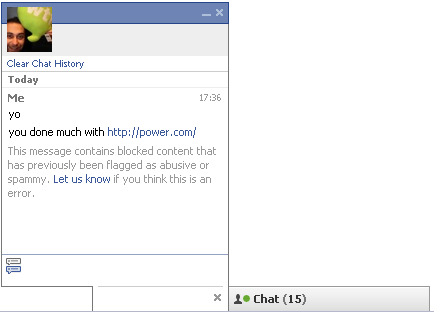 Why request an exception?
The Facebook link to request to share a link shown below seems to be a bit much for most users to be expected to fill out, so it once again compounds the issue of censorship, by making it difficult for users to share legitimate links. The form requires you to add details about the link, explain why you think it is should be allowed and also complete a security CAPTCHA to ensure you really want to share it and are not just a spammy. There is enough room in the future on the form to add room for parental signature or blood sample. 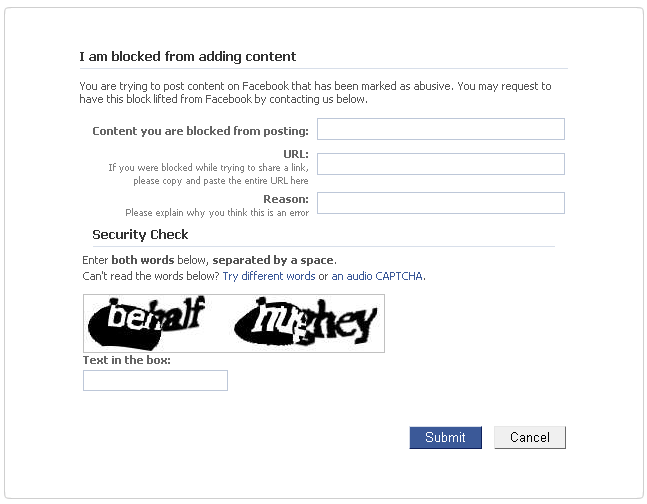 Its not a bug!
To confirm it wasn’t a one off issue, I tested it again today, by trying to post the link into my status update, it shows the same error message that was shown last month in my Facebook Chat window, the link once again is just to the homepage and doesn’t even make any reference to Facebook, its not even a login or signup link just a standard link.

So the question is do you think its fair that Facebook decides to block a link based on commercial benefit but I can potentially choose to share inappropriate or abusive materially more easily that links to other social media platforms? Have you seen this occurring on other sites that you are certain are not abusive or spammy?