From my understanding the whole principal of the application and based on their tag line its about creating an ecosytem for your news so its not just another RSS reader.

In a slightly shorer interview on Technoarti I interviewed Bobby Ghoshal in the post iPad news apps FLUD the market, which covered in some detail learning more about his new perspective on how people can consume their news using new platforms such as the iPad, Blackpad or iPhone. The interview questions included in this post focused on a separate theme and focus more around the functionality and development platform used to build a great product and launch it in such a short period of time. From my understanding the whole principal of the application and based on their tag line its about creating an ecosytem for your news so its not just another RSS reader.
FLUD vs Flipboard
The FLUD app appears to be a smarter way of consuming news that heavily promoted magazine styled Flipboard. The Flipboard app offers a complex and busy layout that offers boxes for your Facebook news feed, twitter feeds and various other RSS feeds.  The limitation of Flipboard is that a designer doesn’t have much control over organising the content to be a constant look and feel for users, it almost seems to be closer to a replacement for your web browser than a news/media consumption platform, shown in the screenshot below. 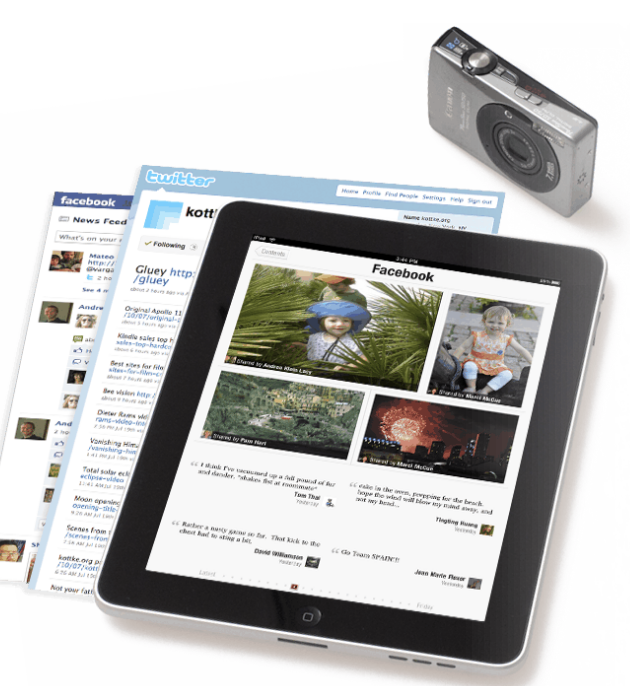 Flipboard appears to have created a new social network where you have more of a mystery prize for what content will be filtered by your group of contacts.  The problem with Flipboard that FLUD attempts to solve is for the casual experience that will work on other devices such as Anroid devices, iPhones and other mobile devices.  Another issue around Flipboard is that content feeds seem to suffer if they are behind paywalls and you will not be able to share this content with contacts.  Flipboard breaks the revenue model and makes article consumption hard to track and does not naturally work with RSS feeds, where FLUD appears to encourage it.
The interview so what about FLUD? 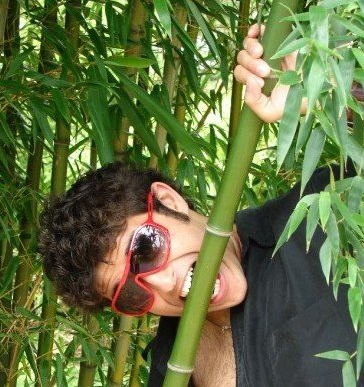 Everyday on my iTouch I seem to see new applications showing requests to update because they are now iPad compatible, as someone who doesn’t have an iPad, why do I really care that the application is not suitable to be used on a bigger screen?
It was this mentality that I drafted some of my questions to Bobby Ghoshal & David Coallier of Echolibre who built the FLUD app around the FRAPI platform, really did I care for another iPad ready product? Here is the other set of interview questions following on from my Technorati post, with Bobby Ghoshal.
He did request the use of some more fun profile pictures which shows some insight for his passion for creativity and breaking old down obstacles such as being able to build an new iPad application in just 1 month.
(Q1) WTF (What the FLUD) is it?
Answer: Download FLUD right now (August 5th 2010) and you are going to see an intuitive and beautiful RSS news reader with social sharing controls, video playback, no limit on feeds, bookmarking etc. Our vision, however, is to create an ecosystem that converts readers into influencers. What is an “influencer?” you might ask… Internally we have our own ideas of what that means, but that is really up to the community to decide. We have purposely left things open ended for v1 because the community is going to give us some powerful ideas and they already have. For now our goal is to focus on building controls and tools that users WANT to use and not get caught up in the features game.
(Q2) Ive already got all my iPhone apps such as Mashable, Bloomberg, NYTimes, Time Mobile, WSJ, FT Mobile, Engadget, ThompsonReuters and Daily Telegraph so why do I need another app?
Answer: You have just named some of the best news publishers on the iPad, but here is the problem… they do not co-exist in one place. We are bringing a cohesive, fully customizable and still beautiful reading experience to one app. That can be powerful for a power-reader who wants quick bytes of broadcast-able information from 20, 30, even 40 different sources of news, but doesn’t want to switch between apps.
(Q3) How does FLUD function offline or when there is no internet access?
Answer: We are definitely pushing for offline news access, no questions asked. Our priorities shifted for the v1.1 release after listening to our Fluders and their wish-list of items. We are going for the top 3 things they asked for and offline access isn’t one of them. Expect to see offline access in v1.2 though, which should be coming up fairly soon.
(Q4) How does FLUD link users to other users?
Answer: For v1.0 we have chosen not to focus on user profiles. The best way to connect with other users is through our social sharing controls currently in the app. Also, for v1.0 users can anonymously influence “the FLUD” which is the community news feed of most loved news items. We are not ruling out user profiles, but we don’t want to force it on Fluders. We want to make sure that when we roll it out, it serves our users and our strategy seamlessly. 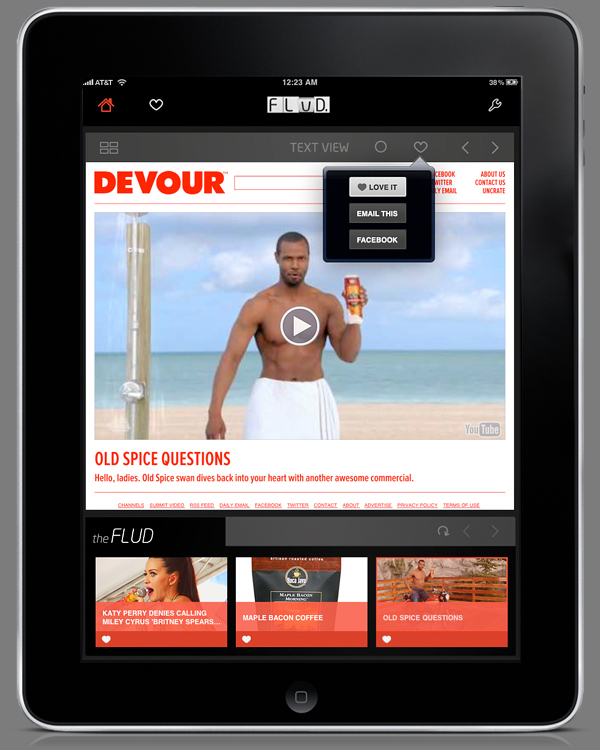 (Q5) How does FLUD protect users privacy as they supply more data on usage?
Answer: We are currently not collecting any personal user information so we do not have any issues here. All we collect right now is the user’s device ID.
(Q6) What was the initial business model for the FLUD App and how did you come to a final decision?
Answer: We started an application that allowed a user to track content that they chose to track and then eventually will be able to influence. Under the right conditions, that can be a potent mix on an exponential scale.
(Q7) What about the whole information overload issue?
Answer: Yes this is a great question. The easiest way to scare a user away is information overload. That is why we built FLUD to be highly scannable with plenty of breathing room around the content. Our goal is to help the user get quick bytes of information while they are at their desk, on a commute etc.
(Q8) What is the basic framework for the App?
Answer: FLUD was built with Objective-C along with Facebook and FRAPI as third party integrations.
(Q9) What is FRAPI, it sounds like a Coffee brand is it Java?
Answer: FRAPI is a high-level RESTful API framework that allows companies to focus on business logic engineering rather than spending precious time trying to make a REST-like API. By relying on an API, FLUD has the possibility to place updates on the app without having to go through the Apple approval process; something that can be critical in this fast-paced market. FRAPI also enabled FLUD to reduce development time drastically while giving the product the ability to scale to thousands and thousands of users seamlessly. Learn more about FRAPI.
(Q10) So is there a worry about the seeming stream of clone apps in the iTunes store?
Answer: Not at all. Competition is healthy. I don’t want to shoot myself in the foot here but the truth is FLUD, Flipboard, Reeder and Pulse are 4 top notch RSS reader apps. Eventually all the core functionality across the board will normalize and it will come down to market position and design. Over the next few months we will continue to strengthen not only our app but also our brand, goals and message.
(Q11) How did you find the Apple approval process?
Answer: Apple is doing their best to make sure they get most apps approved within a week of their submission. I do wish that there was a long list of items that we know we cannot have in our app in order to get approved. FLUD would have come out a week earlier, but we got rejected because BBC doesn’t allow featured syndication. The fix was easy, but it would have been nice to have that knowledge beforehand so we didn’t waste 14 days with just waiting.
(Q12) What could you have done better in the Apple approval process for the next app?
Answer: A better notification system to show where your app is in order of approval as compared to other apps and a better list of “DO NOT DO” so developers can make better decisions the first time around would be very helpful.
(Q13) What are the time frame for updates to the FLUD App?
Answer: We are looking to work as fast as possible and to build a larger team to help facilitate quicker updates.
(Q14) When is the Flud App available?
Answer: Also is there FLUD App available in all countries? Now, we are fairly happy with that result after only 5 days, of course we want the crown and there is plenty of work to do yet. Also, yes, FLUD is available to every country that has an iPad in it’s stores.
(Q15) What does the FLUD App cost?
Answer: The app costs $3.99 in the US store and it’s currency exchange equivalent in other countries.
(Q16) Are there any plans to extend the platform to cover Android or Blackberry platforms?
Answer: Absolutely, Android is a big check box on our list. We haven’t discussed Blackberry as yet, but we will.
Watch their vimeo video of the iPad application
So FLUD maybe the future of news?
So it seems that early entrant Pulse appear to have stalled around its integration with social media contacts where FLUD appears to excel from the early images and video I have seen, so I might have been converted now if only I was as impressed with the iPad, maybe I will wait for the Android or Blackberry version. You can follow FLUD Sexy News on twitter and I encourage you to help make this app awesome and give the FLUD team feedback and love. If you have a iPad why not give the app a try you can Buy FLUD news ecosystem on iTunes