Facebook Travel is coming but its too early to know if its going to be a mobile product, via a API or via Bing Travel

At the recent Facebook Developer Group in New York, one of the their most interesting products was touched on “Facebook Places” which enabled Facebook to engage more with their users. It also seemed interesting that not much has been done since Facebook’s purchase of travel startup Next Stop in July 2010 which was official closed last month.

Facebook said that it’s Facebook Places product was one of the final pieces of the puzzle so they can understand the following about your social networks:

So its logical that Facebook can start to understand why you checked in to a particular location or with certain friends but it’s still not yet linking the data in public that you all checked into that location because it was a friend’s birthday.

The how you got there and the why you went there combines the next evolution of Facebook in its travel platform. Platforms like Blacktop are a suitable acquisition target for Facebook if they are serious about moving towards filling that travel gap.

Blacktop allows group checkins (Foursquare/Places) so you can create a complete record of the trips to share with friends and family. Blacktop can better link with Facebook photos which allow for comments (status updates) and tagging photos as you go. Combined with a mobile version of Facebook recognition software you can auto-tag friends on the trip and geo tag all your photos for later. 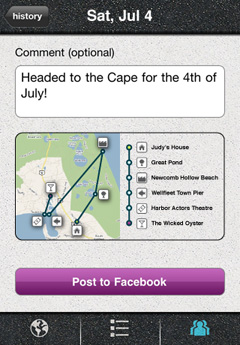 Facebook photos are already the largest photo site in the world, and a number of them are taken while on trips/holidays so it’s a very smart move for Facebook to look at a more structured and easy way for its members to share.

Blacktop solves the issue of Twitter and FourSquare flooding your friends News feeds with multiple posts. Blacktop also allows for integration with Facebook Places & FourSquare which could make Facebook more of a travel platform than just an add on feature. Blacktop is still very early in the concept and makes sense for Facebook to buy them now before they grow any larger, you can get the Blacktop preview from iTunes

Facebook recently announced a partnership with Amazon which allows Amazon.com to benefit from the social recommendations engine and its very easy to see how that can be expanded to cover verticals such as a travel network.  The smart thing would be for Facebook Travel to link in with Bing Travel that should allow more traffic and visitors for Bing and friendly partner for Facebook.

Facebook has a new product announcement tomorrow and my guess that its going to be either a Facebook travel product or improve an existing product that will set the ground work for Facebook Travel to be launched later.  It seems to be only a matter of time before its launched and it will further strengthen the Facebook mobile platform as most people carry their mobiles when they travel.