Bing for Mobile does the Verizon Android users proud with this update and look forward to more devices and carriers soon....

The Bing Community broke the announcement today that Bing for Mobile was coming to Verizon Android users and would be expanding its app to other carriers and mobile devices soon. In an interesting move where mostly the big tech blogs are the first to feature breaking news and particularly anything to do with Mobile or Google will likely be annoyed that one of the first sites to cover the launch in detail was Seattle Technology Blog TechFlash.

So in what looks like the Microsoft marketing machine is finally starting to get rolling and has finally got mobile users in the center of its development plans, so it will be interesting to see what other Microsoft applications might also be coming to your Verizon Android phone soon.

The Bing maps function has finally evolved beyond Google maps as it will automatically find your current location and intergrates some local business features that third party apps have offered for years.  You can now search for new places based on categories such as cafes, banks or cinemas which is going to prove useful if Bing Maps intergrates with Yelp or FourSquare data. There is till no real integration with local checkin apps and it will be interesting to see which of the companies is first to ink a deal to be the exclusive provider of checkin data via an API. 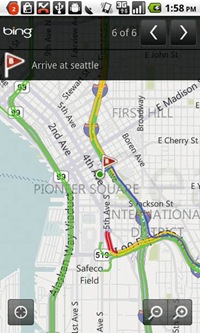 Bing Maps Update
The new Bing for Mobile App even has a zoom button for one handed operation of its Bing Maps that doesn’t require you to use the “pinch to zoom” feature, which is useful for drivers who continue to use their phone while driving, when holding an umbrella or when carrying stuff with the other hand.  Small little features show that much thought has gone into developing the new app specifically for the Android user and it will be interesting to see how updates are rolled out which might show a sign of whats to come with the new Windows7 Phone.

Bing Travel for Mobile?
Its interesting to see what looks like Bing Travel has been built into the application with the ability to do a voice search to find flight information to see arrival and departure times and can offer other details such as Traffic, Hotels, Weather and Local news relevant for that flight. You can see the example screenshot below that shows the details for United Flight 635 leaving from Chicago to Seattle, but its not clear why you might need to know Hotel information for a departing flight.  The addition of Traffic and Weather are great to find out if a flight maybe delayed but just basic quirks show the application still needs some usability testing to make it more intuitive to users. 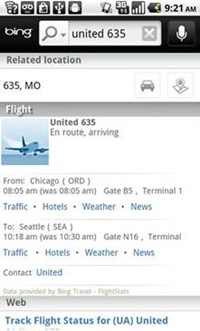 Why Verizon?
Bing has been smart in their selection of the US carrier who was the focus of Google’s Droid Marketing campaign back in November 2009.  Google used Verizon to help build its platform up within the US market so its likely that Bing can now benefit by having an existing user base who can utilise their mobile app.

Why Android?
Leading up to the launch of Windows7 Phone later this year, Microsoft has started to move their resources towards allowing consumers to experience its Bing platform on as many devices as possible.  Already having a application for the iPhone and Blackberries, Android was the next logical step.

Why did it take so long?
Based on the community post it seems that much of the Bing application has been built to take advantage of the power of the Verizon Droid phones, so its not just a standard development project but a look how to get users to experience Bing with the best experience.

Bing avoids AT&T?
It is possible that Bing has avoided AT&T due to the possible impact on user experience if the network is unable to provide high speed internet access at all times.  The new Bing app appears to be fairly graphically and would likely be fairly bandwidth hungry based on some of its visual features. According to Comscore’s Mobile Subscriber stats for April 2010, Verizon has around 31.1% of the market which allows Bing to reach a very larger subscriber base in just one development release.  Verizon also like most carriers loves exclusive offering to entice customers and reduce churn rate, so expect some marketing campaigns around the launch will start soon.

Waiting to test it
I haven’t had a chance to play with the new Bing for Mobile application yet but I can see the experience is much better than the current offering on my Blackberry so I look forward to trying it out to see if its as cool as it sounds.  If you have had a chance to use it please drop a note in the comments with your initial reactions.

One Reply to “Bing for Android”