focuses around the 3 primary terms profiled in the Hitwise report and who was the winners and losers and any other factors that might have limited the impact of the search lift around these terms.

Today Experian Hitwise released their May 2011 search report with a focus on UK/AU property search traffic but unlike the UK market the Australia search volume has shown growth over the past 2 years and did not see the big correction at the end of 2010.  As a percentage of total search traffic both Australia and UK are fairly close but search terms such as “property news” featured no AdWords in the UK but within Australia the SERPs only featured News.com.au Ads driving traffic to it’s YourMoney portal.

Based on the high Australian dollar it’s likely that a number of the Australian property portals will take advantage of the falling UK market volumes to make acquisitions and strategic partnerships in the UK market if they want to maintain their market growth and dominance over the smaller independent players.  The following article focuses around the 3 primary terms profiled in the Hitwise report and who was the winners and losers and any other factors that might have limited the impact of the search lift around these terms.

The biggest winner of the biggest traffic driver by search volume is RealEstate.com.au who manages both the #1 and #2 results followed by Domain #3 but also a large number of local agents benefited from the increase via the 10 Google places results.  While you would assume the type of search intention would be similar to “property for rent” it’s actually not as only “property for sale” shows the 10 local places results giving searches what they want.  The impact is fairly great for the other leading property portals as they get pushed down the SERPs below the places results to show just below the fold and likely did not benefit from the uplift in traffic around this particular term.

The big winners in the growth in traffic around “property for rent” is the number 2 player in the market Domain who was able to stay ahead of RealEstate.com.au to grab and first and 2nd placement with the remaining results made up of the leading property and real estate portals in Australia. This growth of property for rent search volume comes as housing affordability improves as Australians receive higher wages and interest rates are forced down housing prices.  It’s also possible that increasing traffic and travel times to work are changing the priorities of works who are looking to live inner city, closer to entertainment districts and transport networks. Since May 2009 the Australia search volume for related “property for rent” search terms has increase 526% supported by the strong rental market in Australia.

The big winners in the increase in traffic is Fairfax owned Home Price Guide and also Brisbane based OnTheHouse.com.au but interestingly followed by the much larger RealEstate.com.au.  Other providers such as RPData and it’s related sites fail to take advantage of the uplift in traffic due to their poor rankings in the SERPs, but a large portion of the results are Google News results and but also a number of news articles. The related search term of “house prices” has shown a 433% increase since the beginning of March 2011.

The massive growth in “property for rent” has come from almost nowhere 2 years ago to now account for 0.014% of Australian search traffic but house prices search traffic has done almost nothing over the last two years until this month.  The massive change in search traffic around “house prices” shows that concerns about a housing bubble might be starting to come true or at least some of the concern

March key figures for House Price Indexes in 8 Australian capital cities so a weighted average change of -0.02% for 2011 vs 2010, the bigger concern is the 1.7% change over the December 2010 to March 2011 quarter.  Brisbane  is the point of concern with a higher % drop than the weighted average of the other 8 capital cities, but it’s not possible to isolate the impact of the Queensland floods that lead to an overall drop in market activity. 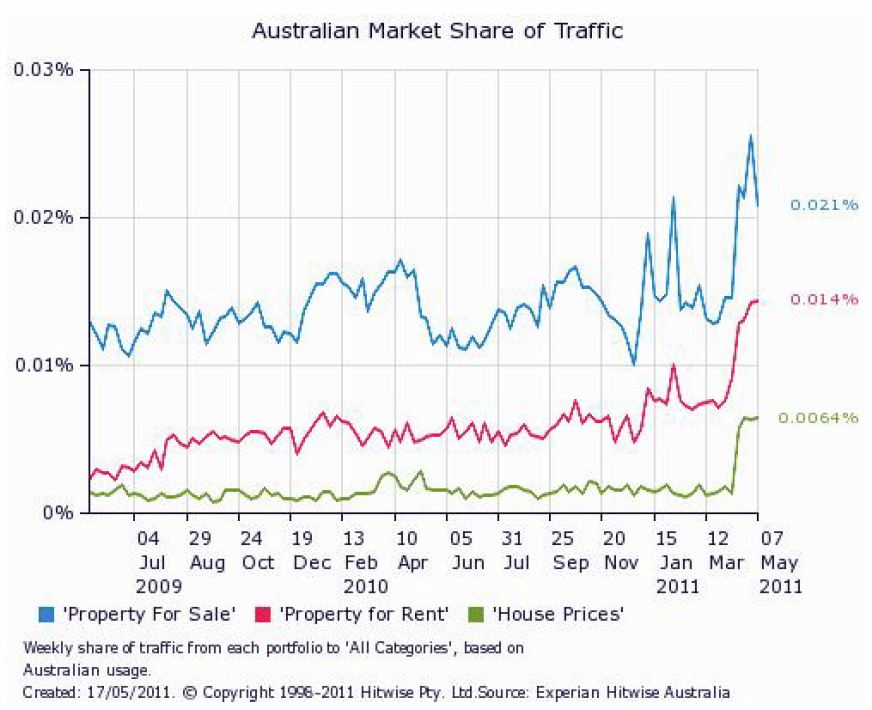 You can download the Experian Hitwise Inspire – Property Searches (pdf)