Working in the SEO industry full-time starts to mean that you begin to look for patterns and relationships between content, links and advertisers and often things stand out as not quite natural.  The background to this article started out with an innocent read of a Miami News Times post on the Russian billionaires battle for Fisher Island, Florida, but all stopped when one embedded hyperlink for “Marlboro” stood out from the text.

There was something about the placement and context of the link that didn’t really sit well within the article and it’s rare for media organisations to link to Tobacco companies and even less common these days to both sell in a romantic image of smoking and mention the brand. It’s sometimes a coincidence but too often than not there is something to the finger prints left behind but the question is who do they belong to the publisher or the advertisers?

The clear point I want to make is that the paper is not directly linking to any of the Tobacco companies website but is actually linking to an internal SEO friendly page focused on that Tobacco brand, but there are a number of other factors that seem to muddy the water a little. If the publisher was linking directly to the Cigarette companies then this post would be fairly clean cut and would have certainly been noticed by now.  The quote from the article that captured my eye is shown below along with the screenshot of the text link and how it doesn’t seem to add to the article or why people would want to read related posts on cigarette brands.

Zeltser mostly listened, recording the percentages Berezovsky wanted to carve from each asset. Every ten minutes or so, he stepped out into the cold March night to suck down a Marl……., his eyes lolling upward with the power of each drag.

There is certainly a benefit for both the Tobacco companies but also the Miami New Times to optimise their internal links for such a high traffic term but the question is how much effort has been put into this process.  Was it just a random one off item in a recent post or has it been something that has been retrospectively done across every post ever written? There seems to be around 62 articles that have had the internal linking treatment by the editors at the Miami New Times, with many of these posts going back to 1991 well before it was a common editorial process to link to related sources or similar posts.  This appears to be likely more a process done by the Miami New Times but the sheer number of posts that mention Marlboro Cigarettes by chance seems too high compared to other brands.

While it seems the publisher is going hard to rank by matching the page title, h1 and onpage text around Marlboro, they aren’t showing organically in Google for any related terms currently so it doesn’t appear to be offering an SEO advantage just yet, it’s possible they are optimised for various local Miami terms as you can see below. There is certainly some method to their madness by creating these static search results pages for capturing extra traffic from search engines it likely violates Googles technical guidelines which state “Use robots.txt to prevent crawling of search results pages or other auto-generated pages that don’t add much value for users coming from search engines.“ 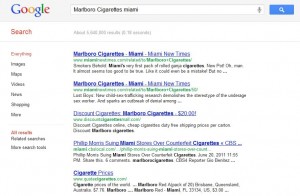 There was something that was really not sitting right about that part of the article, it didn’t add to the article by mentioning the brand and it seemed to be very much promoting Marlboro brand to Miami New Times readers that aren’t all adult smokers. If this is part of an organised marketing activity, then the promotion of Marlboro products within the article US market seems to be at odds with Philip Morris USA and Altria’s Code of Conduct and raises questions where else this might be happening and who is organising it?

The Philip Morris US website information is fairly clear that they have a company policy to deny all requests to product placement in films, television or media since 1990, and have stated they are not using newspapers or magazines currently for marketing, inline with the Tabacco settlement agreements.  So it could be possible that the internal link does not have the support of Philip Morris but there brand is getting exposure so is it a one sided benefit just for extra organic traffic for the Miami New Times?

Is Marlboro alone in this?
No certainly not this is not a sole case of Marlboro having the only presence but they do have a significantly larger number of internal links from the stories to a central related posts section, there are also the following companies that have dedicated search results. It is unclear if these pages were created solely by the web team at the Miami New Times to capture more organic search traffic or requested by marketers to expand the exposure of their brands online, I want to make it clear that these are not natural pages.

Who is left out?

I checked and there are a number of the largest cigarette brands that manage to not be featured in this internal linking by the Miami New Times which makes it stand out as more of an organised campaign than just a few random links to related search results. Previously in price fixing cases it was the one that was left out that outed the price-fixing, it can also be the case that leaving one out in the cold can be just as suspect.

Typically if it’s organic or natural everyone is included if there are a few major players/products left out then it looks more to be something that is organised or planned, this time it looks a little too organised and structured by the advertiser.  The question still is if there are so many other brands that could have been featured why so much focus around Marlboro within the Miami New Times, and how do their readers benefit?

This is just accidental or coincidence?

The interesting part about this internal linking to a dedicated page is that it’s not dynamic, it is a specific static page setup that lists all the stories featuring Marlboro.  Often the internal link within the article does not match the actual page which relates to “Marlboro Cigarettes”, there is often various types of Marlboro brands mentioned but they all link to the same static page.

What about other media sites?

The question is have you seen this or a similar type of strange internal linking campaign happening on other websites, as with Tobacco, Pharmaceutical or Alcohol companies that have strict advertising guidelines and often have to think creatively to reach their audiences.   I’m not saying Altria or any of the other Tobacco companies are or have done anything illegal or are behind this article marketing campaign, but I feel that some parts of this don’t seem to sit right and someone is benefiting, is it just the publisher?