Webtrends has continued to remain a niche player with only around 1,000 clients or around 1.74% of websites using its web analytics platform

Webtrends has been fairly aggressively trying to catch up to its competitors through a number of purchase Transpond (Social Mobile Marketer), Widemile (Testing & Optimising) and ClickShift (Ad Optimisation) and the partnership with Marin Software could easily develop into an acquisition. Webtrends is now the only enterprise level web analytics platform that is still privately owned and not part of a bigger software company but its clear that sooner or later it will either have to merge or be bought out.
MediaPost has reported Webtrends & Marin Software have signed a license agreement which also involves the integration of their technology platforms.  The move is smart as it allows companies to link the entire campaign metrics similar to Overdrive’s Social Eye social media ROI dashboard.
The benefit is that companies can analyse website traffic via webtrends analytics platform to measure campaign performance and goals/revenues and adjust the paid campaigns through their Webtrends Ads which is now powered by Marin Software to improve or optimise their traffic.  The benefit for those using Marin Software is they can now collect details on organic traffic to source new keywords for SEM campaigns and measure its impact on brand awareness for a particular product or service, similar to Google Campaign Insights.
Facebook Integrations
Webtrends announced one of the first analytics solutions for Facebook fan activity and interactions that happens inside Facebook on custom tabs , Facebook apps and shares back in March 2010. Also just recently Marin Software had announced their bid management platform now allows for managing Facebook ads, but has layered over the ability to use algorithmic bidding, advanced audience segmentation and ad testing/rotation features.  The companies are working along very close paths and by using API integration it is easier to pass data between platforms and reduces incorrect decisions made based on poorly aligned data that previously processed manually to find patterns.
Benefits in buying ads?
The benefits of being able to successfully purchase advertising space on Facebook with a pure focus on measurable campaign objectives and optimise the campaign to deliver the most sales or leads does offer an strong incentive for more agencies to examine their platform.  The obvious other benefits is the time saved in reporting and analysis which allows for larger and more complex campaigns to be run more efficient with less cost and decreased wasted spend.
Google Analytics Competitor?
It moves their technology platform closer to a true competitor for Google Analytics which has continued to integrate with DoubleClick and AdWords.  While the recent updates to Microsoft adCenter do improve the market place for advertisers it doesn’t integrate as well as this agreement.  It will be likely that a number of technology companies will be looking at either increasing their purchases of smaller players or examining how much a bid for the two companies would cost. Webtrends has continued to remain a niche player with only around 1,000 clients or around 1.74% of all web analytics installs compared to Google Analytics 48.9% of the market. 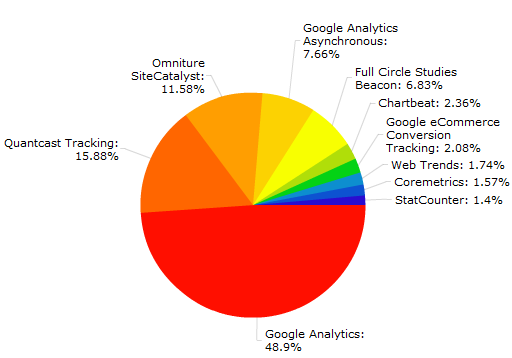 Who would buy the combined Webtrends/Marin Software company?
It would be a smart move for one of the search networks such as Microsoft adCenter, AOL or even ASK to buy the two companies as it will finally allow for a real competitor to emerge to Google Analytics.  The a smarter purchase of Webtrends/Marin Software would be by one of the two leading social media platforms that are trying to show their investors they have a solid business model for earning revenue and their ad network is more than just an experiment for advertisers.  If Twitter or Facebook purchased the combined Webtrends/Marin Software company it would allow for them to expand their Ad network and rapidly scale their value to advertisers.
The dark horse in the market is Apple, which based on Google’s purchase of Urchin which forms the base of their web analytics it would possibly approved by the FTC and European competition watchdogs who want more than one powerful player in the market.  IBM would likely be locked out of any more purchases in the analytics space due to its recent consumption of two of Webtrends biggest competitors.
Webtrends competitors purchased
The upgrade has begun with existing accounts and any new advertisers will have to wait until October 2010 to start using Webtrends Ads for their digital campaigns.  It will be interesting to see what competitors such as Kenshoo, Efficient Frontier or Acquisio might be doing over the next few weeks to counter this technology marriage. I say the analytics market needs some more consolidation and plenty of more agreements to share API access and cross platform integrations would be welcomed by most advertisers and agencies.