The Klout Score is the measurement of your overall online influence, the scores range from 1-100 with higher scores representing a wider and stronger sphere of influence. The Klout Score is a factor of over 35 variables broken into three categories; True Reach, Amplification Score and Network Score.

One of the smarter platforms looking to make sense of the noise and randomness that twitter manages to generate is Klout and well it seems they are on track to keep rolling out some cool new data points to get a better calculation for your standard for influence.  Much of their upcoming roadmap was laid out by Klout in a recent blog post on Klout integrations you should get, one of the more suitable features is the ability to get your Linkedin Klout score calculated seemed like an offer too good to pass up.  Any beta test is always a good way to get an insight into how other people’s Klout score may change once more users are admitted into the beta test, as Klout is ever evolving the more data it has the more accurate its calculations will be.

It is a very simple process to link Linkedin, Facebook or Twitter into your Klout profile and the extra insight you gain makes the effort worthwhile as you will see below when I compare Redbull who is effectively using Klout to understand their social influence but you can see that Monster Energy Drinks is not. The big shift will be when brands/celebrities are able to import via Facebook API their fanpages as some brands have millions of engaged fans that might skew the score calculations in the short-term as it will be hard for individuals to compete or match the hype and engagement around celebrity/brand fanpages. 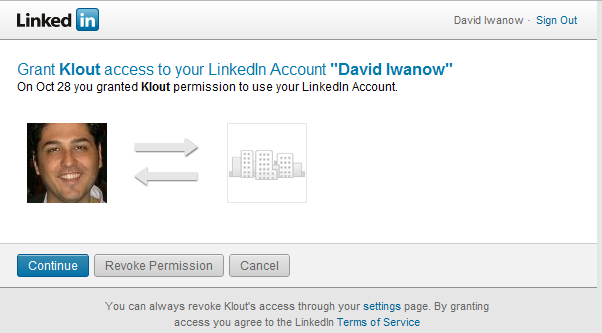 It will be interesting to see what elements Klout is able to import via API which may influence your Klout score as there is often a very low-level of engagement on Linkedin compared to other platforms like Twitter & Facebook.  It’s likely there will be a score around the size of your Linkedin network, the number of recommendations you have received and even how often Linkedin status updates or posts are commented or liked by others in your network.

The only complexities might start to arise as brands and personal users will start to merge and it will become more complicated to separate what metrics or profiles a brand should have compared to a personal user or celebrity. A great networker on Linkedin will have over 500+ contacts but a successful or influential networker might only have 50-150 trusted and engaged contacts, and how might the success of your Linkedin company page start to influence your score if you are a brand?

Klout should not overkill it

Klout has the be careful not to add in too many bells and whistles too quickly such as FourSquare or Myspace as their influence scoring could lose trust if the best way to game the system is to have as many social media profiles as possible linked to your account.  Brands could benefit from FourSquare as part of their Klout scoring but it’s likely that individual users will have as much to gain as many steer clear of the platform due to some privacy concerns and not all mobile devices can use the platform just yet.

Why Can Klout Score Vary?

So how can Klout score vary so much between accounts as well its calculation seems to be based around engagement, driving conversations and true size of your audience.  The great part is that it has shifted the focus around from following anyone and tweeting garbage or a constant stream of one-way messages out into cyberspace.  It’s important to note that even having a lot of followers or RTs does not always lead to a high Klout score and may in fact be a factor that reduces it.  I have around 1550 followers on The Lost Agency Twitter but I have linked my Twitter Account, Facebook and now my Linkedin profile which enables Klout to better calculate my online influence.

Looking at the team over at Redbull they have done a wonderful job of building an amazing audience, with a Klout score of 59 but the true power comes from the message reach is over 1 million via their follower network as each tweet has a reach of around 12,000 engaged followers/fans.  They have a good mix of followers, engagement and it seems they are generating a steady flow of RTs and other actions such as Facebook likes and comments and is growing their Amplification score.  They also have a good level of influence in their engaged audience which shows that they are being followed, listened to, replied to and retweeted by other influencers.

Monster Energy drinks appears to be far behind but in fact a lot of this is because data is missing which is one of the limitations of Klout it can only score your influence if you allow it access to the correct accounts and API data.  So it might be that Monster should actually have a Klout score of higher than 22, but they have failed to take advantage of Klout to authenticate their overall online influence.  They have a slightly smaller true audience reach but because of other data is missing Klout calculates that their Amplification score is very low.  It seems that Monster’s network score for engagement of audience which could be accurate or it might just require them to link their accounts to provide more data for a more accurate calculation.

So my advice if you are unhappy with your Klout score, request a manual update and ensure all your relevant social media platforms are linked into your account to get the most accurate Klout score.