Linkedin is jealous and wanting to be a Twitter RSS reader, as for a networking platform its going backwards....

Linkedin appears to be going to great efforts to upset its users on a daily basis from poor innovation to painful additions such as the ability to automatically update your status from Twitter. I get it you want to be Twitter but in reality you a driving away those who actually login to use your platform and making it another place that people can self promote via an automated Twitter API.

I do try to login regularly to Linkedin to get a quick update on what my professional contacts have been doing but it’s becoming a complete waste of time with the massive time besides the occasional sneak at who has been viewing your profile.  The screen shot below shows of the updates only one is actually a Linkedin update and its to promote an IT Whitepaper but it’s possibly relevant to my audience and was not done automatically by the Twitter API. The other 11 updates shown below sent via Twitter API and it doesn’t really make much sense that my Linkedin network feed mirrors my twitter feed…. 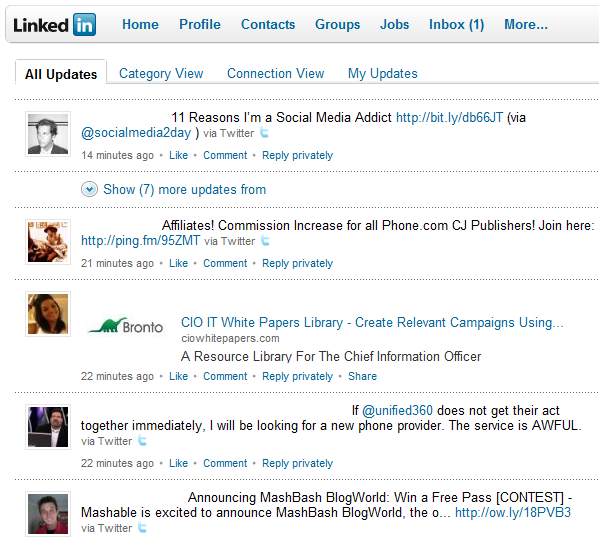 I wanted to ensure that it wasn’t just an odd occurrence so I went back through 4 pages of recent updates from my network including in the count multiple updates that are hidden under the “show (x) more updates from link. The actually numbers appear to be shocking with almost 80% of my Linkedin feed now being flooded from the Twitter API you can see the pie chart shows the impact on your Linkedin news feed. So basically Linkedin have sunk the usability of their social network and useful network updates by allowing people to import their Twitter feeds. 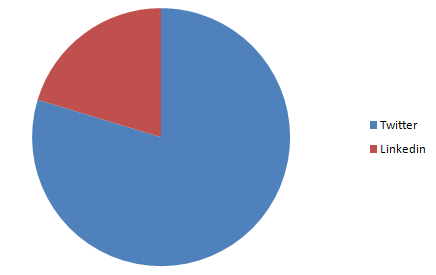 I know you can set it so that Linkedin can choose what tweets to share as your LinkedIn status between “share all tweets” and “share only tweets that contain #in”.  It’s clear that most people just select the option to share all tweets which is fine if you only have a handful of Linkedin connections or don’t use twitter much, but for those who rely heavily on social media its feels like pulling teeth everytime you login to Linkedin. Really I need the ability to filter out Twitter updates or there is no real value for my to login to Linkedin unless i get a message and even then I can just reply directly from within my email. 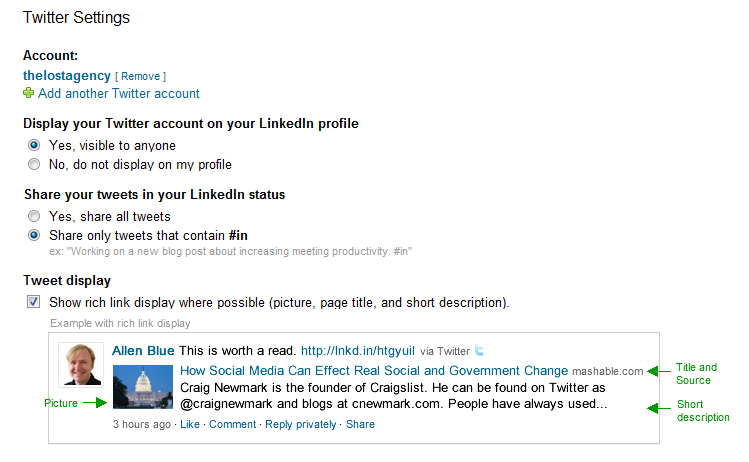 I’m not saying that it’s always such a bad idea but I need the ability to filter out or chose to hide the Twitter updates if I want, it’s a simple matter even in Facebook.  I just select the application and choose to block it and I will should longer received messages or updates that are generated by the Twitter application in my friends feed.  I don’t want to block my friends or hide them from my update, I just don’t want the constant stream of random tweets, scheduled tweets and retweets that carry on 24/7. 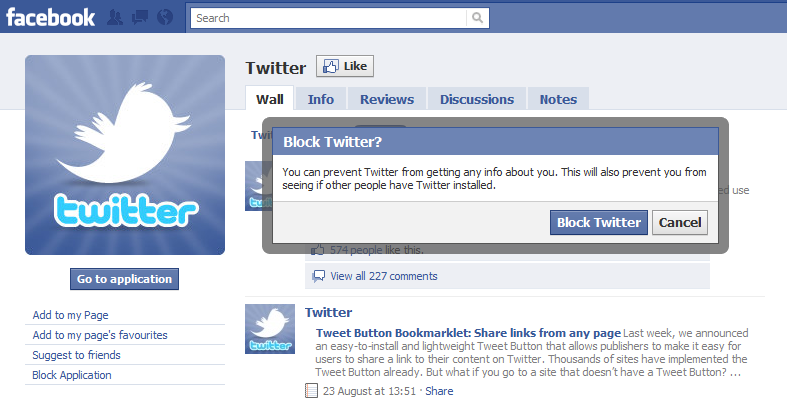 I downgraded my account from their premium business account because the features weren’t exactly that useful, I had sent several inMail messages but found that it didn’t actually make any impact on getting through to the contact as much as a Tweet or contact form on their website did.  I can understand the value for business development or recruitment consultants but most users just won’t get the value and the process to downgrade requires you to submit a support request which is a bit backward.

Linkedin has the ability to grow its platform but people who use it don’t want it to try to be Twitter or Facebook, it’s a place for professional networking and its going to kill your advertising model if more and more users no longer login because the network update feed is just importing date from external APIs. So I encourage you to please don’t share all your tweets in your LinkedIn status and join many others who have downgraded their account to the free option.