Google has released their July 2010 stats from the 1000 largest websites worldwide.  The stats are based on unique visitors using the same data advertisers can measure and research in their Ad Planner platform.  The websites listed feature only top-level domains and exclude adult sites, other ad networks, certain Google sites or those sites who dont have publicly visible content. The other point is that a majority of those websites listed as having advertising available are using Google Adsense or Doubleclick Ads to serve their on site advertising.  Looking at the list in detail it apparently around 12% of the world’s top 1000 websites don’t have advertising which did seem a little strange so I thought I would explore this in some more detail. 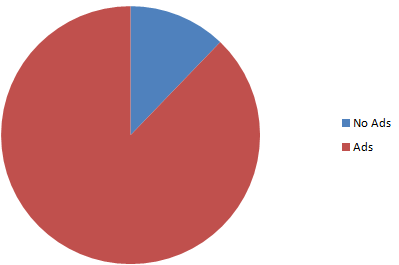 The first site I wanted to explore was ESPN which is one of the world’s top sports networks and ranked #99 in the world’s top 1000 sites as listed by Google with around 21,000,000 unique visitors in July and was listed as having no advertising.  I would be very surprised if ESPN didn’t have any advertising if you have such a large audience and perfect demographics for beer & liquor advertisers.  It did take a little time when the website to notice where the content was due to the 2 huge Miller Lite banners occupying around 2/3 of the homepage, but maybe this didn’t count as advertising? Ok so the website doesn’t use DoubleClick or Google Adsense to serve ads but it’s still features advertising just not currently served by Google. 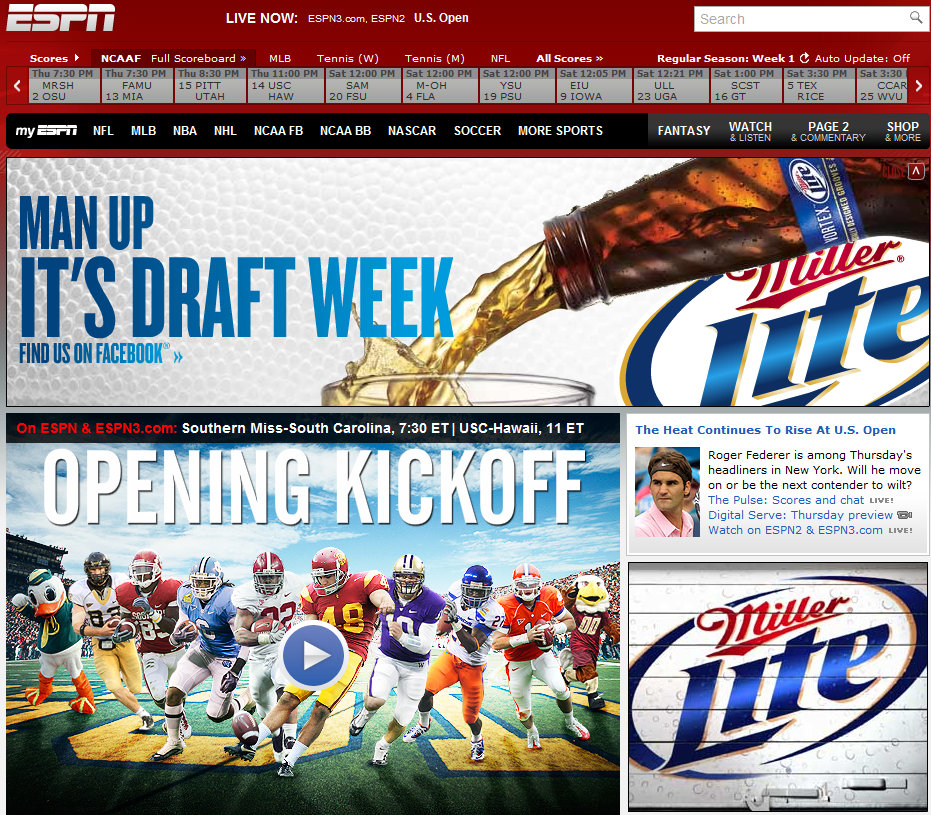 Looking at Twitter.com which is ranked #15 in the world’s top 1000 sites as listed by Google with around 96,000,000 unique visitors in July was also listed as not having advertising.  Twitter has long had its small definition ads as shown below “Twitter for Android” which are clearly advertising as are the Promoted tweets and the more powerful promoted trends which was heavily used by Disney to promote Toy Story 3. While these require the ads to be purchase direct from Twitter and cannot currently be purchase through any of Google’s marketplaces it does show that the list isn’t accurate.

Let’s look at a more mainstream website that is not in a social media or consumer focused, so Whitepages.com was ranked #305 with around 9,700,000 unique visitors in July 2010 and was also listed as having no advertising.  You can see that there is advertising on the home page but once again it’s not served by Google Doubleclick or Google Adsense so that is why it was likely listed as not having any advertising. 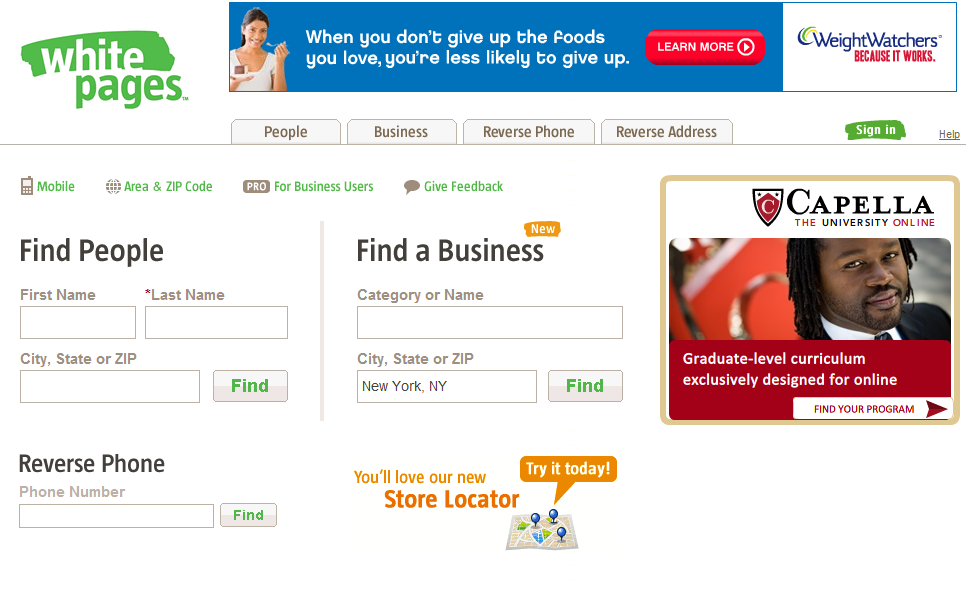 Whitepages.com being a fairly aggressive website when it comes to monetisation, you can see that they have a number of different ad platforms competing for the same space, so this must clearly show that there is no place you can buy space on the site. With one single click on their Find Locations feature its clear that this top 1000 list is once again not accurate as I have seen Whitepages.com are serving Google Ads shown in the screenshot below just underneath the Bing Maps business locations.  To make it easier to spot the Google Adsense ads i’ve market them out with a large red box and a red arrow and so its clear that you can buy space with Google Advertising tools and shows their has no advertising list needs to checked again, just because the ads aren’t on the homepage doesn’t mean the site doesn’t accept advertising by Google. 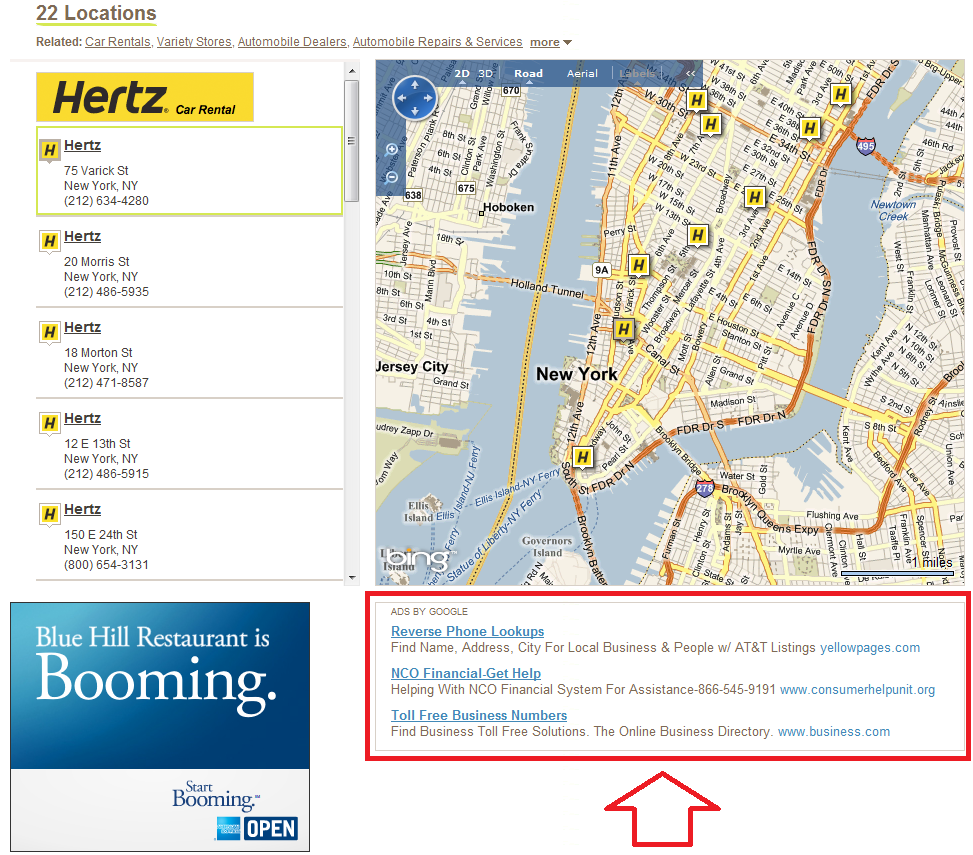 PlentyofFish is listed as #874 on the top 1000 list but is also listed as not having advertising, which is strange as that is how the site makes its revenue.  The dating site is free and relies completely on advertising revenue for its profits and it only took a few clicks to see a Google Adsense banner.  The top 1000 list seems to almost punish websites that don’t show their Google Adsense or Doubleclick ads on the homepage by listing them as not having advertising.  It’s clear that once again the list is not accurate as the screenshot below shows “Ads by Google” so its even serving Ads on the Google content network.

I was looking for a high-profile site that is revenue focused so I picked Boston Globe’s Boston.com, which was my first pick.  The first thing you can see is that there are a number of advertising banners available that you are able to buy advertising space with and the top banner actually is running on ads served by the DoubleClick platform.  This is a another example to show that the July list is not accurate if you are using it as your sole resource to decide what websites you should be targeting in your media planning. 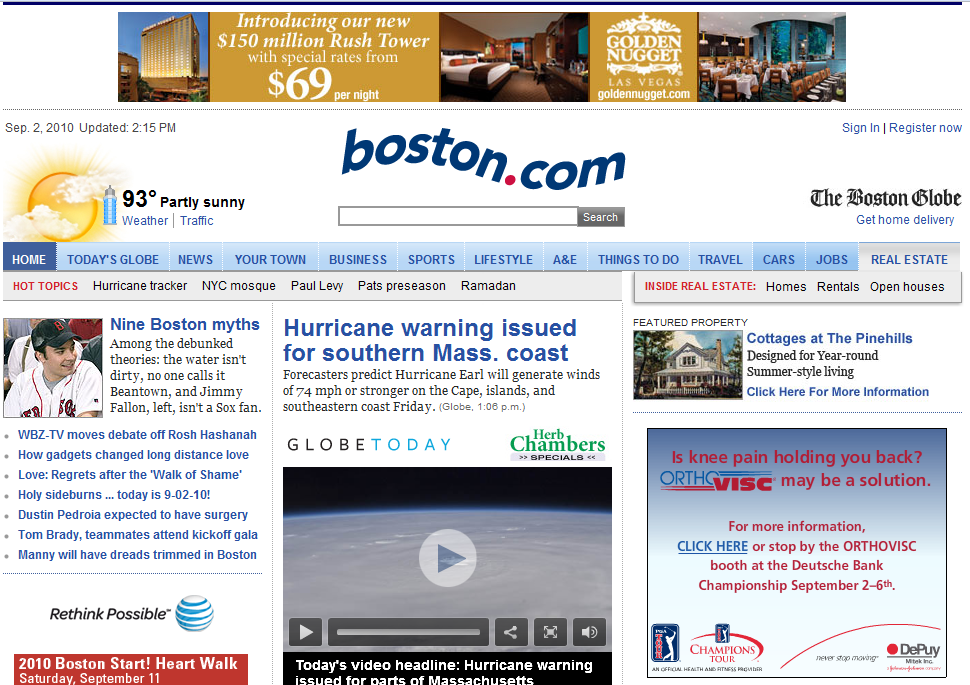 The best option is to use the actual DoubleClick Ad Planner platform and build your own list specific to your region or industry, as taking short cuts and using out of data information like the July 2010 list will lead to poor decisions and may mean that you miss opportunities. The July list is incorrect but it seems that the listings on the ad planner platform are correct and upto date.