Following on from all the hype in Australia last week with the Microsoft’s Cloud Power Forums it’s interesting to see how many big companies are moving in more aggressively to offer cloud based solutions.  Not wanting to be left out of the game it seems that SalesForce.com is in the process of launching its own solution but in a left field move it’s focused purely on the database market not the general market.  In a very interesting move to shake up the larger database players like Oracle it’s actually free to get started on Database.com with up to 100,000 records performing no more than 50,000 transactions per month with no more than 3 users.

It seems that SalesForce.com is following Oracles lead in aggressively buying up suitable platforms they can merge into their own Cloud based future with April’s purchase of Jigsaw database for $152 million that gave them a community of 1.2 million members and was followed up with December’s purchase of Heroku for $212 million giving SalesForce.com around 107,577 apps running on Ruby on Rails.  These types of smart cloud technology purchases increase the future possible platforms that maybe offered on Database.com and also give it volume and access to corporate clients like BestBuy who use Heroku.

Microsoft’s platform Windows Azure also offers a similar platform service SQL Azure but it’s focus is being a cloud based operating system that offers the full suite of development, service hosting under a service management environment via it’s on-demand and scalable datacenters.  Windows Azure is a different platform completely as it offers storage, virtual networks, CDN, application fabrics while it’s SQL Azure offers database, data sync which is closer but not identical to the Database.com solution.  You can usually get a free trial of the Azure platform but it’s not as attractive as Database.com’s offering but is hard to compare as the platforms are like chalk and cheese.

Much of the Amazon cloud platform is built around Amazon Web Services which have continue to expand their product suite to match Microsoft Azure and stay ahead of the competitors with one of the largest range of cloud based services.  Amazon Web Services offer: computational, content delivery network, database, eCommerce, messaging, networking, storage and payments/billing. In what was a very well-timed announcement from the 1st of November, any new Amazon Web Services customer will be able to run a free Amazon EC2 Micro Instance for a year for free which also advises that it’s competing product Amazon SimpleDB is free indefinitely. While comparing the SimpleDB to Database.com is much easier the interesting point is that Database.com doesn’t charge for data transfer which might make the Database.com product much cheaper for companies based outside the US/EU in the APAC region.

Google has led the market in offering a majority of its applications hosted and powered from the cloud and they trying to capture more of that profitable enterprise market with its Google App Engine for Business offering.  The product falls flat compared to other solutions with only a 99.9% SLA you can expect around 8 hours 45 minutes downtime to your application every year which is far too high for a cloud hosted platform and twice what Amazon Web Services commits to. There is very little detailed around the Google App Engine pricing except that each application costs $8 per user per month and there is a maximum of $1000/month.  It seems that they are still working on their hosted SQL database product that will more closely compete with Database.com but that might be sometime in 2011 before it’s available for your applications but that would be closer to what Database.com is offering.

SalesForce.com was actually fairly lucky when they made the decision to use the generic domain Database.com as they are already ranking #8 in Google.com search results for “Database” which means that any advertising or word of mouth campaigns will be more likely to succeed if people can find the Database.com easily.  You can see that Oracle has put a fair bit of focus into database traffic capturing both #2 & #6 but they could potentially do much better and will likely increase their strategies if Database.com continues to climb up the search results.  They are doing quite well for a site that hasn’t been live that long and in such a high volume search term, but they need to continue their success but should focus around terms that include database to get the most impact. 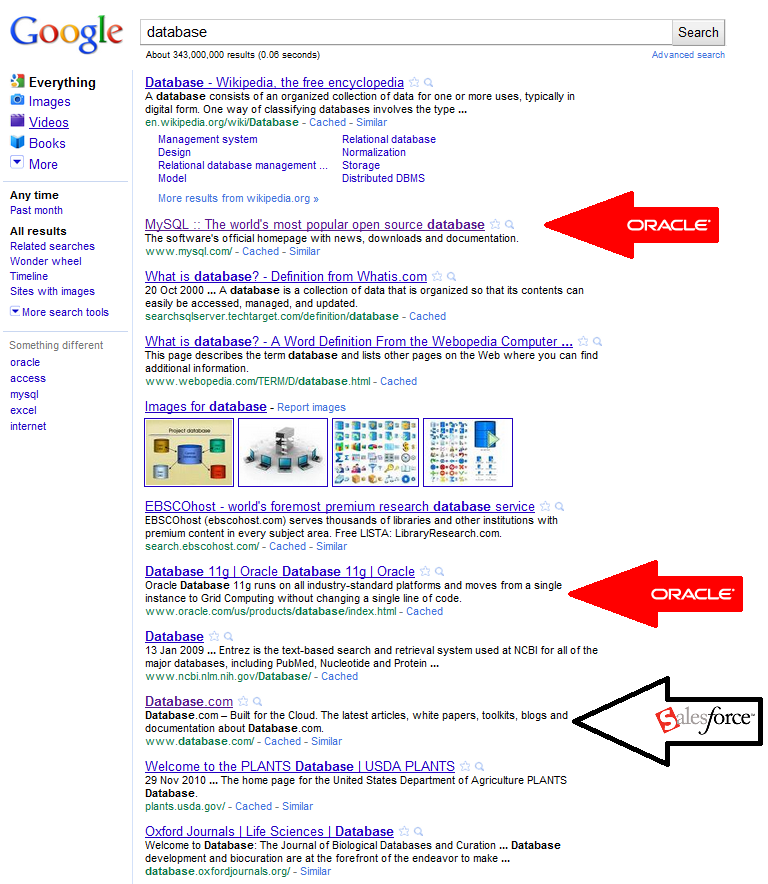 What about Social Media?

Their Database.com twitter profile is a bit weak, being how it’s linked from Database.com but doesn’t feature any updates, no avatar and not following anyone… yet it has attracted so far 180 followers and is growing around 6 on average per day since it was launched on the 15th November. It would have made sense to be a bit more proactive in social media and being a week since the official launch there still appears to be no-one at home which might have cost them the early lead all that PR that the Wall Street Journal and ReadWriteCloud generated last week.

The new Database.com platform seems a great fit with Force.com and SalesForce.com but it still seems that they need a few more pieces before they are able to start to challenge Oracle, Microsoft or Amazon in the Cloud hosting environment but you can expect a busy 2011 for all those who are helping business move their applications into the cloud. It still seems more of a move to counter Oracle than a well executed strategy at this point but keep an eye on this space….

Do something do anything just backup your data and you will be surprised to find out that it can be free!

So while Skype is down it's a shame but I congratulate their team from being much more transparent about the issue and what they are doing to solve it than most companies.

Maybe it’s this year that more open standards are established for some of the key problem areas such as social media and web analytics that makes data ownership more transparent and more angry iTunes users.