From the recent moves it appears that 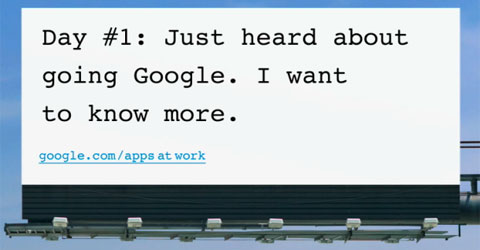 Google has taken an aggressive move from its previous purely online marketing of Google Apps with its new “Go Google” campaign.

One of the most obvious offline moves is the placement of large billboards along major roads in New York, Chicago, Boston & San Francisco.  CNET understand that the idea is to catch the many IT managers stuck in traffic horror spots such as New York’s West Side Highway or San Francisco’s U.S. 101.

These billboards will be changed everyday for a month forming a daily story starting with Day #1: Just heard about going Google. I want to know more.

The interesting aspect to this campaign is how the locations for the billboards have been chosen don’t seem to match with any logical data that I have found.  The closest match is if the location selected is based on top cities by population but the leaves out LA & Houston, which both have terrible traffic problems.

If we further analyse the Google Insight for search data based on state location we can see that San Francisco is top of the list and is also the city where Google was founded.   Boston is likely chosen based purely on the MIT students who will when they graduate will be the next group of IT decision makers, deciding between Google & Microsoft.

Through the WSJ, we have confirmation that Google has annouced a that they have started a global roll-out of this campaign to expand overseas starting in train stations and airports.  The extended Gone Google campaign countries include UK, France, Canada, Japan, Australian and Singapore to increase their current userbase of 20 million users. This expansion followed up from our previous statements that there will be more locations and more campaigns launched over the next few weeks.  We also expect to see many of these cities listed in this blog post will be next as they increase their apps marketing focus within the US.

As for other moves into various offline media, the managing director of Google creative labs Andy Berndt said that at this stage Google Apps will not be advertised in other offline media like magazines, newspapers, television or radio.

The online Google Apps movement seems to be very similar to the successful “Spread Firefox” movement combined with pester power with the launch of a new product website built using their Google Apps Sites product, so they ask do you want to Go Google?

The Go Google website offers handy email templates to assist your creative blocks to help let your IT team know you want Google Apps. It also has 3 non-environmentally friendly pdf posters to print out and post around the office to use for internal marketing, maybe encouraging Friday afternoon pranks?

Some other more business orientated information provided is some product cheat sheets so staff can explain some of the more technical benefits of Google Apps for messaging & collaboration to help the move to Google.

Google are yet to see how aggressive Microsoft hits back to promote Office 2010 through their network of thousands of retailers and partners. Microsoft has already moved quickly to start the online promotion of Office 2010 so quickly that the website and videos were published before the campaign was announced… The new marketing website from Microsoft has stepped up a level with smart product demos, social media campaigns and free technical previews of the software.

Microsoft has shown a departure from the past where only a inner circle would get a chance to test and preview their upcoming software so are Microsoft are starting to learn from how Google that good word of mouth can be a cheaper and more powerful that traditional advertising? So who will win the hearts and wallets of IT administrators, Google the traditional online going offline or Microsoft the traditional offline pushing online?

The process to signup Google Apps Premier Edition for your domain is easy enough:

So we suggest that you give Google Apps Premier Edition a try today.

Gmail now allows you to recover your password by SMS

Official Google Blog: Network effects: Introducing the Google Apps Authorized Reseller Program Google is pushing ahead with its plans to…