So lets review the new patents and which products would they offer the most likely fit and benefit to and even how they could further expand the product to be a category killer.

Mediapost has once again take the time to draw together several key updates to Google’s January patents and what it means for future “targeting” of ads makes for a very interesting opportunity for online marketing and how well it can target you.

The Google engineers appear to have had a very productive Christmas with several updates to their patents filed in January but there are several patents that appear to be of interest for further expanding and improving their advertising products:

So lets review the new patents and which products would they offer the most likely fit and benefit to and even how they could further expand the product to be a category killer.

1) The main point around this patent is that it is also using geographic targeting which can further refine and measure response rates to ads and assist with profiling.  The issue about this patent which is of concern is the abstract which reads “the advertisement based upon profiling of users and networks” and it shows the true potential of the product to be a category killer.  The reason is that better delivered ads gain higher click-thru-rates, better conversion rates for advertisers and offer a better user experience for searchers, but this can depend on the intentions of advertisers when using such powerful targeting.

Google advises that one of the purpose of the patent is to reduce the effects of banner blindness where users begin to ignore ads, and also reduce duplication but still reach the largest possible target audience.  It will also assist by changing ads displayed if users continue to ignore them, to something more relevant to their search or websites they have previously visited.

2) This patent appears to be around optimising the value of popular ad spots and placements but also seeks to reduce the unsold stock currently available for markers by more efficient allocation and bidding, it is focused on improving Google’s content distribution networks.  The other element is that you are no longer just bidding and if you get the right price you get a place, you can now have a live auction environment that can dramatically inflate prices paid for advertising placement by advertisers.  The product seems suitable for Adsense which Google is aggressively promoting as it expands its content and affiliate networks, but this product can also relate to Radio & Television ads…

3) It appears at this stage that this is just an improved version of the current YouTube popup banners that are shown over each video, as it takes into account keyword and search behaviour when selecting what video to display.  What makes me think that this patent brings YouTube closer to competing with Hulu is part of sentence from patent claim 3 “video playback controls for simultaneously controlling playback of both the digital video and the video overlay advertisement”. It appears that this function could be similar to Hulu users do not have the ability to skip the video advertisement and the ad and video continue to be played but cannot be skipped.

4) This patent is one of the more interesting patents as it allows Google to get around mobilephone carriers who may charge or restrict access to users locations with a solution that calculates users geographic location by “observation/analysis of packets transmitted or received by the access point”.  This can also already be done with Skyhook Wireless by using the MAC addresses of nearby wireless access points and proprietary algorithms. This is very suitable for Google Maps, StreetView and the ability for Google to serve ads from business relevant to your current geographic location.

5) This patent seems mostly suited to Google Maps but primary for mobile devices who don’t always have access to the internet, and also appear to allow for overlaid items to be also shown when offline.  Being how devices such as the Verizon Droid or Google Nexus One can be heavy data users the offline storage or caching of map tiles has an advantage.

6)This product is perfect for Google Goggles and Google Maps StreetView, as it appears to have the ability to offer a augmented environment that can display property information, and add additional layers which may include one or more promotional features “ads” within the users view.  The overlaid information may contain a useful details such local landmarks like Circular Quay along with next Ferry times to Manly as it knows your Google calendar has your next meeting at Manly.  Where the product’s potential gets interesting is that the weather forecast maybe sponsored by Allianz Insurance or local businesses that match your preferences may be able to show sponsored notifications. 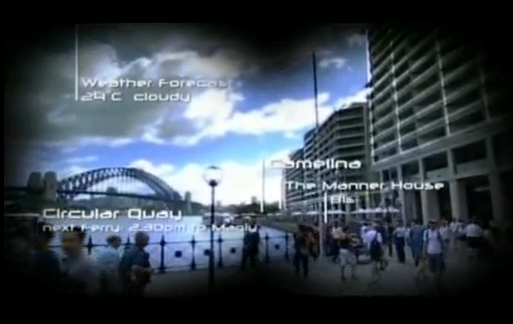 There are already companies working out how they can use augmented reality and clicking on the above image will take you to 35 excellent examples of awesome real-life examples of how companies are testing and encouraging virtual worlds.

The patent also appears to allow for the identification of features such as billboards or banners and replacing them with updated or new advertisements.  But this presents the problem TV broadcasters have battled for years when overlaying stadium sponsors with their broadcast partners, who is entitled to be shown? Imagine if you can now buy dynamic billboards in StreetView or that old bus shelter with the last years ad can be updated to show your new campaign.  There is also potential for guerrilla marketing where your competitors may buy sponsored placement outside your store or building.

Not to be left out it seems that even Yahoo’s Flickr is joining the augmented reality with a new patent that offers the ability to combine maps, photographs and notes with your captured photographs.

So how many of these patents will be fully utilised or is it a race to see who can invent the most patents to protect any possible future developments by competitors?