Osama Bin Laden's death has been confirmed by US President Barack Obama. 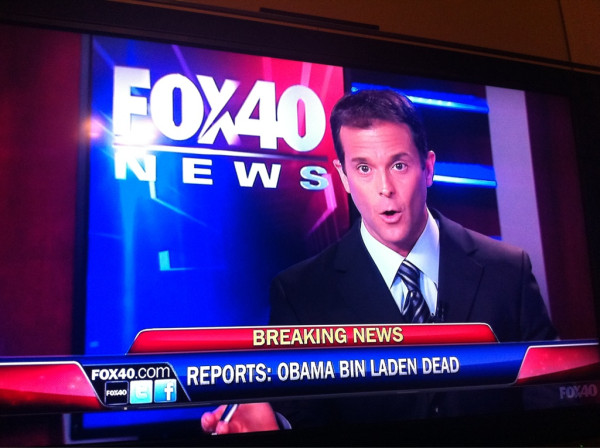 In one of the biggest news stories to break via social media, Osama Bin Laden’s death has been confirmed by US President Barack Obama.

The news has quickly drawn large crowds celebrating outside the White House, Times Square and World Trade Center as the news was confirmed by the US President. The crowds continue to grow across US cities as their citizens spread out into the street to celebrate what might be the first historic step in their fight against global terrorism.

In one of the most embarrassing moments Fox News feed has advised their US audience that Obama Bin Laden is Dead, not the correct Osama Bin Laden is Dead. In what is such a ground breaking moment it’s a shame that not a bit more care was taken to ensure accuracy of the announcement considering they had 11 years to prepare for this moment.

Google Trends is not quick enough

In breaking moments like this it’s clear that the Google Trends product that updates hourly is simply not quick enough to capture moments breaking news moments like this. It took over an hour for Google trends to recognise Osama Bin Laden as a hot search term.

In what is seen as the source of breaking news there was a significant delay before it was showing as a trending term.  In a ground breaking moment ever single tweet in my news stream was related to the Osama Bin Laden news but it was still not a trending term.

Their real-time comments server was serving over 14,000 real time streams per minute as the news of Osama Bin Laden’s death was announced. This was announced 30 mins prior to Twitter recognising the news was a global trending term. It seems that solutions like Echo StreamServer are a better way to gauge what is breaking well before platforms like Twitter or Google pick it up.

Even the world’s largest video site has not been a good source of breaking news coverage as users have to upload poor quality footage as media organisations fail to supply HD versions. This is a miss opportunity for media to fulfil users demands for news about the event who may not have access to TV. Below is the official WhiteHouse clip from the US president announcing the killing of Osama Bin Laden.