In a single statement Alan Joyce has managed to remind it's shareholders they just approved his $5 million pay packet by destroying their investments... 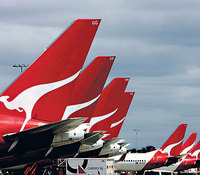 Following on from the recent fights with unions Alan Joyce has made the decision that has killed the Qantas brand in Australia and possibly destroy the Australian travel industry at the same time.  The fight has been dragging on for month’s but this extreme move has taken Qantas from one of Australia’s strongest brands into the gutter with a single statement that they are grounding all Qantas flights effective immediately.

Qantas has advised passengers not to go to the airport until further notice!

The cards Alan Joyce is now playing involves shutting down and killing off Qantas “part by part” and the staff lockout and grounding their entire fleet has be the only insane and stupid response that the CEO of Qantas could have done. This move is a direct strike at the Australian traveller and just adds them to the pile of the 70,000 passengers already disrupted by the ongoing union disputes. The CEO of Qantas has said he will ensure this grounding of the carriers entire fleet of 108 aircraft goes on for as long as needs to prove it’s point, even with it’s $20,000,000/day price tag.

So who is effected by this tantrum?

Atleast 10,000 passengers per day within Australia will be affected immediately plus thousands of travellers, across the world who are travelling to or from Australia on Qantas or it’s One World partner members. The impact on the Australian tourism industry cannot be underestimated based on the number of travellers that Qantas brings to Australia. The Australia tourism body has called for help from the Government as it’s going to directly affect it’s $94 billion tourism industry and the 500,000 people that are directly employed by tourism operators. As a precaution Qantas has grounded their fleet immediately and this has also impacted the Commonwealth Heads of Government Meeting that is due to finish in Perth this weekend.

What about One World members?

It seems likely that all travellers passing through Australia on international flights or relying on Qantas will have their plans disrupted.  This announcement will appear to impact any travellers flying on the following One World airlines via a code share agreement with Qantas:

What are they doing about it?
Qantas has started off by saying that it is offering refunds and possible ticket transfers to passengers who find their flights are cancelled due to the grounding, which shows that this action will last for a longer period of time that most travellers want.  Qantas has said they will offer hotel accommodation and alternative flights to those travellers who are mid-trip and can’t get home due to the Qantas grounding.  The issue is that due to the sheer size of this impact there will not be enough accommodation or alternative flights available to deal with all the passengers that are going to be left stranded.
Are you covered?

Qantas have said refunds can be requested anytime until 31/1/12. They are advising customers not to call them on 13 13 13 if possible, and just check here for more info: http://bit.ly/QFdisrupts

How are people responding?
Across social media there has a massive spike in discussions both humours and angry around the Qantas grounding announcement, with the number of tweets featuring Qantas doubling every 30-40 minutes.
Virgin Australia respond
In a great PR move Virgin has started working on a Special “Stranded Passenger” recovery fares for those with a QF ticket and away from home will be offered…. available here.

One Reply to “Qantas destroy’s tourism by grounding all flights”