There has been some interesting thoughts around using Facebook Ads to buy fans, traffic or leads and I thought I’d dig a little into why I don’t mind using Facebook Ads. SEJ just posted a larger and more detailed analysis on it that you should read! But I wanted to counter some of the negative points people seem to be making around the topic for the past few months.  I could be wrong but feel many people weighing in on the issue likely fit into a few groups:

During the second half of December 2013 I decided to run a small Facebook ad campaign for my Travel affiliate page to see how I could try and lift it’s audience numbers but also increase engagement on the posts.  I also wanted to see if I could get some improved organic fan growth and post reach due to a larger audience due to targeted Facebook Ads.

The purpose of the Travel page is about brand building and sharing great and interesting content so I don’t really expect to get much benefit at this point or that this will massively increase the amount of clicks back to my website.  The page had done some sponsored posts on and off over the last year with some success with uplifts in clicks, likes and new fans but a majority of it’s growth was from like buttons within my travel sites.

How much was spent?

I thought it was higher but when I checked FB Ads reports it was actually only US$76.14 that was spent during this trial.  Sure that might sound like a lot to spend on Facebook Ads to some people considering this is just my travel affiliate brand I run but I wanted to have some fun and do some tests to see if it could scale up more. You can see the chart below with the scale to show you on average how many “likes” I got per day, in the end the campaign generated around 150 new fans with a cost-per-fan of $0.51 which I don’t think is too bad in such a competitive vertical as travel.

In my own tests I’ve found that often Google AdWords fans often visit, puke and then leave never to be seen again, this is great if you can provide them with the content/information they were needing but if you can’t satisfy them you have lost them forever. Also Google AdWords CPC rates in the travel vertical are downright insane based on last time I did some research in that space.

Yes I know you can pay far less but this was not a test to get the cheapest fans possible it was about trying to get quality fans.  I have previously managed to pay $0.01-$0.05 per fan in campaigns I’ve run for clients before but there is a limit to how many of those fans you can attract so you have to increase the amount you are willing to pay for a fan if you want to scale up or want faster fan growth.

How was engagement changed?

So why do I prefer Facebook Ads over Google AdWords? Well the biggest thing is I’ve found that Facebook fans stick around for longer and engage with your content and your community.  So I thought the easiest way to explain why I bothered to use Facebook Ads to attract some new fans is to show what is the longer term impact after you stop your campaigns.

In the graph below I have clearly marked where I was running Facebook ads and the engagement “likes” on the posts takes almost a week but then spikes right up.  I know I was experimenting with daily budgets along with CPM/CPC bids which seemed to attract more engagement but maybe it could have been more structured.

The upside is that you can see once the Facebook Ads stopped the engagement didn’t fall off a cliff as I expected it might. The shifts in engagement are also linked to the types of content I’ve shared as images and videos typically get far better engagement.  I didn’t include Post insights as I noticed the reach and engagement varied a lot depending on day/time and post content theme, also I felt there was enough information in this post but the main reason was Facebook Insights is now be playing up and missing any interaction data before 6th February 2014. 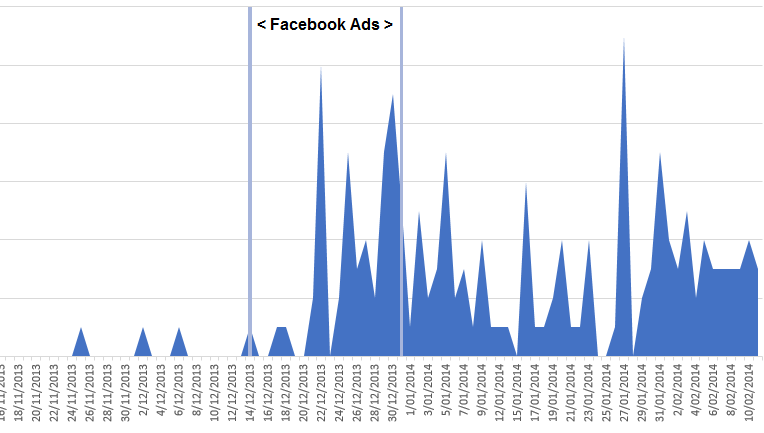 What about other actions?

An important part of Facebook ads is that they can also offer you far more metrics to track than just clicks and likes. It’s important if you want to measure the success of your campaign you look at how some you are often getting bonus clicks along with new fans.  This also highlights the importance of having various types of media used in your posts (photos, videos, text, links) as users like both choice and variety. 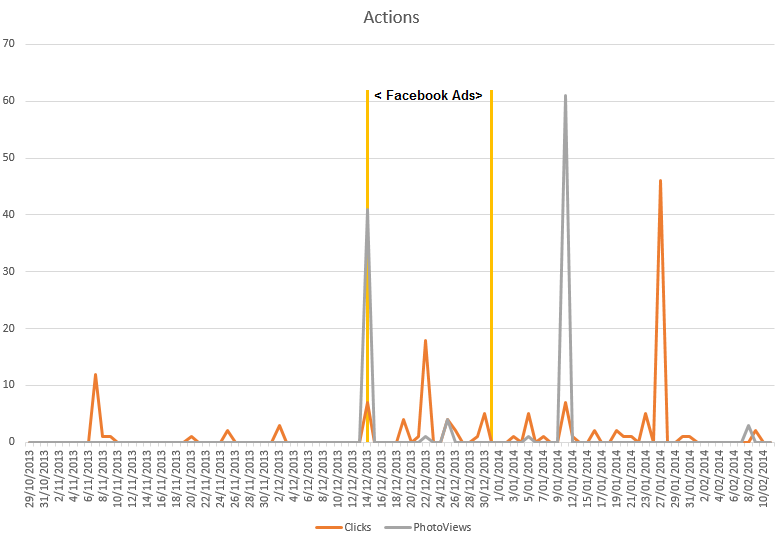 I was able to use BufferApp to easily track the amount of clicks on posts, I recall that there was a small handful of links I shared manually without Buffer but I don’t expect they would have got that much better interaction.  The big insight that even with increased audience size and increased engagement on your posts don’t always expect your audience to click away from Facebook.

Consider Video or Image content that they can interact with via comments, likes or shares and you will fine far better engagement rates and your campaign metrics will actually look decent.  Don’t rely on Facebook posts to drive as much CTR on your link posts as Twitter or Google+ will generate. 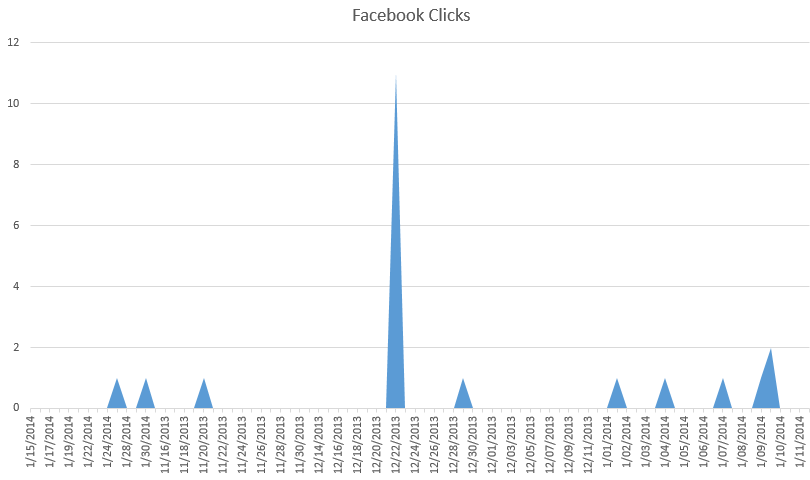 What do you think about using Facebook Ads to buy Fans?

So I’ve outlined some data points from my own experience do you agree or have you given up on Facebook ads? Before you get too bent out of shape of having to pay for something that is once free think about Google Organic traffic and Google AdWords… do you get bent out of shape if you have to buy traffic from Google?

One Reply to “My Insights on Paying Facebook for Likes”