The problem is that the text on the page reads Live Tweets about Austrailia, not the correct spelling which is Australia and the World Cup 2010 portal is kinda average....

When I first heard about this World Cup portal, I had thought Twitter was taking its #hashtag and trending topics to a new level with its country special Twitter World Cup 2010 page.  The central element to the Twitter Worldcup was that it feature a page for each nation, but all it seems to contains is a screen of random tweets around #Aus it contains one big spelling failure.  The problem is that the text on the page reads Live Tweets about Austrailia, not the correct spelling which is Australia, this is a bit of a gaff for a company that is promoting the portal to such a large audience.  Just like brands don’t like it when consumers/journalists misspell them it is potentially more offensive to misspell a nation on its official page, but it could have been worse they could have said Austria….

To reduce the impact of other sites using its stream of news and updates, it is a smart idea to build their own Twitter World Cup 2010 portal which can gather all the tweets relevant to each nation and allows fans to quickly read their nations tweets streams. The problem is that a majority of the tweets seem to be RTs of annoyingly repetitive “if you are from #Aus”, the idea was good but the execution seems to have been a little lacking as there is so much more information that could have been featured.

The most common tweets being shown on the Twitter World Cup 2010 page are just tweets with as many countries listed as possible which seem to distract from the possible benefit. Since Twitter is running the page they should be able to demonstrate their improved ability to handle spam and understand users who are being supportive and those just spamming every possible team to promote their profile or commercial products.

It doesn’t seem hard to implement a basic spam filter that would eliminate the multiple country tweets, there has to be a possible for Twitter to use some relevance score that can use multiple factors such as users GEO or Profile details matched to their #hashtags. It is likely that these tweets may contain a lot of NSFW material and is accepted just because of the #worldcup hashtag.
Previous games tweets are just live twitter streams
What would have been cool would be if the link to previous match showed historic tweets but it just shows live tweets split into 2 columns one for each country, this is not something technically ground breaking.  Once again Australia is incorrectly spelt which compounds the failure to check for spelling errors across the whole site. 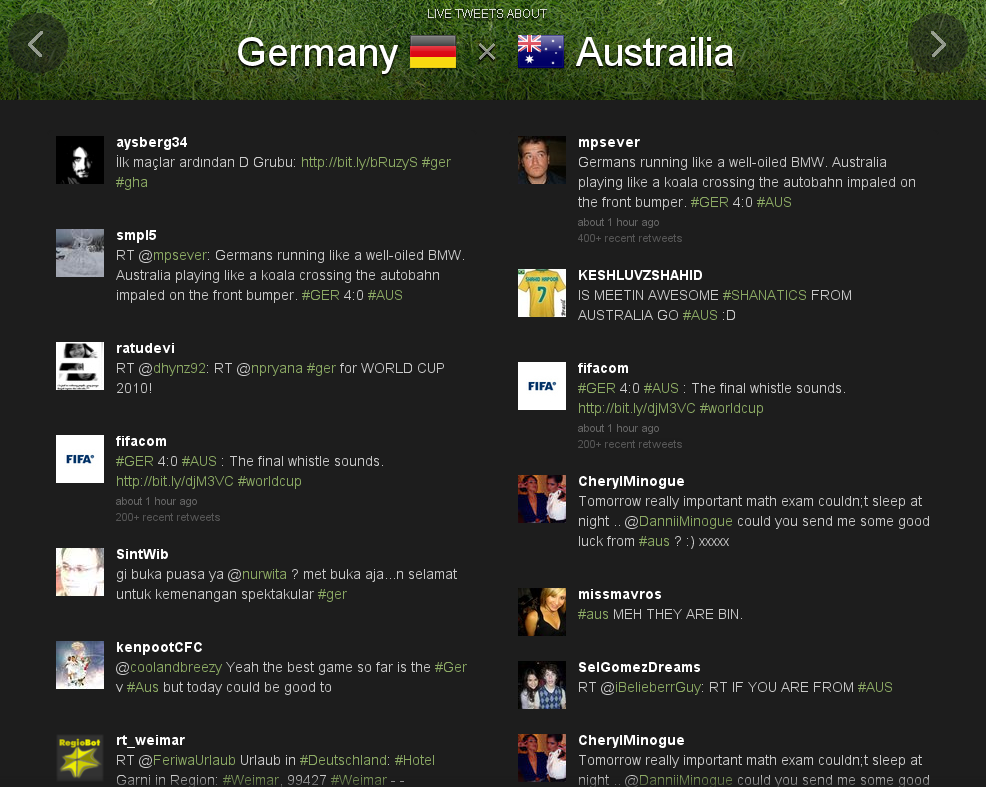 So overall outside the failure to spell the nation of Australia correctly the site seems a little amateurish for a company that has the most to gain from a great World Cup portal, otherwise I might just goto another sports site like CNN Sports or even Facebook to get my sporting updates. It is likely this will be a more common item for twitter to setup for large events or important occasions but they need to ensure more effort and care goes into future portals.