AdAge covered some details about the Twitter and NFL Agreement on promoted twitter video pages in September last year but this is the first time that I have seen them until this point.  It certainly pushes Twitter into the space of being able to better commercialise brands content marketing activities and potentially steal advertising revenue away from YouTube. It could also create a whole new medium for Twitter that Facebook & Google+ can then look to borrow “steal” for their own promoted videos. 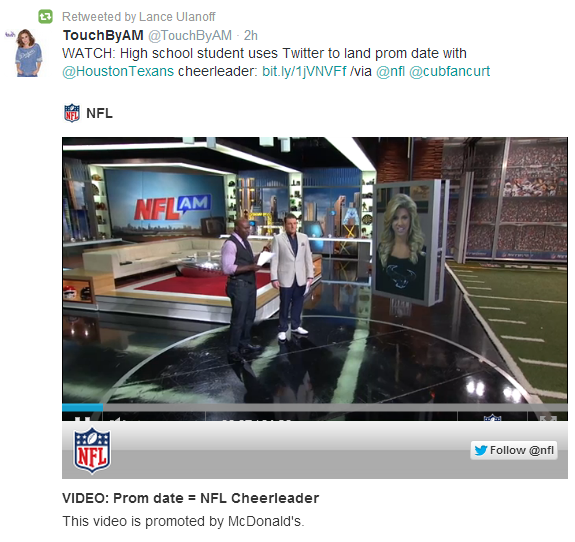 If Twitter can make this work there are likely plenty of other sport based content marketing channels such as Australia’s AFL, English Premier League, PGA Tour and ATP World Tour that will be chomping at the bits to get in on the ability to drive more revenue from short video segments.  I think the strategy of focusing on sports is a perfect fit for Twitter and could potentially drive a lot of revenue to them and their content partners.

It’s interesting to see that they don’t have the standard Twitter Promoted message seen in the examples shown last year shown below for Verizon. I’m wondering if this is temporary message as I think the un-styled disclosure message  shown above “This video is promoted by McDonald’s” looks horrible and fairly amateurish compared against the original and standard promoted tweets. 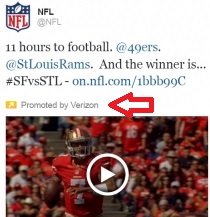 If you click to play the video about the Twitter fan getting a prom date with a NFL Cheerleader you are run through a 8 second McDonald’s breakfast pre-roll ad.  So this certainly confirms you are consuming content that paid for by McDonald’s, the sad part is that current ads don’t appear to be using different pre-rolls based on time of day.

This means that if I’m viewing the video it could be matched to my local time zone which is Europe and since it’s 9pm run a pre-roll ad about late night menu options at McDonald’s.  I checked and it’s currently 2:34pm in Houston, Texas so it’s not even breakfast time in the US which I think would have made for a far more effective pre-roll ad.  I know McDonald’s is pushing it’s breakfast menu but some tailoring of pre-roll can go a long way. 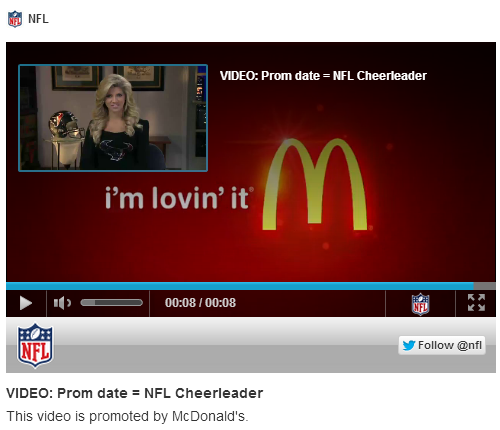 Compared to Instagram’s very public stumbles when it came to launching their new promoted ad programs, I was also surprised that I couldn’t see any negative Tweets back to the @NFL account about the very obvious McDonald’s promotion appearing in their news feeds. So what do you think you pre-roll ads coming to your Tweet feed?