The auto data is more searchable and the usability has also been greatly improved with a much lighter and quicker loading interface than the old Autos.MSN.com portal

While the world turns back to Detroit for the 2011 North American International Auto Show, we see a new feature being rolled out from Bing that adds in an enhanced auto result to it’s decision engine. It seems that this move follows their Farecast platform that presents much of the information you need to book flights, hotels or holidays, but is not yet as closely integrated within the search results.   It is interesting that this Auto product wasn’t released sooner as it does seem a much smarter way to search for a new car or fall in love with the Ford Mustang once again.Below is the current standard Bing search result for a “2010 Ford Mustang”, but you can now see a new tab “Autos” showing just next to “Web” at the top of the search results.  The new Bing results don’t currently blend the Auto results into the standard results but keep the results more transparent by segmenting them into a new Autos tab. 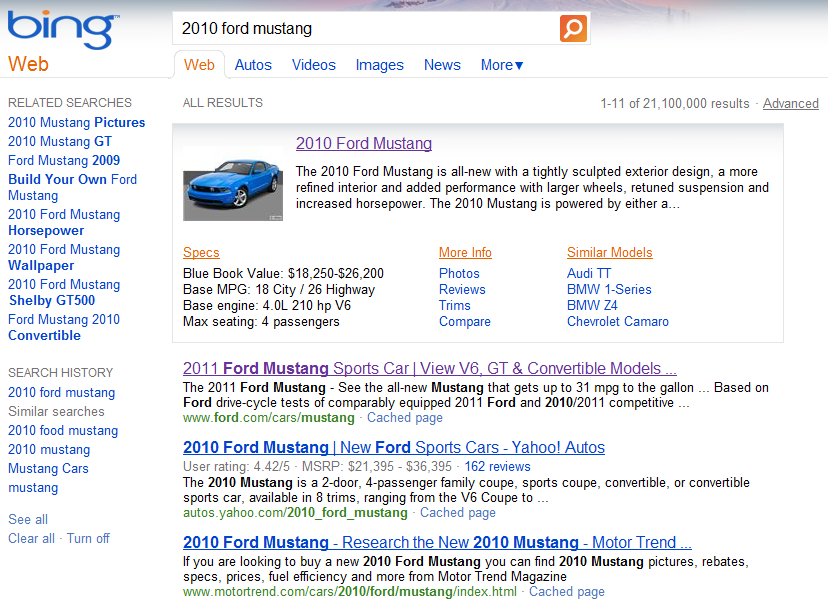 The new Bing Autos results are shown in the two screenshots below and are vastly visually different from the standard Bing results but the primary bits of information are already showing in the standard search results but this may increase as Bing understands user behaviours and preferences overtime. Just as Google is able to adjust and adapt their product quickly due to the sheer volume of users testing it’s platform as Bing grows expect to see more radical changes to new products like Bing Autos occurring faster.

You can see from the hyperlinks from the page that much of the information is still being drawn in via Autos.MSN.com but using the Bing platform they are able to make the data more searchable and the usability has also been greatly improved with a much lighter and quicker loading interface than the old Autos.MSN.com portal. While much of the owner reviews information is been linked from Autos.MSN.com it still prevents a lot of information in a nice clean, clear and concise way and it’s mostly free of advertising except for 2 at the top right side. The auto reviews tab does allow for some fairly cool analysis of your car with owner ratings & reviews and even video reviews of your car.

How does Google compare against Bing Auto?

The closest comparison that I could find was Google Shopping tab but that seems to be mostly occupied with Die Cast Metal Collectibles and some Ford Mustang spare parts, not really anything spectacular at this stage.

What could make Bing Auto better?

While it’s clear that the platform has just launched and will certainly undergo some massive changes, here are a few initial points that I wished had been there at launch, including a comparison engine where you can view multiple cars side by site.  I can understand that they are being more commercial sensitive to their commercial partners and don’t yet want to ruin them by launching a loan comparision website as Google did covered in more detail in my post Google Mortgage Rates.

The left side menu offers 3 primary filters for Auto Results

It’s very interesting to see how Bing is working to differentiate it’s platform from Google but based on this Auto platform they could expand quickly to other verticals quickly and easily using data within the MSN network.  I suggest you check out the Ford Mustang and have a play around with their platform, just remember you may have to set your preference for country to USA by the link at the top right if you are based outside USA.

Bing for Mobile does the Verizon Android users proud with this update and look forward to more devices and carriers soon....

Bing refines it webmaster tools to be better than Google and improves the transparency of Bing.com for marketers and businesses

One Reply to “Bing Auto SERPs”