it might be a rushed response to Google Plus but it's here and you can use it now unlike Google+ which is still in limited field trial mode....

Facebook has finally announced its long-awaited videocalling platform that allows its users to call using each other within its messaging platform which quickly closes the likely growth of Google+ Hangouts and Gmail video chat. Facebook’s audience of close to 696,000,000 users allows Skype to double it’s audience and market share in a single announcement to bring the total user base to well over 1 billion accounts worldwide.

While the announcement is rumoured to be a little rushed in response Google+ hangouts the platform is certainly welcomed by a number of users who have never enjoyed the Skype interface and the simplification will certainly make videocalling much more attractive to everyone and the platform has likely been in development for sometime.

Microsoft’s recent buyout of Skype now starts to make more financial sense as it now has the largest communications platform in the world and places it so far ahead of Google and Apple that it will become the dominate communications platform over the next few years.  There is already talk of premium features being rolled out around the new communication platform that could include options such as group chat, higher quality video and the ability to save your video chats forever within Facebook. There are a number of platforms such as Goto Meeting that might have a bit of a concern as the platform has potential to shake up their business model as Microsoft will surely expand it’s business functionality over the next 6-18 months across its operating system and Office suite. 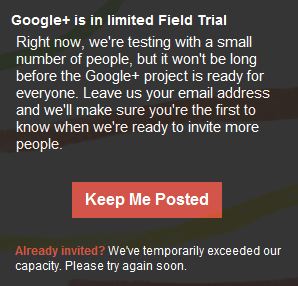 The platform is slowly being rolled out to everyone over the next few weeks but unlike Google+ if you don’t want to wait you can jump the gun and enable it here, this is unlike the Google+ experience that is still in a limited field trial and struggles to scale up quickly enough.

So while a number of people have found the new Google+ project a great experience the issue is that the very nature of how many people can’t access the platform including those with premium paid Google Apps accounts they might have missed the boat again.  There are an endless number of complaints from people who have invitations to the new Google Plus platform but are unable to access it yet and there is also a stream of spam and malware related sites that are seeking to take advantage of consumers by offering them “invites” this includes online pharmacy scams first reported by Sophos.

Another annoying aspect to Google+  is that a number of work arounds that have been discovered by users are being progressively disabled by Google as they are discovered, there is also new rules that forbid companies/brands from creating an account.  There is certainly something missing in their thinking on how to attract users away from Facebook by locking down access but they are also taking some insight from Facebook who has always banned companies from creating personal pages but Google is apparently working on that so who knows.

So it almost seems that unlike Facebook which is encouraging people to use its new features via shortcut links and then progressively upgrades everyone, Google Plus is just meant for an exclusive number of people and I see this as one of the many reasons platforms like Google Wave failed… it didn’t have enough scale….

The Facebook blog has published a short overview of the new platform along with some other updates including group chat and a new always on chat sidebar that always lists your most common contacts, bringing the Facebook platform closer to a single message platform. The new updates provide some added benefits but the always on chat sidebar is a little distracting but is smart enough so that it only shows on larger screens so as to not annoy it’s users by trying to squeeze too much onto one screen.

Microsoft last year enabled MSN Messenger to integrate with Facebook chat so this is just one more custom integration between their two platforms that make it harder for Google or Apple to entice users away so is this the final chess move before checkmate? 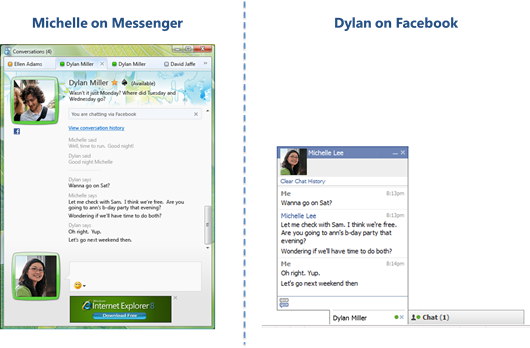 I have done a quick video review of the new Facebook videocalling platform below.