Google has now enabled iTunes and Android apps to be shown in a specific niche of search queries, but is it the start of something bigger?

Earlier this week Google Mobile blog announced a new way to increase Google users access to mobile Apps, this time via their search platform.  To ensure no competitive issues are raised by respective industry groups and competitors such as Apple, and they can encourage more users to get used to using Google.com to find their apps Google offers both Android and iPhone apps.  It will be interesting to see how Apple reacts and if it may restrict the features of the new search service as it bypasses iTunes and takes users direct into the app store, reducing how much they can market other apps via their featured apps screen.
Google keeps users
This is a smart move by Google to offer a mobile focused search result as it allows them to keep iPhone users within its search network longer before they are funneled off to iTunes to download the app, it also means they can possible wind down the support and resources they pour into the Android Apps marketplace. The interesting part about the Android market place is that it is also setup to ensure any direct links don’t offer any of the developers an increased seo benefit via the structure of its url. 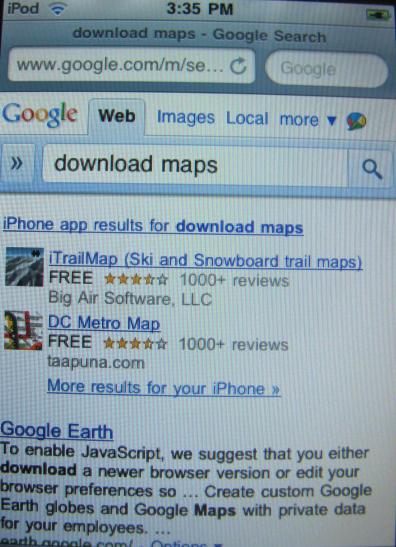 Google increases competition
The Google blog post claimed they are making it easier to find information about which apps to download, but they are actually making it harder for developers to market their apps on a fair and level playing field.  Currently on an iPhone there are upto 5 iPhone applications listed on each page compared to Google.com only offering 1-2 apps, that is a massive increase in competition to be #1 in the mobile apps results as shown in the screenshot above.
Niche Google search queries
The other current problem is that how the algorithm understands your search intention is fairly limited to phrases that include “download” or “app”.  This very narrow band of search phrases is hardly likely to change how the world finds apps but Google would hope it slows the move away from Google.com to external stores like iTunes. The iPhone app store features a very useful search as you type feature that allows you to find your iPhone app via keywords, categories or app name compared to the limited Google.com search results.
Google mobile apps results fail
The secondary problem is that the search results seem to ignore once an app gets over 1,000 reviews which is not particularly hard these days with the millions of iPhone and iPod Touch users downloading and reviewing apps.  It is likely that Google is using reviews as a ranking signal, but if you check what is the top app for “maps” or “download maps” on iTunes these maps don’t feature within the top 20 results, so how Google search decided on these 2 map apps is a mystery.  To demonstrate this failure is inconsistent iTunes has a “news” category, but this time “Fluent News Reader” with 1,113 reviews was the top free app but “GameCenter Games” is not featured in the top 25 results. 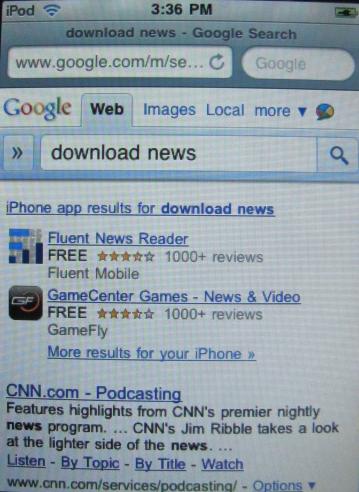 Google mobile apps ignores user location
Why make the effort to enable your location when conducting the search as the results shown earlier in this post are for a search query to “download maps”, run from a New York City location.  The results offer ski and snowboard maps and a DC Metro Map both of which don’t seem relevant to my location or search intention.  A map of Australia might have been more relevant as that is where my iTunes account is registered….
The above image for “download news” also fairs to identify that i’m conducting
Google crushes other app stores
As the blog post said they have plans for other devices in the future which make slow the progress other platforms such as Nokia Ovi, Samsung Apps or Blackberry App World have made in establishing their own mobile apps stores. While the technically cool part is that the the search results are tailored to your device so Android and iPhone users see their relevant apps which does allow for multiple platforms.  The problem is you can’t how the search results differ between each device which makes the results a little less transparent for developers.
Google.com.au also works
The blog post says that its only currently available for Google.com but ive tested it on my iPod Touch on Google.com.au and found it works fine, but images below do show it was generated on Google.com the same results are shown for Google.com.au. It is not clear if part of the new interface means that there is less control over

Google mobile app search not logical
It would make sense to have the mobile apps show for locational based queries such as “restaurants”, but it would likely be something that would be tailored more towards sponsored links where you can click to download Yelp, Urbanspoon or NYTimes Scoop direct to your mobile device. If I did a search for restaurants and was offered a link to download relevant mobile apps to make my search quicker and easier I would see that as a better match that having to change my search patterns to include “download restaurants” or “restaurants apps”, otherwise I would just goto iTunes…. 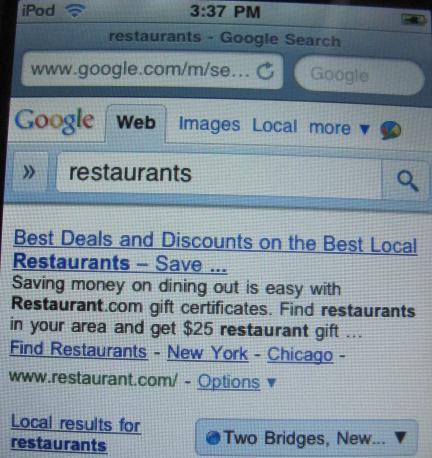 I would be interested to see if you have had a chance to test the new Google mobile search for apps and if you found anything interesting that wasn’t covered in this post or maybe more useful that should be made public about how it can help developers or consumers get more from mobile apps. But its something that is likely going to complicate the marketing for apps developers and only leave Google with a bigger control of your mobile search.

One Reply to “Mobile apps in Search”