If Puma was interested in getting this campaign viral, they should be using some of their social media assets. When I visited the location a few days ago they had hundreds of tourists taking photos but there was no real information as to what the event was about.

Puma City NYC is a month long World Cup celebration focused around Football by day and parties by night, the event is being held down at the Pier 17, South Street Seaport in New York City.  The Puma City event runs from the 11th June until 11th July with a number of sponsors such as Time Out NY running events.  The first official event is run by TimeOut Tony’s Party with tickets only $25 for the 3 hour DJ event. The most interesting point I noticed is that there is actually very little information about the event available, and typically based on past events it will only start to be known until after the event ends or in the photos friends post on Facebook the day after.
Media doesn’t care for PR anymore
Once again a significant amount of money has been spent setting up the Puma City event in New York City, but it seems that the marketing behind the event is asleep at the wheel and relying on slightly useful PR releases to get Newspapers and Media to do the hard work for them.  Puma is a strong brand and should be taking more proactive measures to both promote itself as a brand and don’t trust that traditional media will actually care unless you are buying advertising or advertorial.
Early images of the setup of Puma City New York 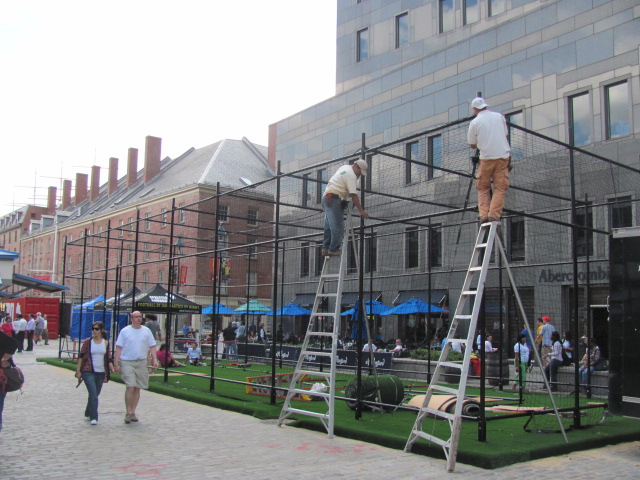 Picture(1) Workers completing the net around the miniature soccer pitch where competitions are likely to be held over the month long Puma City NY event. 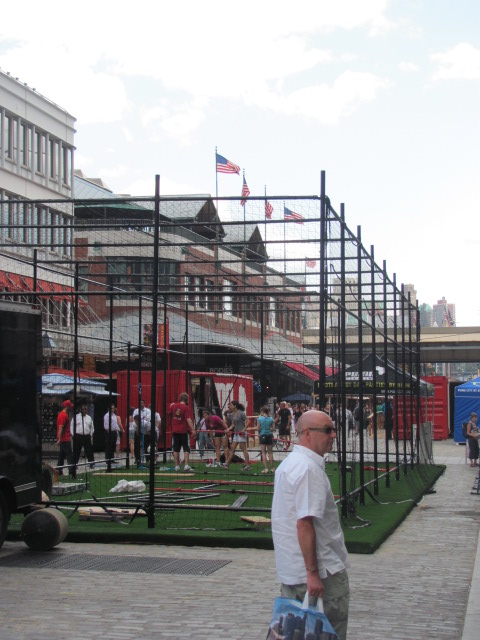 Picture(2) Staff completing the internal goals on the miniature soccer pitch where competitions are likely to be held over the month long Puma City NY event. They are all wearing Puma gear (socks,shoes) 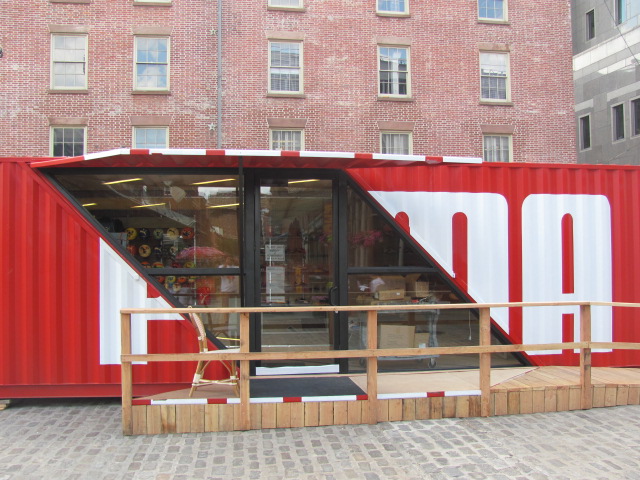 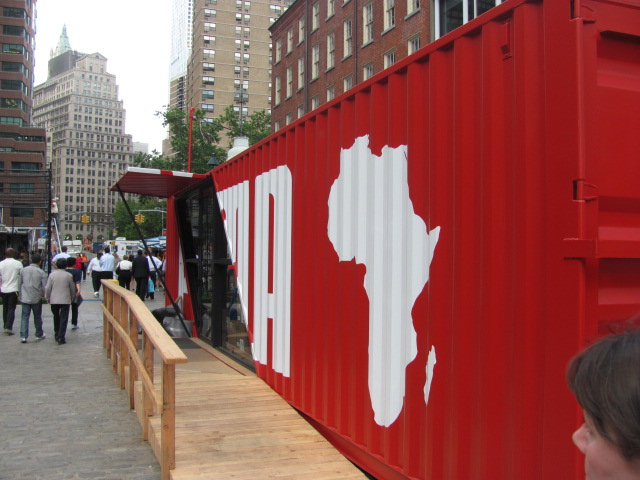 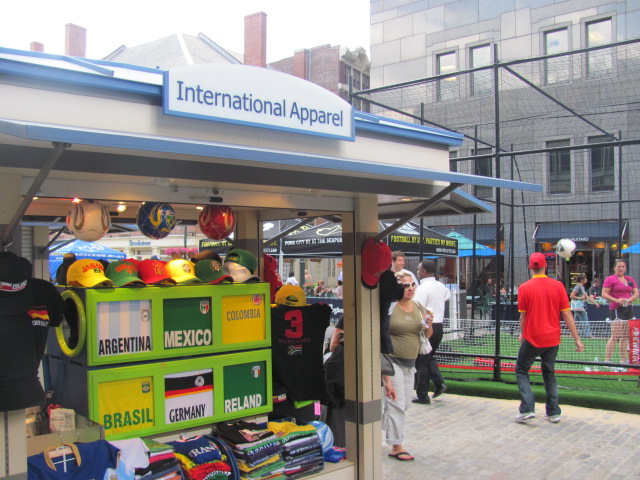 Picture(5) Its not clear if this is part of the Puma City event or just guerrilla marketing by a local sports store, but the timing and location seem to convenient…
Puma City Background
The background behind the Puma City Store is that it is built around a container ship modular system by LOT-EK where 24 containers are able to be joined to create a 3 storey store with retail areas, bar/lounge and 2 viewing decks.  The portable Puma Store makes use of discarded shipping containers as building blocks for its prefabricated buildings.

Originally Puma City was built for the Volvo Ocean Race in 2008, but it has be redesigned for Puma City New York by its original architects LOT-EK, one of the original architects of prefab modular units.It is interesting that on the architect LOT-EK‘s own website in the events section, they don’t feature any news about the Puma City NY event. This is a shame as they designed the store structures, they should be getting more exposure for their prefab structures.

The builders who helped LOT-EK with the Puma City NY project are SG Blocks.  SB Blocks fits in with LOT-EK as their focus is around retrofitting the shipping containers that match to LOT-EK’s design specs for the project and enabling Puma to have the coolest retail store in the world. The specifications on the shipping containers are impressive as they fire, hurricane and earthquake-resistant containers and make for perfect for construction materials anywhere in the world.
Puma Facebook Failure
The interesting point is that the official Facebook page for PumaCity doesn’t actually have any forthcoming events. There has been no activity on their Facebook page since 20th May 2009, but again there are still 4,229 fans who could be engaged about the Puma City NY event. This appears to be bit of a failure by a company once again to use existing assets to promote more than one event, as Facebook pages are not designed for set and forget unlike many brands seem to believe.
Even the official Puma page with 1,638,489 fans makes no mention of the upcoming Puma City NY event, which is a massive audience that is engaged with your brand but may miss out.  This is a once again a lost opportunity as Puma or its agency is paying thousands of dollars in sending out PR releases but not taking full advantage of its massive existing audience. Is it the case that Puma doesn’t want its existing audience to know about the event
If Puma was interested in getting this campaign viral, they should be using some of their social media assets.  When I visited the location a few days ago they had hundreds of tourists taking photos but there was no real information as to what the event was about.
Puma needs Facebook Ads
It’s not too late to start promotions via Facebook Ads targeting people. I would run several campaigns as you want to drive interest in PumaCity as an event to visit while in NY.  As Puma is a global brand another slightly larger campaign for those who might not visit PumaCity NY but might be interested in being associated with Puma because of this event. The other part of the Puma Facebook campaign would be to run sponsored events to ensure that each nights party event is a sell out and PumaCity sponsors such as TimeOut NY get plenty of exposure.
Suggested Puma Facebook Campaign
How I would suggest their could run the PumaCity Facebook Campaign. There is the obvious split between engaging with those who like your brand Puma but also a great opportunity to reach out to those who like Adidas/Reebok/Nike but love Football. The campaign would be split with a focus and larger budget for those who live in New York City (estimated audience 6,341,240). These may visit New York sometime in the next month and will hopefully supported by a secondary for those who live in New York state (estimated audience 7,408,920) and may not travel to New York, Seaport much unless there is something worthwhile.
The next would be those who like or have an interest in soccer, football or world cup 2010, which is a estimated audience of around 5,257.260 people just in the USA.
Avoid the potential failure
The potential for this event is amazing but it seems that its almost like an invite only event that is at risk of being a white elephant unless some money is spent on promoting it better via Facebook, Twitter and even Google Google AdWords. This is a lost opportunity to start to spread interest about the event before its actually started, this event seems slightly similar to how the Corona Beach Party failed to generate much buzz for the brand or the event. The only real difference is that this event runs for 1 month and hasn’t yet started so it might not yet fail, so check out Puma City NY events before they get popular….