If Google is serious about capturing the entire local marketing budgets they need to consider the purchase of Groupon or be left behind with a substandard coupon platform.

Google made a very smart move when it bought YouTube for $1.65 billion back in 2006, while it has taken a while to monetise the platform it offers Google a unique position of complete dominance of online video. The addition of YouTube allowed Google to expand its universal search platform to include video in the results shown below, but Google has expanded the universal results as a platform as a place for self promotion of other Google properties such as Google Maps, Google Places & next Google Coupons?

Google is a marketing company that fully understands the benefit of owning and controlling the platform such as Google Maps or Google Local Places and does likely not want to miss buying Groupon before it get’s too big to be simple cash purchase.  Google must see the potential success of local platforms such as Yelp or location services like FourSquare which they missed out on as painful but it’s unlikely they will miss another opportunity again.  Google has the traffic to rapidly expand the Groupon market globally by careful integration with its Google Places platform, but while it may not be Groupon that Google eventually purchases this article focuses on why it should be considering Groupon. 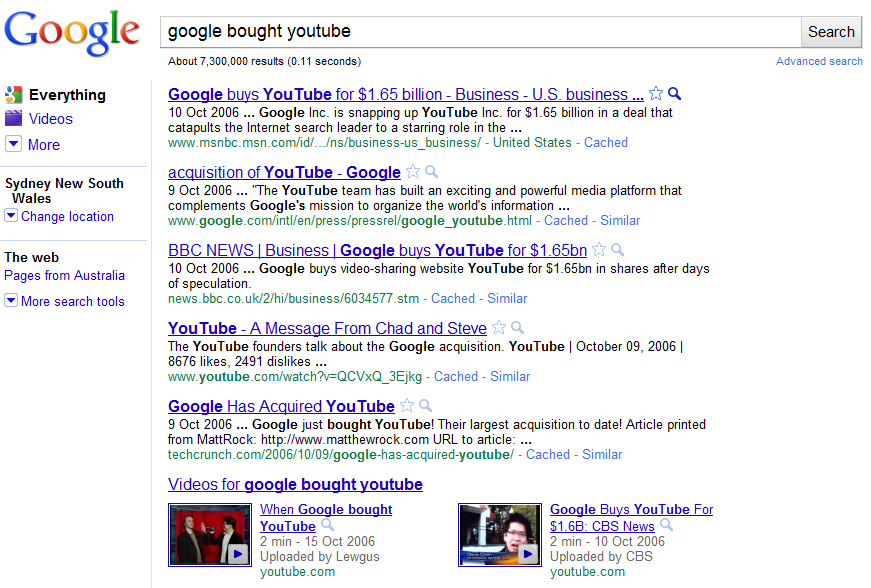 So let’s look at the web interest in coupons within the USA since 2004 and where Google forecasts it to continue, you can see in the screenshot below that with the crash of the economy there has been a strong growth in coupon search traffic on Google. It is interesting to notice that the top 3 terms are: printable coupons, free coupons, online coupons.  The search volume for the keyword coupons just within the USA is over 21,000,000 per month and that doesn’t include the top 3 terms listed above, any specific business coupons or location-based coupons. There is a massive potential audience that Google could easily capture and Groupon has proved that there is revenue in their model so it won’t be the same as YouTube, as the business model is already there it just needs to be scaled.  Currently a lot of what Groupon is doing is manual and with some smart Google engineers and resources that could be easily automated and optimise to further increase profits.

Google is potentially missing another train as they did with Facebook which is getting close to 600,000,000 users and even twitter approaching close to 200,000,000 accounts can they really miss Groupon? According to Compete.com site analytics the monthly growth is around 12.62% month on month over the last 12 months with Groupon.com now ranked in the top 150 websites in the world.  But large amounts of that growth is attained through buying traffic from Google AdWords, so if owned by Google the potential growth and budget would be limitless.

So let’s look at the current Google Places coupon/offers platform which is currently powered by their Google Places product which is so far mostly unchanged since it was launched back in August 2006. The problem is that while the product might have been ahead of its time they failed to capitalise on it and they also limited the platform by restricting it to the US market.  How can the product be taken seriously if it is only available in the US market after 4 years, are they waiting for some developments or do they think people don’t look for offers/discounts outside the US? 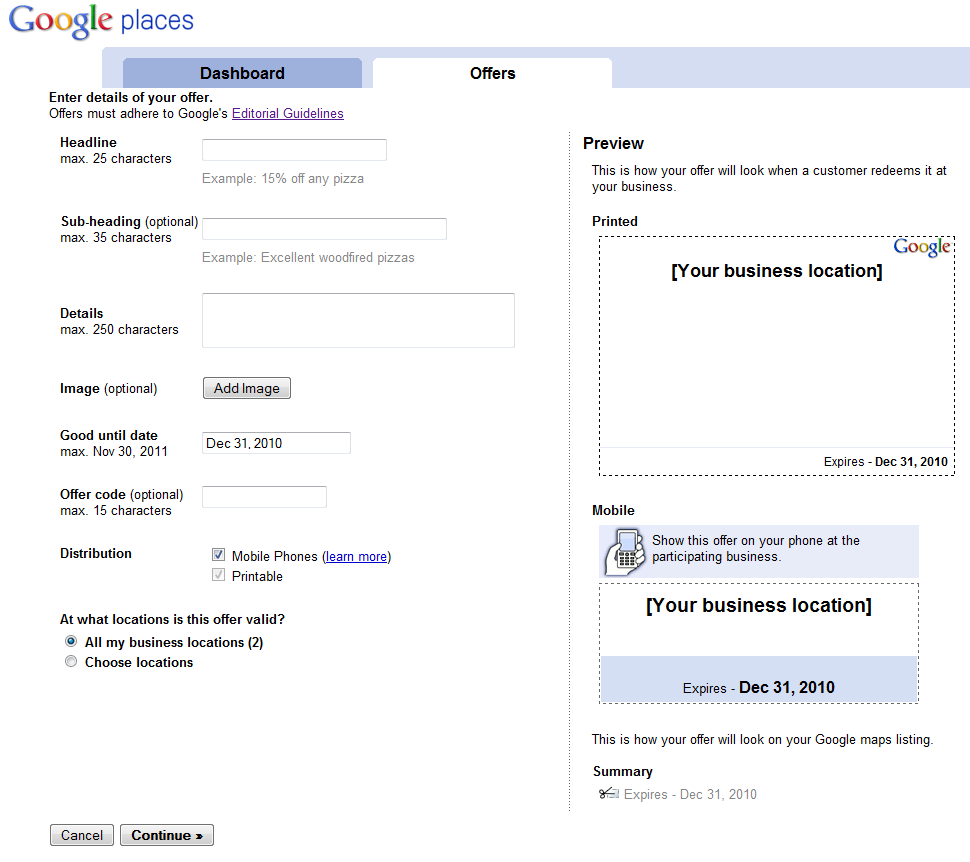 The Google Places offers got a slight boost with Google Tags which allowed business to get a paid promoted listing but their platform still lacks the scalability and usability that competing platforms like Groupon have focused on.  Google has the ability to link the data together from search query to click to coupon to sale and pass all that data back into their Google Places dashboard, which should scare other businesses focused on local or location-based marketing services.It’s actually fairly hard to find a business these days that is actually using Google Places offers which shows that their platform is broken as it is too complicated to use by consumers or business.

You can see below that visual coupon offering with a call to action only 21 seconds left, what is the discount how much you save and what is the discount you get with Groupon, they are very much focused on the what’s in it for me idea.  You can quickly click to share the deal via Twitter, Facebook or Email which expands the potential reach of any offer to your social network which is something that you can’t quickly do with Google Places results. 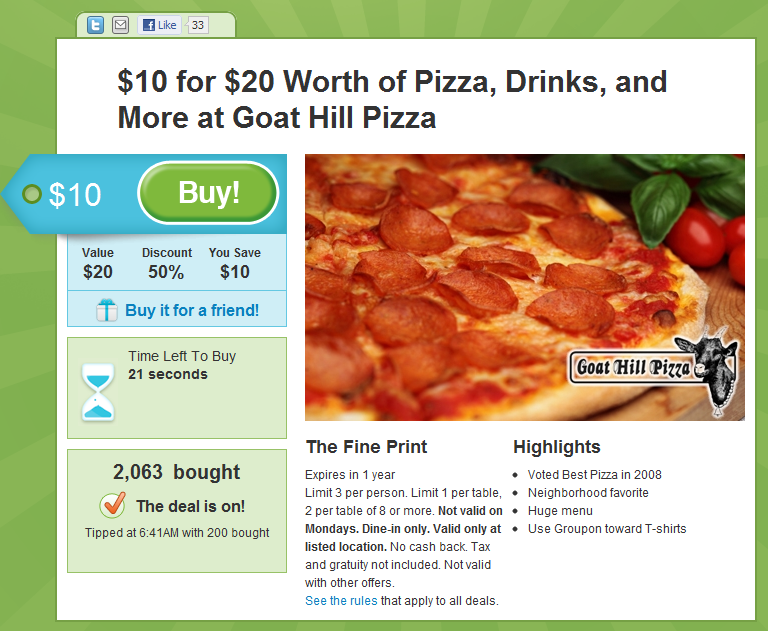 Google needs to consider buying Groupon because it offers it’s platform outside of Google Maps via an iPhone application, not everyone wants or likes to use Google Maps for everything so specific applications are a perfect way to expand the audience. While Google is slowly rolling out mobile platforms they need to follow the footsteps of Groupon who is very aggressive and proactive ensuring their audience can access their discounts where ever they are. Since Facebook Places is offering deals Google Places also needs to improve its offering and Groupon is a great platform.

It’s recent nation promotion which allows a 40% discount on donations to Kiva.org provides great PR and exposure for Groupon but also offers an insight into how their platform can expand beyond physical products into virtual products such as online donations.  It’s easy to see the Groupon platform expanding to cover Travel & Tourism products which currently account for around 40% of Google AdWords revenue which should be a wakeup call of their potential for those considering buying them. 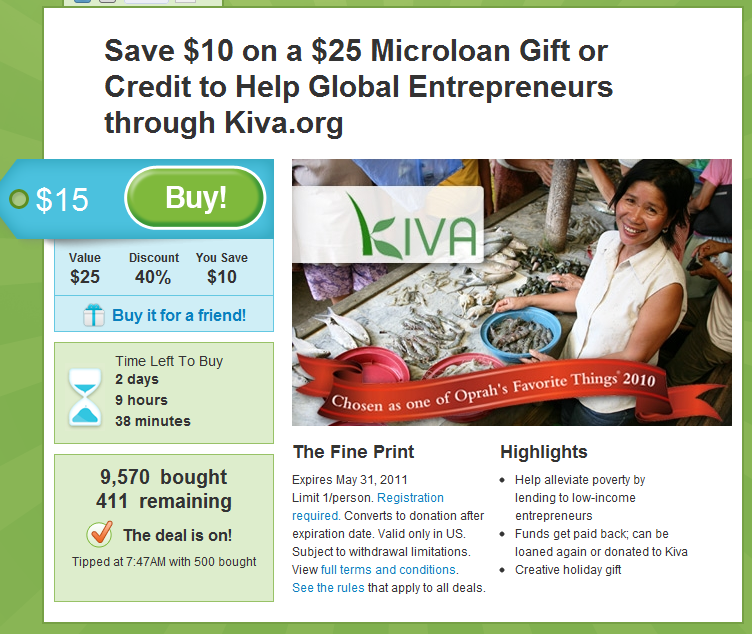 If Google is serious about capturing the entire local marketing budgets they need to consider the purchase of Groupon or be left behind with a substandard coupon platform.  But also for Groupon to succeed they need to continue to purchase international competitors and focus on taking their platform globally, but they do need significant resources to reduce their reliance in buying traffic from Google AdWords and start looking to viral marketing, social media and even better SEO.

One Reply to “Why Google needs to Buy Groupon”