TJ Maxx successfully managed to thrown more fuel on the fire around the rumour that they were going to offer a $100 discount of iPads leading up to the annual US Black Friday sales which start this week by effectively using social media.  According to National Retail Federation last year around 134,000,000 US consumers took advantage of Black Friday for their Christmas shopping.  The Black Friday promotions like the TJ Maxx deal offer consumers often steeply discounted products but online and offline stores compete for the same consumer so will even sell products like the iPad at a loss to get traffic to their stores/sites.  The Black Friday sales are similar to the Australian boxing day sales the key to capturing the consumers dollar is to get early traction or deals spread via email newsletters, Google AdWords campaigns and traditional media. 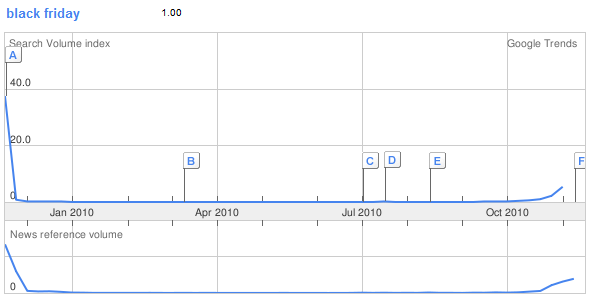 The Google search volume around black friday surged to around 40 times average volume according to Google trends and with the recession it is possible that the interest will be even higher this year based on the spike already seen by TJ Maxx shown below. 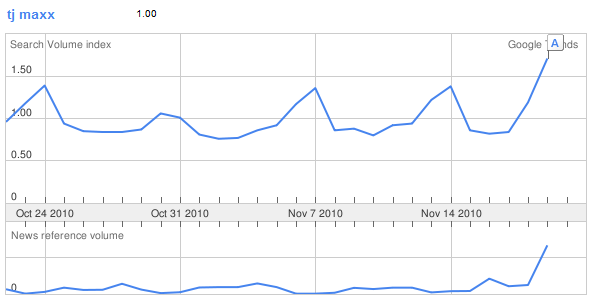 The story broke just after 11am on Thursday the 18th November and received approximately 20 articles published around its iPad promotion which was followed up the next day with around just under 20 more articles from a number of technology and media publications.  In the space of 3 days they had around 63 articles written by websites such as Cnet, Computerworld, PC Magazine, ZDNet, Engagdet and PC World which is worth thousands in terms of free press.  Along side the main stream media sites to cover the story they were featured on at least 17 blogs from Fortune, Baltimore Sun to PC World’s blog and of course this blog showing a fairly successful initial campaign prior to Black Friday.

Above was the confirmation tweet from the official TJ Maxx account that in fact the deal was real but the stores were unadvertised so you would actually have to ring them or go in a visit in person.  This was both a smart online marketing move to encourage consumers to contact or visit their stores in order to get the deal, using online to push offline sales. They also used social media heavily with no advertising to accompany this promotion outside blog and media coverage.

Using TJ Maxx’s Klout data the official tweet had a true reach of around 656 actual twitter users of their 14,132 followers. The first official tweet was retweeted 26 times giving it a further true reach of around 3156 actual twitter users providing a true reach of around 3812 followers on twitter. They also reinforced their message that the reason they were not advertising any of the locations is part of their message you never know what you might find in one of their tweets and in their landing page. TJ Maxx sent out 8 public tweets around the iPad promotion, exposing their promotion to at least 5248 followers on twitter over a 2 day period based on each tweet having a true reach of 656 users. Their initial Engadget story also received 671 retweets, 292 comments and 707 people sharing the story with their friends on Facebook, which also expanded the value of the campaign to TJ Maxx.

From before the story broke and based on the current growth TJ Maxx’s official twitter account received its highest spike in followers in the last 3 months with an estimated 8% jump in followers by the end of the weekend.  This is important as leading up to Black Friday TJ Maxx needs the biggest possible audience to reach if it want’s to successfully compete against stores like Amazon, Walmart & Best Buy.  It is important to measure the impact of the campaign by more than one metric as growing your audience by 8% is both significant and when done with viral promotions like this very cost-effective.

What could TJ Maxx have done better?

The screen shot below showed a very poorly implemented landing page, that could have at least had a product image to reinforce the promotion along with a reminder of the pricing discount. It’s a shame that when companies have promotions like this go viral they are not prepared or able to roll out landing pages quickly the improve conversion rates for campaigns.

While it would have been nice to have a store locator that might have cluttered up the landing page since the product sold out in 1 day it would have made sense to make this stock issue clearer or at least highlighted the SOLD OUT words. For a more effective campaign based on the viral nature of the promotion leading up to Black Friday it would have made sense to include both the link to stay connected with a link to their Twitter account, the button to become a fan of them on Facebook and to make sure you don’t miss out next time a sign-up section for their email newsletter.

If you are still looking to buy an iPad you can always check out Amazon.com which has theApple iPad MB292LL/A Tablet (16GB, Wifi)

So next time you are working in customer service and get an email with an error or problem on your website, take the time to thank the person for reporting it and pass it onto your web developers, don't advise them they are wrong and it's not their job to explain what is wrong and place doubt in the accuracy of their issue they discovered.

One Reply to “TJ Maxx benefits with iPad discount”