Wimbledon final on Sunday. According to Google Insights the regional interest did not show USA as one of the top 10 for visitors searching for more information.  This shows that maybe unless the match is being played in the US the interest is not there or is it more around a failure to successfully promote the televised match times, even with an American in the final.

Twitter – So with the recent passing of Michael Jackson, would this breaking news be popular among the same demographic that drove interest in Michael Jackson to almost 1/3 of all tweets? It appears early that Wimbledon didn’t fare as well on twitter with many of the tweets negative about the length of the game with a peak of 3.07% of all tweets with a very dramatic drop in tweets in the following hour. This shows that many of the traditional users social media are likely not the same that are following Wimbledon.

Google – The issue of search engines providing fresh and relevant content was recently shown to be slow to react to events such as the death of Michael Jackson.  So while this win was not a breaking story, the sheer length of the game meant that an exact time that the scores would be published was unknown even to the players.  This delay meant that for the Google news feed, all news sources had to be continuously scanned around keywords such as “wimbledon”, “federer”, “roddick”.  Wimbledon has had a special custom result which displayed live data from Wimbledon.org which removed the requirement on Google to display the correct live data.

What is interesting is the lack of AdWords being displayed among the results for a high traffic term such as “Wimbledon”, compared to Bing which has both ads at the top and all down the side of the results. 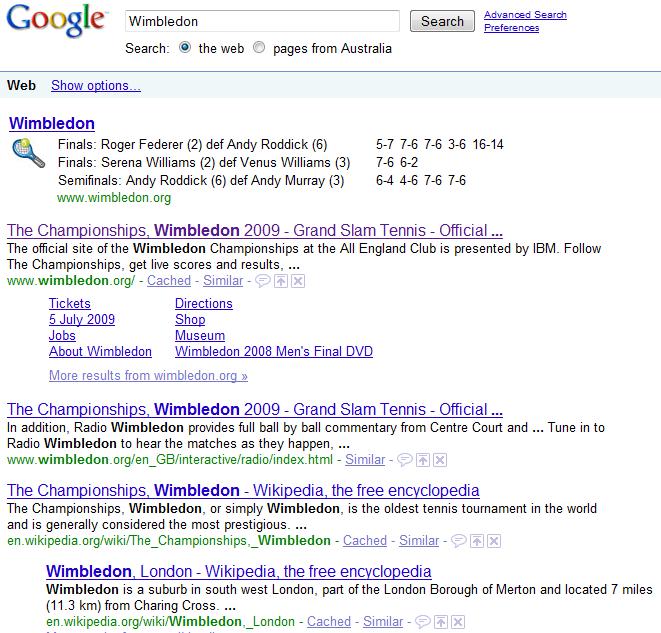 Bing – This was the first test to see how after it was made public that Bing has “news go big” switch to handle events like a Wimbledon win, would it work this time? Bing did quite well without relying on a search widget to correctly guess and display the relevant news results with correct statements about who won and the scores. What is very interesting is the high level of sponsored links that have been displayed compared to the Google result for the same keyword.

The other point is the failure of some of the companies such as “Seatwave.com” to update their ad content from “see andy murray win Wimbledon”.

The gambling websites were not as outdated but “BetRescure.com”, “Online-Betting-Uk.com & “WilliamHill.com” were still all offering deals for bets to be placed on Wimbledon after the finals finished…. 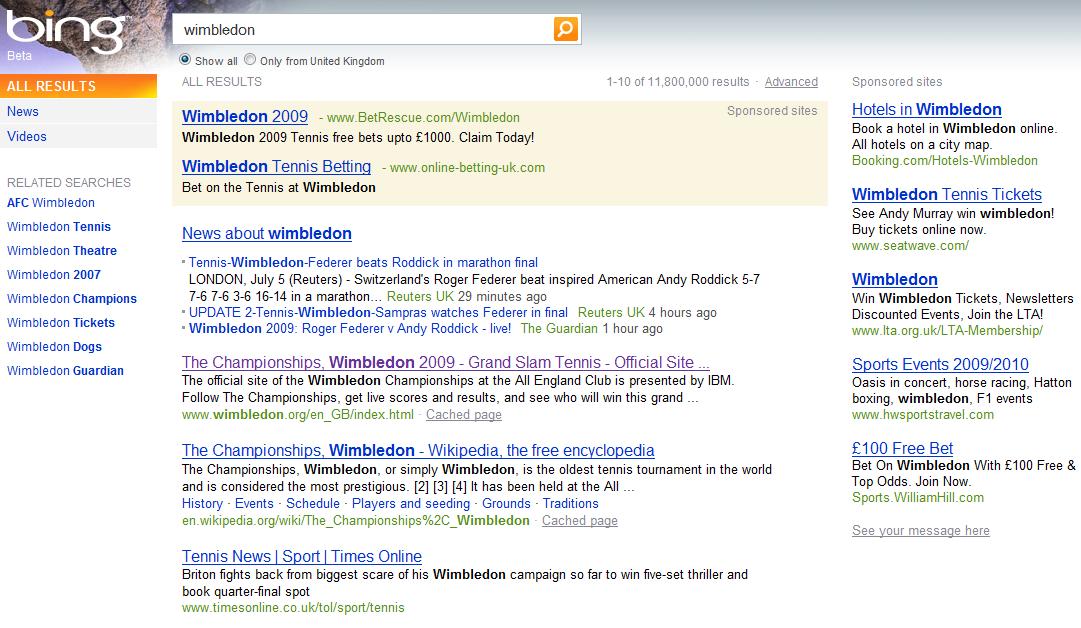 So to wrap this up, Twitter is not the best choice when trying to approach the typically Wimbledon crowd, it is likely that Facebook or Linkedin would be a better option.  If companies are chasing breaking news with paid/sponsored links they need to examine using some more advanced features such as Timed Campaigns and ensure they update their Ad copy to reflect who is actually playing in the finals…

If you want to learn how you can use events like Wimbledon to benefit your site’s search traffic, read my recent post on MarketingMag “Game Set Content Match with Wimbledon“