TMZ.com broke the Jackson story and doesnt even have much to show for it besides a one off 33% jump in visitors on the day they broke the news.

Usually when a website breaks internationally news they get a massive combined benefit of, increased brand presence, inbound links and better visibility in the search results for related terms.  What makes the recent passing on Mr Jackson is that TMZ who broke story hours before traditional media organisations does appear to have not got full benefit possible. 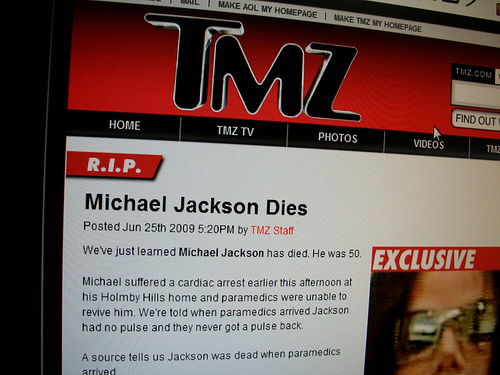 A quick check of how well TMZ.com performs in the rankings after the initial media hype has settled down shows that although they are mentioned in a majority of the results as the source TMZ.com still does not rank well even for terms around the actual event.  A positive note is that the related search results sometimes show “tmz” as a suggested option.

So how did TMZ fail to get true PR benefit from this massive world wide public relation coverage? It may sound a bit paranoid but with almost every media company in the world republishing TMZ’s coverage, they had the potential to get a strong uplift in referal traffic and improved search rankings in Google. I start to feel that traditional media is slowly understanding more about how Google works and they understand that if they had of linked back to TMZ.com based on a very basic concept of link building, TMZ.com would potentially be the most influential media website in the world at least around Michael Jackson news.

So can traditional media companies continue to complain about bloggers stealing content and not linking or refering to a source if they are doing it?

Social Media is the other area where TMZ failed to take advantage with this breaking news, with Twitter traffic around Mr Jackson accounting for around 29% of all tweets at one point.  TMZ still is well behind most celebrity Twitter accounts even with its 3 combined accounts not even accounting for 100,000 followers.

For a once in a lifetime event for celebrity news such as the passing of Mr Jackson, TMZ.com broke the story and doesn’t even have much to show for it besides a one off 33% jump in visitors on the day they broke the news. It is too early to see if their traffic will stay higher, as according to Compete.com most of the traffic is around TMZ and over the last 3 months only 1% of the search traffic is for “michael jackson”.  Hitwise did track a 5 fold increase in visitors from the day before but still only 18% above when TMZ published photos of a bruised Rihanna.

**Update – According to Search Engine Journal TMZ initially recieved 12,000 inbound links, but this has increased to around 27,000, so why hasnt their rankings improved so much?