Ok so with all this hype recently around the new iPhone 3G S, is this going to be the final piece in the global aspirations for Apple to control the world? While this may sound like a crazy concept for a company to have global aspirations when they dont control a majority of the world’s largest distribution platforms.  They do not control the following 5 sources of possible distribution:

So the question is how does a company who obviously has a very sticky product iTunes and an amazingly successful range of iPods, iPhones & iTouch devices grow its market further? Ok so they have the mobile apps market sewn up with over 1 Billion Apps downloaded directly from iTunes Store, well over 6 billion songs, and 200 million TV shows sold.  But how do they expand this market outside their iTunes audience and reach the hidden audience who may not have a mobile device such as an iPhone or iPod?

One smart move to play catch in the social media would be to launch an official iTunes Facebook fan page, which Apple recently did with currently over 1.5 million fans.  The have moved quickly to offer something back not just random posts about how good the company is as other Fan pages seem to do…

So ok that’s social media covered but who would be a good choice for an online music partner that would not be likely to directly compete with their business model? Amazon launched the first punch against iTunes with DRM-Free music so is not an ideal partner, why not pick the world’s #3 website and the worlds largest video website. While Youtube made headlines for failure to control online music piracy when Viacom filed a $1billion lawsuit against the website, this piracy issue would indicate the potential size of the market for official music sales. 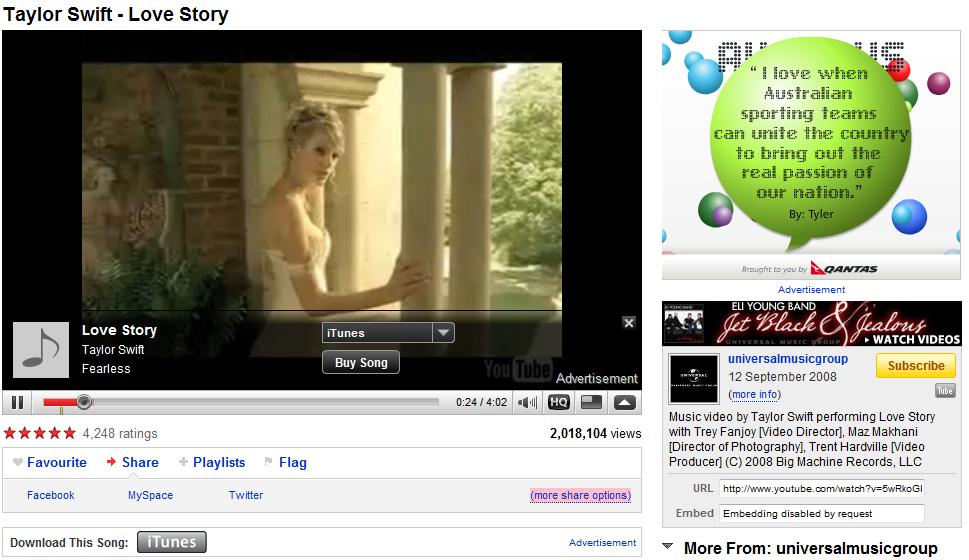 While I must admit this discovery was made on a recent trip to Youtube, because I had the song stuck in my head and its a great song. I did a quick search for “Love Song” and the official Universal Music Group link was listed.  While this shows that Youtube seems to be getting better at controlling copyright content what made it interesting was the advertisement to download a song shown just below the links to share the song on Facebook, Myspace & Twitter.  So I can easily share the official Universal track quickly and easily on my Facebook page, show my fan support on Myspace or Tweet it out to friends legally?

It does appear that based just on these simple “Share” options among the internet’s 3 leading social network platforms that there goes one of the biggest reasons behind piracy it is easier to share when its free.  So Universal has just killed the incentive to download a poor quality version if you wanted to share it online.

The other interesting point about this video is that the advertisement is not trying to sell keyword related Google ads such as “Flowers for a Lover” or “Story Bridge Climbs” but infact the ability to buy the song from iTunes.  This very targeted ad and has the benefit that someone listening to the song would be also interested possibly buying a copy.  The advertisement is a double benefit for Universal as they share revenue from the video play with Google and they also get a royalty from iTunes each time it is sold.

One Reply to “Universal Music Gets Online iTunes Sponsored YouTube”