Come on guys Father's Day in your target market of USA was last weekend, why are you still running campaigns?

Sorry to say for those who live in Argentina, Canada, United States, United Kingdom, Chile, France, Japan or the Netherlands, but your Father’s day was last weekend the 20th June. The reason for the confusion is that some advertisers may not have noticed or are trying to wring every last drop of value of the event.  It is fairly common to see campaigns that run past their due date over long holidays such as Christmas but it is not acceptable for business to continue to be so lazy.

Some advertisers or marketers may argue that there is a spill over after big events and they can capture this traffic now much cheaper because there is no competition.  While this is a fair argument for events like Mayday Sales, Black Friday or Boxing Day sales, you can see from the Google search trends data below that it’s almost zero.  So paying to expose your brand to zero search traffic usually means zero sales but if you have statistics please tell me I’m wrong!

I have updated the campaign tracking code to remind whoever is looking at the Google Analytics data that it’s no longer Father’s Day so feel free to click the image below to ensure there is enough traffic captured in the analytics reports. The new campaign they will be tracking from this page is “Not Fathers Day” which should set off some alarm bells if anyone is running their campaigns and actually checking the data.

While its wonderful to see a company like Bonobos running Facebook ads and also using Google Analytics campaign tagging on the URLs the issue is why wasn’t the extra step taken to ensure the campaign would stop running on Monday the 21st June? It can happen that not all the campaign budget is spent so agencies continue the campaign at the request of the client or on their on behalf but if they took just 30 seconds to add in a new creative I wouldn’t be writing this blog post.

Just a note that this is not specific to Bonobos or Facebook, a simple search on Google for “Father’s Day” showed a number of ads for campaigns targeting the event.  It is possible that some of these domains might be still running on Google Grant money but they still should be ensuring they are getting value for their clicks and donations for their organisations.  It would be smarter to run a new campaign “Forget Father’s Day?” you can still make it up to him with a donation! 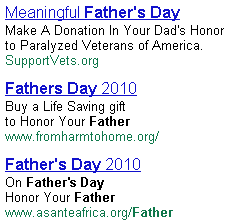 Disclosure: Facebook and Google offer a feature to stop campaigns on a certain date as shown below

So this is a reminder that it’s not really that hard to set up a campaign to run leading up to a specific event or day, but its even easier to stop that running once the day has passed and you won’t waste your money communicating to your audience that you are out of touch and don’t know what day of the week it is….