Consumers don't always want change especially when its forced on them for the benefit of marketing departments and not making the brand part of their lives.....

It seems that once again marketing has managed to get the upper hand over common sense, with a company menu announcing that staff will no longer be allowed to refer to Chevrolet as Chevy when speaking with family, friends or customers.  There are two problems with this heavy handed approach, first the memo should have not been made public as it makes it less credible and the second is forcing consumers/customers to use correct terminology is not always the best way to rebuild a brand. Consumers don’t always welcome change especially when its forced on them for the benefit of marketing and not making the brand part of their lives as Chevy was…

Some other branding examples where a brand has accepted its use in time and not tried to kill a brand like Chevy:

Analysis: The actual volume for the term “Google” is around 8000% higher but it skews the graph and doesn’t allow you to see the use of the term “Googled” has found a place in consumers hearts as the preferred alternative to “Googling” over the last 6 years. It would be a bad branding decision for Google to select “Googling” as its preferred branded verb as consumers have shown they are increasingly preferring to use the alternative “Googled”.

Coke vs Coca-Cola vs Coca Cola

Analysis: The correct branded term “Coca-Cola” when measured against the variation of “Coca Cola” or the abbreviated “Coke” show that consumers don’t typically use the exact product/brand name.  The chart shows a massive 911% difference in web interest using the “Coca Cola” phrase and even the use of “Coke” seems to be starting to match the product phrase.  So the point would be that if Coke were to be disallowed from marketing, it is likely that a majority of consumers would not switch to using the correct “Coca-Cola” phrase when referring to their beverage product.

The top markets that are suitable for marketing only with “Cola Cola” are Mexico, Brazil, Spain & Germany.  The US, Canada and UK consumers seem to prefer the abbreviated version “Coke”. So if Coke was to make just a change in english speaking countries it would likely affect branding and interest in the brand.

Analysis: The interesting point to note is that until mid 2006, the term wasn’t often used online but is increasingly common in company advertising and is often used by Australian consumers in casual conversation with friends and family. The screenshot above shows that even Google understands Maccas is the same as McDonald’s in Australia, but notice the 2nd result is actually referring to Macca’s breakfast as a product the company offers consumers.  This shows a company has accepted local colloquial names and integrated them into marketing, encouraging Australian consumers to accept the US fast food chain as has Google.

Analysis: The Australian Burger King franchise is often referred to as “Jacker’s or “HJs” by consumers and you can see from the screenshot above that Google understands consumers intentions when searching for fast food restaurants, and they don’t try to correct consumers with their “did you mean” search assist.

Analysis: A majority of the US states have a stronger preference for the term “Chevy” but a few states stand out as they have a massive preference towards “Chevy”. The few states below are ranked top down by from strongest preference for “Chevy”.

Analysis: According to AdAge’s article on the issue, the reason for the change is for their global brands, but there is a clear movement worldwide that is showing preference for Chevrolet, so what the sudden need for the change, which will impact mostly on their US Chevy supporters.  This is a perfect time for the old “if it ain’t broke don’t fix it” principal to be applied by GM to the Chevrolet brand. 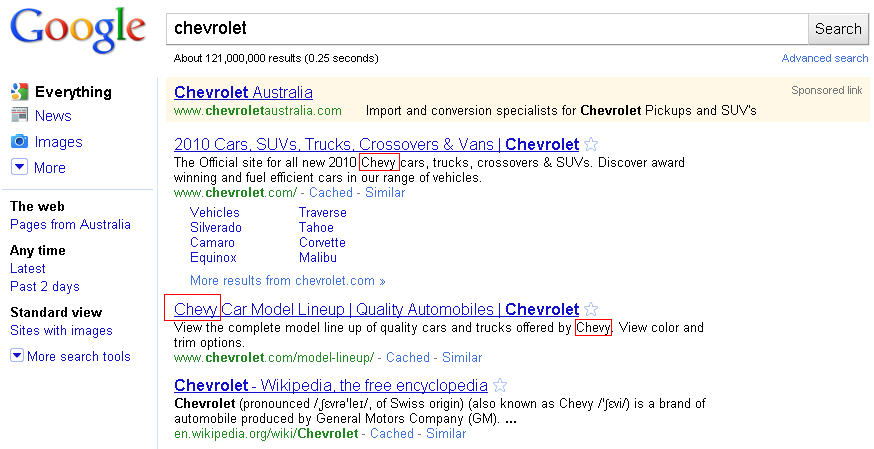 Analysis: You can see clearly that GM is still referring to their products on the company sites as Chevy marked with the red boxes on the search results above.  This practice seems to contradict the memo asking for staff to stop using the short term when they are still clearly advertising it to consumers.  It would be easier for GM to start with properties it controls such as their corporate website and then expand offline via dealer networks, but I see it as going up a creek without a paddle. The other side issue not shown here is a number of car enthusiast groups are more commonly named “Chevy….” and typically its easier for consumers to spell than Chevrolet. 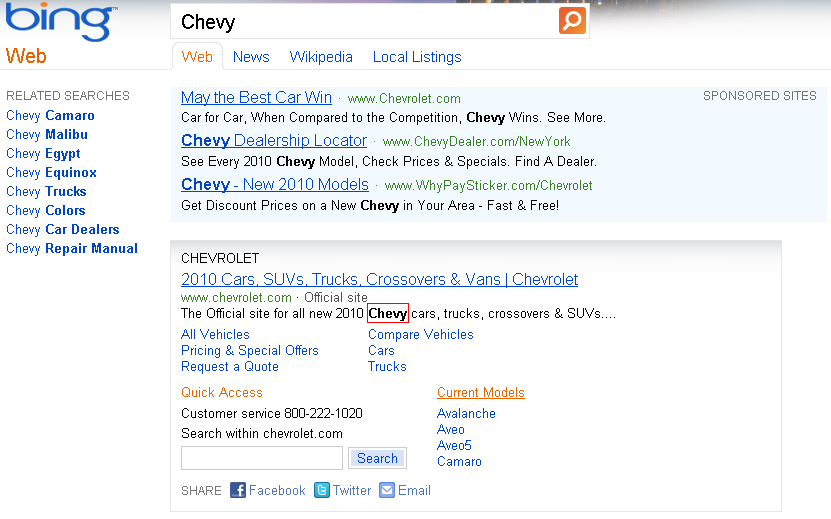 Analysis:  On Bing once again the official Chevrolet site is the place for all new 2010 CHEVY cars…. so this shows that they are not really serious and it might just be a publicity stunt to get consumers and media promoting the importance of the Chevy brand.  Can it really just be a viral marketing stunt?

10 Replies to “GM fails with Chevy”