Friday the 13th failure! Some members have been advised of an upgrade that they are ineligible for...

Everyone loves a free lunch so on at 5:01pm on a Friday afternoon it was great to receive a personalised thank you email from VirginBlue’s Velocity Membership program.
Virgin is known for smart and effective marketing campaigns so this did not appear to be too much of a stretch to be true. The email promised a free upgrade to “gold” membership for one year FREE! 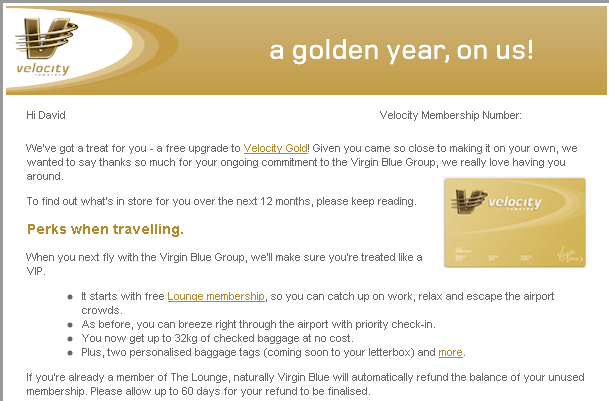 Checking all the details, the membership number was correct as was my details and the email address it was sent too.  I have been travelling a bit more lately so it appeared possible that it might be real.
While the email seemed almost too good to be true, clicking on the link too me too the correct website pages and everything seemed legit.  It wasn’t until I watch a tweet from BenGrubb which I later discovered was correct.  His quick post on the issue outlined that VirginBlue had blamed an IT error for the gold upgrade.

Watching some of the initial reactions from Twitter before and after they sent the apology email did not seem to quell the dissatisfaction felt by the Velocity member’s who received the email. Some of the reactions were understanding but many brought up issues of anger and dissatisfaction with Virgin’s response to the issue.  Some of the later tweets discussed the issue of members being spammed as they have previously un-subscribed from Velocity email marketing lists.
@jameswilliams90 – @virginblue take personal responsibility and stop blaming the date Fri 13th for your bulk email gold upgrade debacle! #fail
@dannyrod – #virginblue are terrible, sent me a gold status for my velocity rewards and then withdrew it! I was so excited to fly them again but no haha
@zoomzoom83 – I don’t envy #virginblue tech support right now. Or the guy that fucked the email up.
@TheAviator1992 – @VirginBlue That was a really nasty trick…
@silverstackers – @VirginBlue – #oops? I want my Gold status!
@raejada – Friday 13th sucks! I would have been able to use that upgrade this year 🙁 So…what scale of a mistake is it exactly??? #virginblue
@le_sloth – damnit I thought it was too good to be true getting my #virginblue gold upgrade
@yarrcat – @VirginBlue offers me gold membership, then withdraws it. http://bit.ly/3B0X9s http://bit.ly/4DIubi  Not the only one. Friday night #fail
@jamesmcc – @DamianEdwards @jodiem I got the same email from @VirginBlue I was quite excited and said wow thats great customer service, guess not
@yarrcat – @Tuna Dang, seems like a lot of people got the @virginblue rug pulled out from under them. Sigh.
@johnsee – Dear @virginblue. Thanks for getting my hopes up for nothing…
@sportsthought – @VirginBlue wtf? Tell us we have upgrades then send lame email apology! – that’s poor customer service
@shimmmergirl – I doubt @VirginBlue email was a mistake…was it just a way to promote the ‘gold status? If so, acute social media mistake!
@RugbyRiddler – Getting rolled by both Qantas and VirginBlue on the same day – marvellous!
@shimmmergirl – think @VirginBlue may have class action on its hands sending out ‘gold status’ upgrade emails, then calling it Fri 13 mistake. Dodgy!
@lukasmarshall – Seriously uncool @VirginBlue. Seriously uncool. How many people got the email? Would it really be that much of a stretch to honor it?
@CarFullOfBogans – @VirginBlue you pieces of shit. You sent this out pricks
@I_enigma – RT @jodiem: So it looks like Virgin Blue may have breached the spam act also by sending to people who opted out already. #virginblue
@reebostyler – @VirginBlue worst mistake ever! I was about to purchase confirmed seats due to the (not so) awesome email!
@stormgc – @VirginBlue Come on guys I want my free Gold upgrade!
@nic_leah – seems like @virginblue had a huge email stuff up today. disappointed gold for a year sounded awesome
@CodeJedi
just got the retraction email from @VirginBlue… no longer Gold… that was short…think I’ll stick with Qantas…
@maungle
Hey #virginblue – you can’t take away the gold upgrade you just gave me! Not fair!
@DanielMK
@Dannyrod mate, I’m starting a #virginblue boycott. From now on it’s #tigerairways for me!!!
Most of these tweets appear to get progressively worse for the brand and the PR for the company, so what is the companies initial response?

VirginBlue Response
So its often important to see how quickly a company responds, with Virgin they managed to send out a followup email 3 hours after the initial mistake.  While this is a short term solution based on the tweets many of their Velocity members do not feel it is satisfactory for such a failure.
The initial members that flooded the website causing it to crash and also the customer service phone calls did not see this update unless they visited the website some time after they received the initial email. 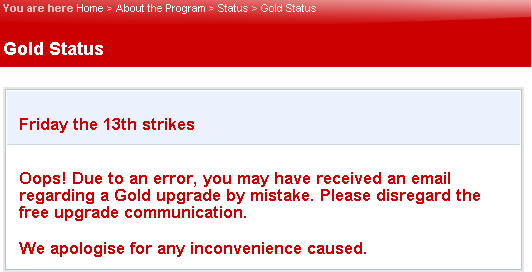 The delay in sending out a followup email of up to 3 hours does not show a full understanding of the greater issue and the importance of a quick response.  It would have not been a massive issue for VirginBlue to offer to honor the deal or at least offer a discount off a future VirginBlue flights.

The official tweet from the VirginBlue account did not seem to go beyond a general generic response.  Using social media platforms such as twitter allow one-to-one communication but they failed to do this….
@VirginBlue
Friday the 13th strikes! Some members have been advised of an upgrade that they are ineligible for. We regret any inconvenience caused.
Failure learnings?
So what can be learned from this situation, first point is that if you stuff up, monitor the social media traffic to see what the key issue is and what are the angry/outspoken members looking for as a possible resolution.  In this case there appeared to be a consistent feeling that honoring the deal would have resolved the situation and been a great PR exercise for the Velocity program.
Did the initial offer match the velocity program? Yes, to make the issue more of a sore spot, read the footer below included on the email sent to members. So it is a fair point that people could have believed that the email was realistic, believable and likely to be true….