Today, Google is releasing +1 buttons to the whole web. As a result, you might start seeing +1 appear on sites large and small across the Internet.

It has taken some time but finally Google has rolled out their +1 button for websites, it was leaked early and it hasn’t been a well-kept secret but its already starting to cause concern among both bloggers, webmasters and SEOs on what it all means for them.  The obvious big point for bloggers is that it offers you one extra way that people can show their appreciation for your blog or article by voting it +1 but will it dilute the clicks you previously attracted to your other social buttons?

Webmasters are likely the biggest losers in this game as they are the ones that have to work out how to implement it dynamically quickly but also ensure that it matches with their social media strategy plans and their designers don’t have a breakdown when they see how the button destroy their carefully balanced world.  SEOs are probably the most cautious about the new button and I haven’t heard of many who are happily clicking the +1 button linked to their Google account just yet… it’s going to be a massive trust issue to give their social media graph to Google on a silver platter.

Early Issues with +1 Button
TechCrunch shows how it’s going to be a nightmare for webdevelopers who will have to look at changing their websites to accommodate the extra button but also make sure it plays nice with all the other buttons. The other issue is also trying to get the button centred it seems to have a preference for ignoring the code and choosing to be left justified.  You can see below that until you elect to like that particular page or website you will be presented with a shitty visual experience that because it’s an iFrame you don’t have too much control over at this point. Much of the button chaos was previously solved by ADDTHIS which was an easy way to add in multiple buttons or use a combination or image and buttons but recently it’s fallen out of favour as website narrow down the number of social media services they really care about and choose to focus on just one or two.

WordStream has also highlighted the issues with websites now having to deal with half a dozen buttons which all have different actions, sizes and even purposes.  The confusion of the consumer is likely and it seems early installations of the button is showing issues of the button vanishing even with users are opted into the +1 experiment and logged into their Google account. Early bugs and issues might shake the confidence of the launch partner websites as it seems a number of them have not bothered to roll it out just yet.  They have got some free publicity by promising to roll it out in the near future but also have time to sit back and evaluate how extensively they will roll it out and when that might happen.

The big issue I can see is that the style of the button doesn’t really fit in and it will take a fair bit of good will to get publishers to start promoting it as heavily as they do with Twitter or Facebook.  If you visit HuffingtonPost you are greeted with a popup requesting you should connect with Facebook, I struggle to think how long it will take for publishers to have that same popup saying Why don’t you login via your Google Accounts. The Connect with Facebook platform and message works well with consumers the login via Google Accounts just doesn’t have the same appeal to most users.

Ray of Sunshine from Mashable?

The only ray of sunshine is from Mashable who are very heavily promoting the +1 feature below its Mashable share widget, while the article is possible skewed in asking for a response there are 10 times the number of +1 than there is Facebook likes. The only thing that is not clear is if the placement of the button by Meghan Peters in the middle of the article got a majority of the +1 votes, but Linkedin got 25% more shares than +1 and Twitter got almost 3 times the amount of shares as +1.  So it’s interesting that the Mashable story was more popular to share via Twitter and Linkedin than it was via Facebook or even +1 buttons the article was focus on, but it makes sense as what is the current benefit of +1 is not yet visible.

The article about the +1 button launch over at TechCrunch got a massive number of votes and again around 10 times the number of Facebook likes and had the button in the standard spot with the rest of them, but Twitter didn’t fare as well so maybe the platform is more suited to Technology blogs than the social media types that Mashable attract.

Based on these two articles it’s likely the biggest loser in this social media war might actually be Facebook in the short-term, but I would prefer to allow people to easily share my content with 600,000,000 Facebook users at this stage. The only loser I can see at this point is the number of blogs willing to also include the Facebook “Send” button once they add the Google +1 button, but until Google rolls out some analytics around the impact of the button to match Facebook’s analytics it’s going to be a tough call to make either way.

Following on from Twitters Tweet button there is now the one-click Follow button which does now offer the ability to keep users within your website rather than sending them away to Twitter, it also means that you know need to consider offering two buttons on your website just for Twitter.  The benefit of the Tweet button is that it promotes sharing of content even amongst your existing followers where the follow button just increases your followers who may share your content at some point in time.  It should be fairly easy for twitter to follow Facebook’s lead and use an iFrame and sense if you are an existing follower and then only show you the Tweet button but if you are not following them you get first shown the Follow button. It is a big step beyond using third-party platforms like ShareThis or AddThis but it’s a very much a stop-gap solution but it’s also likely to be used differently in a site such as next to the article authors replacing the previously used @Thelostagency hyperlink.

If you want to add the one-click follow button you can find the resource here but the downside you don’t get any Twitter analytics but you can easily tag up the button with web analytics. I’ve tried to change some of the settings such as the colour background to be used and if it should show the follower count but it really seem to do what it wanted and appeared to alternate between showing and not showing a follower account.

It will be interesting how AddThis and ShareThis integrate the new Google +1 button as it’s a much smarter solution than having to decide which button you are going to keep just in case people want to click it and which button is going to get used by your visitors.  It might be the case that they actually grow their market share as it’s going to be much easier to replace the chaos that see above with a simple widget so don’t discount them just yet.

Facebook has long had the monopoly of Like buttons that have spread across the web but the recent addition of the “Send” button seems almost redundant as when you select to like something you can share it on your wall but the use of the share button works on the expansion of Facebook’s messaging platform.  Instead of just sharing within the Facebook platform you are able to share to an email address which moves beyond Google +1’s limit audience of those logged into their Google account. As not many people yet understand the potential of the button or even how to use it there is a relatively low-level of adoption and even big sites are still struggling to see its benefits over just having the “like” buttons.

Again as with many scripts you try to a widget WordPress.com automatically strips out of the code, it’s moves like this that will slow the adoption of the +1 button across the massive WordPress.com blog network.  It might be in time that WordPress rolls out an official feature you can enable Google buttons on your blog as they did with the Twitter share button.

Update: WordPress has now updated their Twitter widget to allow you to easily enable the Twitter Follow button so it’s again another step ahead of Google & Facebook, only downside is it’s having some teething issues right now so you might just see an error message on the right side of this blog.

The only thing that button does rely on is a trust element as you can specify the URL that is getting the vote so you could take liberty with that and place it elsewhere on any site to gain votes for another site.  It’s likely there are some safeguards in the Javascript but it’s likely going to be a fun week for the early adopters who have a bit of technical understanding around the javascript it uses to power the button.

With the rollout it seems the promised updates to start to show Google Plus One data in your account has not yet materialised so the question is when will this data start to show in your webmaster tools.  Also according to the official blog post +1 buttons are apparently been progressively rolled out across Blogger, Google Product Search and YouTube but nothing has been seen just yet…. 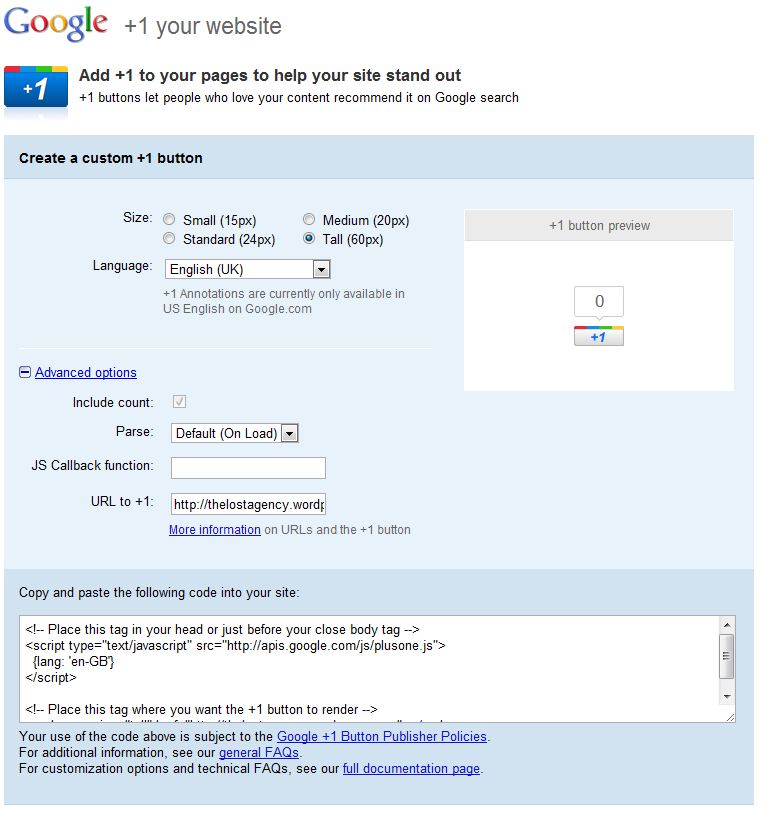 How to add Google Plus One?

I’ve published a quick guide with tips on How to Add Google +1 to your website.

39 Replies to “Google Plus +1 for Websites goes Live”