Linkedin launched one of it’s most successful viral campaigns but it seems that Kred actually started the ball rolling 2 weeks earlier with their Top 1%, Top 5% and Top 10% of influencers on Kred. Linkedin’s marketing campaign was far more successful with people generating Occupy movement parodies about being in the 99% that are not seen as important.

It seems that unlike Linkedin’s annual insights Kred is still announcing new members such as myself who just joined 4 days ago based on the email notification I got tonight. I think from a marketing perspective that this is might bring some game metrics into play to keep your elite status as just like Klout if you don’t tweet or share for a while your Klout score starts to drop.

The email is fairly simple and unlike Linkedin’s message it doesn’t disclose what number of accounts this data is based on but plays to narcissism as it gives you the ability to instantly share the news via Twitter or Facebook. It’s important for the idea to work that people actually do share the news but I’m surprised how many people are actually sharing the news based on a Twitter search. 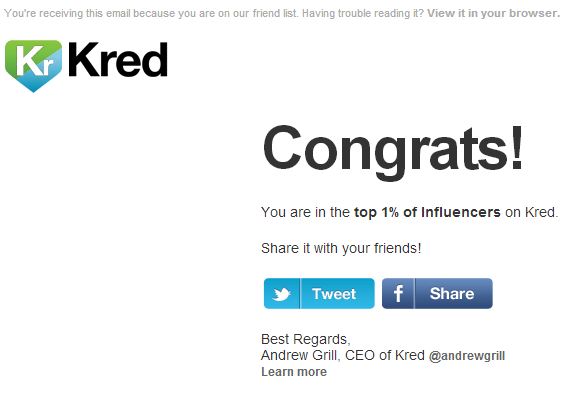 I think they have done a much better effort of ensure the message can be easily spread but some transparency around what is their audience size that I lead as an influencer?

So what does that mean?

Well unlike Linkedin’s simple metrics which was based on the top profiles viewed in 2012, it seems Kred’s metrics are based on a much wider set of social signals.  I’ve included my “Kredentials” below but not sure what is the difference is there between me and the top 5% or top 10% as I don’t think I have an amazing Kred score. It’s also interesting that unlike Linkedin anyone can easily compare other peoples Kredentials to understand how much they need to improve their score. 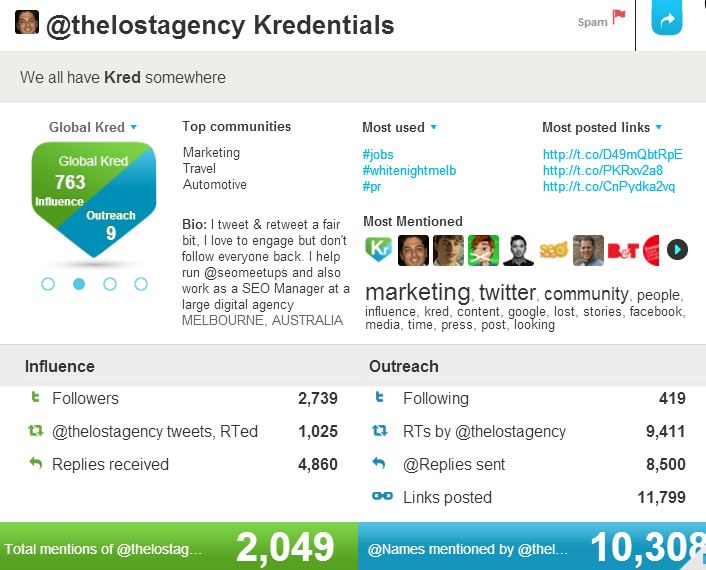 So the question is do you think more platforms will be pushing the eliteness angle to ensure their members do the marketing for them? Which platform is the first to touch on the other side, so you are in the bottom 5% so please lift your game?