Recently YouTube has shown the potential to offer multiple response options for advertisers interactive videos using the overlays linked to other videos.

On of the biggest issues around video has been its been a typically one way medium, while people can comment back by text or video can it be used for viewer feedback.  Recently YouTube has shown the potential to offer multiple response options for advertisers interactive videos using the overlays linked to other videos. While it is not clear if this is a beta test or just a very smart and inventive person who is pushing the boundaries of the YouTube platform.

The video player is built in Adobe Flash so technically anything you can do in a standard flash application can be overlaid on user videos, and this is becoming increasingly common with popular videos.  The multiple choice survey test shown below is running on Machinima.com’s YouTube channel where, they are broadcasting game previews from Comic Con 2009. They are very clear with different choices with individual colours and even a text box at the top of the screen to explain what they want you the viewer to do. 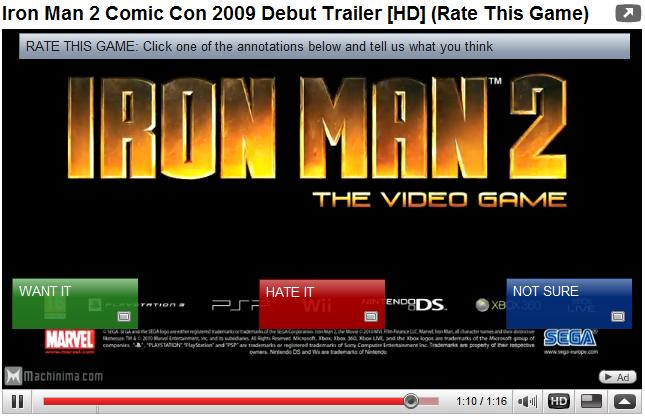 The “rate this game” option is shown towards the end of the game preview.  When one of the options are selected a new YouTube video loads, with a clear title as to which option you selected, but could the video instructions be a bit more clear for the next steps as you can see in the screenshot below.

The reason I feel that the steps are not clear is that around 15-20% of people used the 5 star rating system to provide feedback and not the text comment box below the video. Although the text is explaining the call to action is very large, since this is a visual element, a short video showing the desired action would make sense but only because its YouTube.

If you were running this on different medium/platform such as your website screenshots or flash animation could deliver the same visual explanation as not all users maybe used to using the comment field. 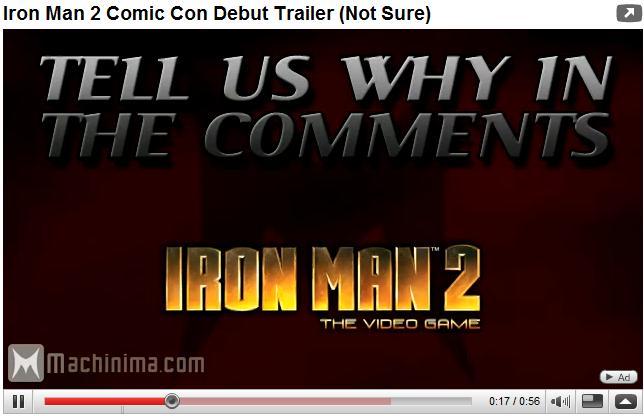 So how do you measure the results, the video requests for comments to be made in the text comment field below, but this also requires the user to have an account and login.  Based on the chart below based on the YouTube comments reaction more people are unsure if they want the game so they must analyze the comments for more understanding.

An easier way to measure survey results is to track which of the three videos options get the most views, the benefit is that the viewer doesn’t have to login to track their response.  From the chart below we can see that around 62% of views of the 3 options were that people want the game which may not be the perfect campaign result but to scale for large campaigns with thousands of comments its more efficient.

Comments can still be useful as they can provide feedback such as the “game lighting is too dark” or the “there appears to be glitches in background images” but the number of comments were a fraction of video viewings.  There is also the issue which is visible of users responding and interacting amongst themselves off the topic and even starting abusive attacks against other users commenting.

There are a few issues, one is that YouTube makes all videos public, so once one option such as “hate it” is selected it is easy to see related videos such as “not sure” and “want it”. If campaigns like this are to be more transparent, it should not be possible that users can select one option and then click to view other options skewing your results.

The obvious issue for analysis based on the chart below is that the number of comments were fairly consistent between each option so do not provide as much feedback compared to the video viewings, the lower the number the higher influence of duplicate posts, and multiple posters, spam… 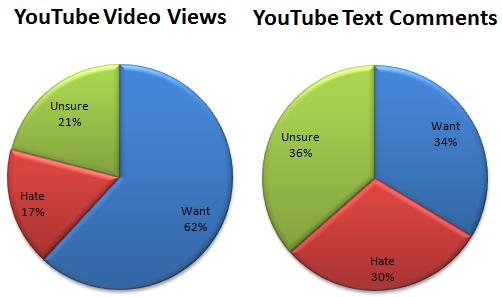 So how can web analytics help this test deliver better results for business?

Using methods such as A/B testing, they can test a different second trailer for the same game, using the same question but with 3 new video response pages.  This way they can test which particular scenes or clips generate the most positive reaction to the game.  This information can be further analysed as why but can be used to make a simple decision as to which would be best in an advertising campaign.

Further tests could be would you buy this game based on this preview, using the same call to action tracking and comparison of data to measure if a second trailer generated higher “want” results but also higher “buy me now” results.