There was a very weak link between offline activities at Times Square, via PR channels and a complete miss on the online activities.

In what could have been a successful ongoing event to add to the excitement for tourist visiting Times Square, New York was actually just a single 24-hour PR event for Corona.  The event was a 24-hour beach party but it should have been part of a longer event as summer is more than just 24 hours and beach holidays should be relaxing not fly in fly out as Corona has tried to market them.

From an online perspective it was a bit of a dismal failure with a larger drop in online interest in the brand after the event, you can see even when adding in News headlines, none of the PR activities around the 24 beach party were picked up by media.  For the amount of money that was spent renting the prime real estate in one of the most expensive locations in the world, more thought should have been put into PR as well as online marketing. According to AdAge the costs to advertise in Times Square can range around $350,000/month for a single outdoor billboard and that was 5 years ago, but according to Wikipedia the signs can be rented from as little as $10,000 per hour if available.

A 2006 NYTimes article on Times Square’s viral benefits for advertisers being that visitors/tourists photograph, blog and watch the YouTube clips but even using the audience figures this campaign still amounts to a failure.  The rental cost would have been around $25000-50,000 for the day at 2006 prices and since it wasn’t a public holiday Corona might have even got a discount for their event, but I’m not sure they got a decent ROI for a haphazard product launch.

Beer, Win & Spirit companies know how to do a headline grabbing launch party, but this event seemed to lack all the PR hype a unique event like this should have attracted.  One of the Youtube clips I found while fairly well produced still didn’t really set the charts on fire with less than 400 views, that shows that the event didn’t attract as much attention and interest as it could have.

There also doesn’t appear to be anything like an official Youtube brand channel, an official twitter feed as Corona Summerbration did last year, it still actually has a few hundred people who are following the account and it would have been smart to update these loyal followers that the new campaign for 2010 is Beach Party.  You have a pre-engaged audience ready and willing to accept advertising/brand promotional messages for Corona summer campaigns.  It’s not like you are now selling Corona T shirts or are cross promoting other beer brands, it’s the same product and its the same seasonal campaign, which makes it a perfect match that was missed. 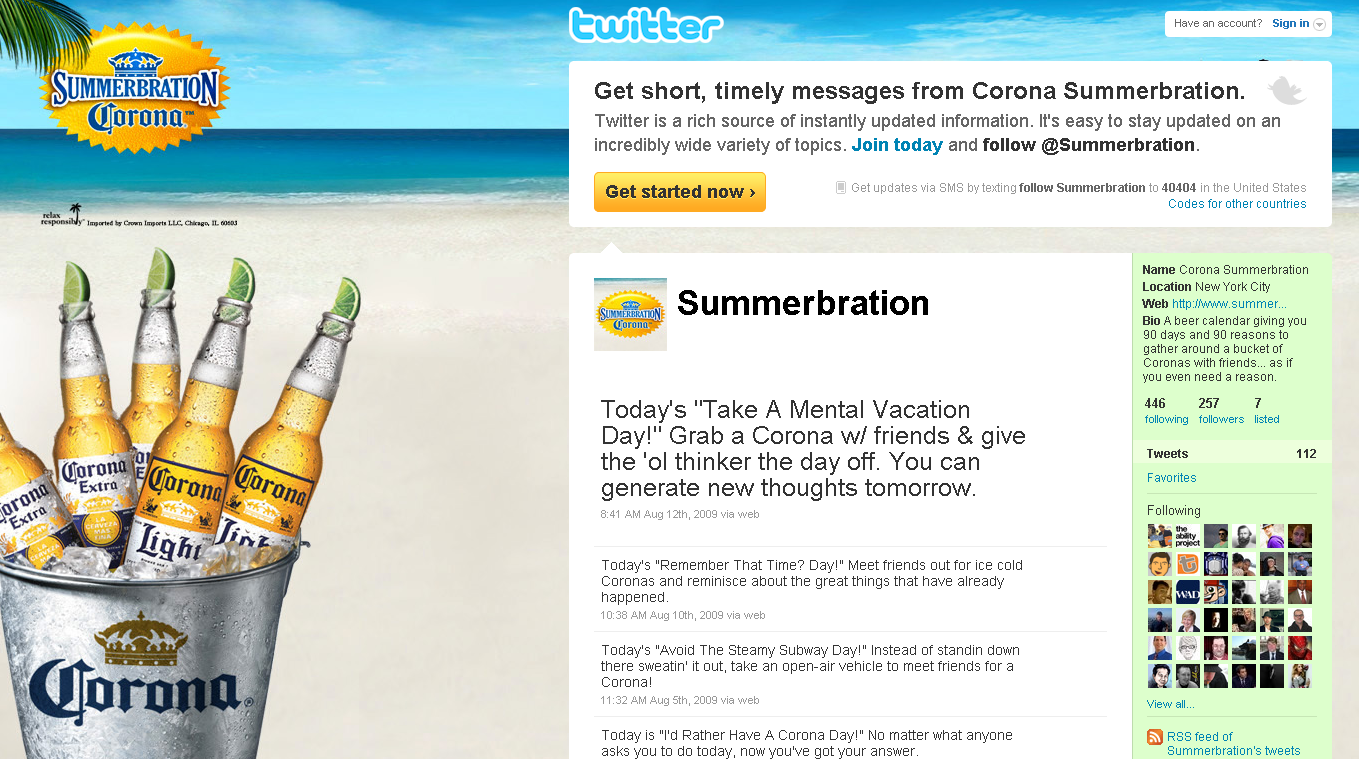 It seems that the old Summerbration campaign page is still up and live, which is wasteful for the client Corona who is paying the costs to host the site and should be redirected to the new Beach Getaway campaign site. The redirect will provide the new site with increased traffic, improved search results in search engines such as Google and allows the consumers to easily find this years promotion and not get confused with Summerbration 2009. 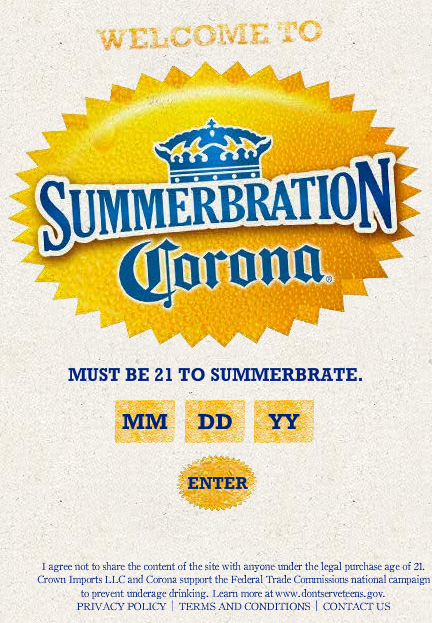 The Facebook pages also seem to be lacking for Corona as a brand but I did find an unofficial fanpage for Corona Extra. But the Corona Extra Facebook page has 22,292 fans who could have been engaged to drive some hype prior to the event, and even used to better distribute the summary videos shown above to friends on Facebook. The below images show that even though the Facebook page is not an official page it still has a reasonably high level of fan interaction for the wall posts which the Corona Beach Party @ Times Square could have benefited from. 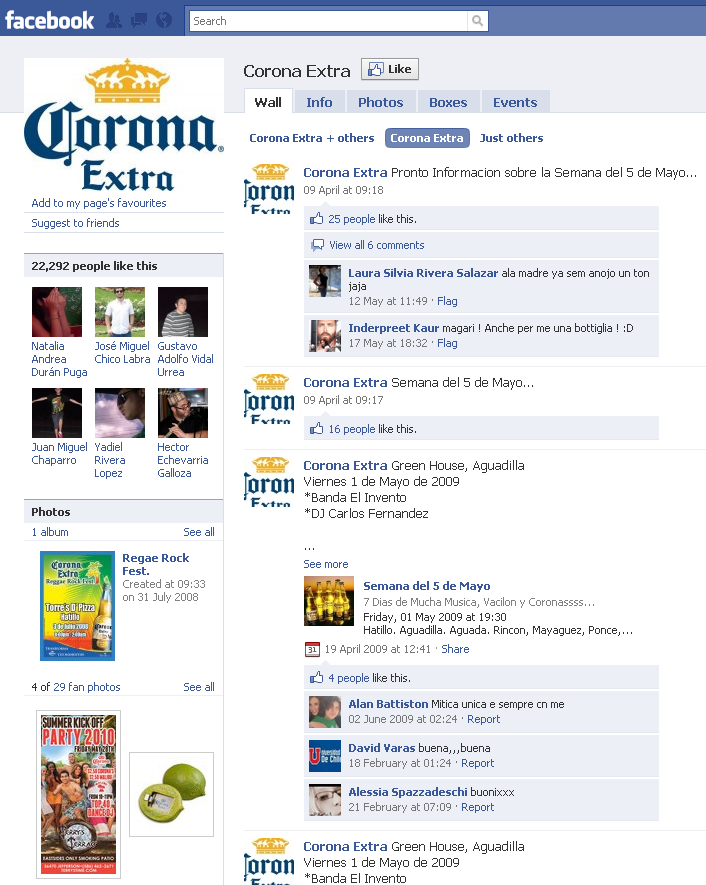 This shows the brands complete disconnect with online marketing and failure to understand the benefits of engaging social media which was a shame as I know many people in New York would have attended if they knew the event was on.  It wasn’t a secret show for a big act, it was a PR event for a new summer promotion that flopped in one of the biggest advertising market places in the world, maybe they should just stick to making beer?

Looking at Google Insights for Search screenshot below for a period of the last 30 days for US Google search traffic around the keyword “Corona” showed that even though the Beach Party event was held in New York City, it was only the 4th most interested metro location for search traffic around “Corona”.  The metro locations that showed more interest in Corona was: Los Angeles, Dallas-Fort Worth and Washington with San Francisco matching New York for web traffic.

Typically when a large event happens and is promoted effectively it influences consumer web search traffic as they are looking to find out more about the event, where it was held and what it was offering/promoting.  There was a very weak link between offline activities at Times Square, via PR channels and a complete miss on the online activities.

Looking at the website there is also a very large potential advertising space that Corona could have used to promote its Times Square Beach Party to its actual customers, there is a small link that enables you to visit their official Corona Facebook fanpage but I’m unable to access it, as it seems that page is no longer active and just redirects back to Facebook.com. This is a another failure to get social media right for this beach getaway campaign and it would have made more sense to have a campaign specific Corona Facebook page for all their summer events which can be re-used each year and would continue to grow members and audience they can market…

Corona’s marketing agency could have easily allocated a bigger budget around AdWords that would target at least New York residents, who heard about the event but missed it and wanted to find out more what it was about. There was some ads showing for Corona related search terms but they could have been tailored to NY with a messages such as hints about the Beach event they missed but it’s not too late to win…

Why not buy more AdWords traffic?
During the time leading up to the 24 hour event, it would have made sense to buy AdWords around Times Square related searches and depending on the budget it would have made sense to continue this until the campaign gathered some more momentum at least in the New York market as shown in the metro interests was quite low for New York. Since the event was focused around Times Square, it makes sense to run a geographic campaign that should capture some of that traffic. 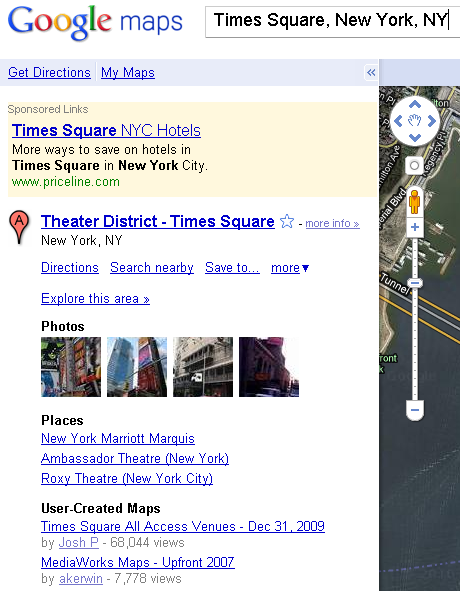 When I heard about the event, I Googled it to see what I could find out about the Corona Beach Party event, the screenshot below shows that besides the 2 video results posted 5 days ago, and a press release showing at #5 the results seemed to be more focusing around Corona’s dual signs that are showing on 1600 Broadway on 48th Street and not the event.  This shows both a lack of freshness in the Google results around Corona but also how it is likely that even if the PR releases had worked, there was no campaign site or official page detailing more about the event and advising its just a 24 hour one-off event. 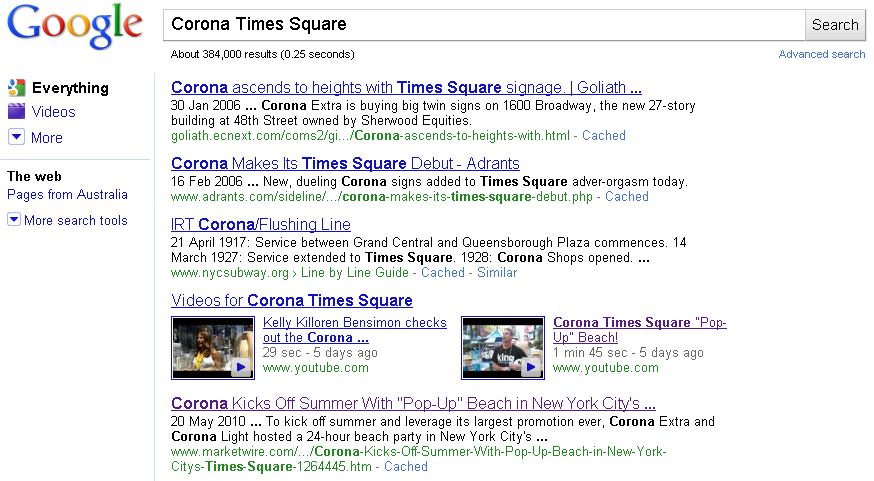 It seems that while some of the digital PR releases using keyword friendly links “win a beach getaway” worked for the exact phrase, the failure of the PR campaign to get picked up by multiple media publications meant that the site will likely struggle to the much higher traffic and suitable term “beach getaway” as shown below in the second screenshot. Again there is a missed market that could have been reached by expanding the campaign to use a larger AdWords budget.  It’s interesting to see that Coke did not want to miss the PR opportunity and was seen in several searches buying AdWords traffic around related search phrases, all promoting its own Summer rewards program. 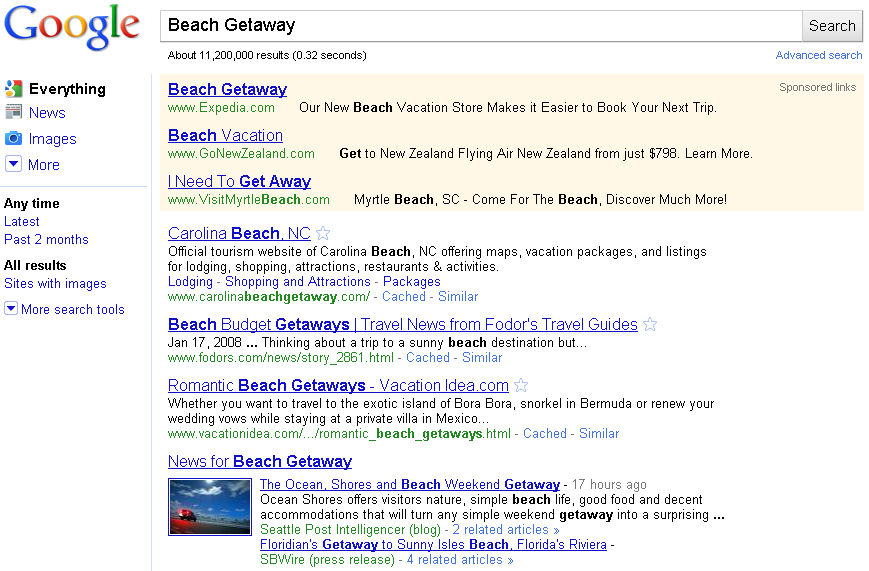 The welcome pages that require you to enter your state and verify your age is a large roadblock for any campaign, but business needs to obey local laws and campaigns such as the FTC’s national campaign to prevent underage drinking.