GM working to save a brand by running email marketing in a silo, without the support of a social media campaign, seems to be a campaign that is doomed to fail.

GM is looking for new ways to market online but are they still stuck in the past and ignoring growing areas such as social media? GM marketing chief Mark LaNeve recently outlined a plan to utilise sophisticated electronic marketing techniques to target Pontiac owners such as targeted email promotions.  These types of marketing campaigns were not utilised to retain Oldsmobile buyers after GM killed that brand in 2004, but is this the only solution, do they even have all the owners email contact details and have they examined the issue of if they actually have permission to market to them?

While email marketing is a great tool to for business it is not a silver bullet that will save a brand when used alone, so what other options could GM be utilising?  Mashable listed Ford utilising Social Media PR as one of the 10 smartest big brands in the social media space, but GM was not. While email marketing can be an important technique to target Pontiac owners, GM needs to understand that it is not a single solution to target Pontiac owners as a whole group.

It would be possible to split the demographics and target email marketing to part of this group, supported by direct mail, and telem 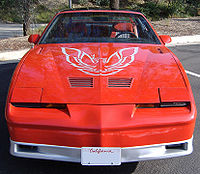 arketing campaigns.  Social media is perfect to compliment email marketing since Pontiac Firebird is a brand that has such heritage with strong fans suitable for Facebook, and thousands of images and videos suitable for YouTube/Flickr. Email marketing alone would miss this entire audience and GM would loose the potential to retain these customers to market their other brands.

Ford’s community manager Scott Monty is often quick to find out potential public relation disasters and respond. Ford understands that social media can be used to provide real-time feedback on how a company/corporation is reacting.   Email marketing is great for retaining customers and regular touch points, but doesn’t offer the engagement of social media. Social media is great for generating buzz about your product and engaging with your target audience.  A recent analysis posted on Mashable comparing Ford, GM & Chrysler shows that the Ford Fiesta campaign is winning in the online based on customer engagement and activity.

These figures show a significant lead by Ford in the social media field, so will a few emails sent by GM hope to capture this same buzz? In april

2009 Ford gave 100 web addicts a chance to test a Ford Fiesta for 6 months and post honest feedback using social media.  The platforms Ford has requested to be used for feedback are: Twitter, Facebook, Flickr & YouTube.  This campaign looks to be successful initially based on the activity analysis shown above.  Ford are also successful in social media as they don’t try and build a new platform they connect with existing platforms such as Twitter, YouTube, Facebook & Flickr.

The “Fiesta Movement” is working with social media to change the perception of Ford in the key 20-something demographic.  What makes this interesting is that these 100 were chosen from 4,000 applicants to do a 6 month auto beta test, this signup campaign alone generated millions in free press.

Dell has shown that they can make around $5617 revenue per tweet, so what is the potential value for Ford? The critics seem to agree that this can potentially sell cars as the 100 web addicts will become advocates or mavens for Ford. This 20-something audience typically has a high level of skepticism with large brands but this is a very public test of its products and will be interesting to see how it reflects in the content produced during the 6 months.

Ford understand their market better than most car companies and now more than 80% of Ford vehicles sold in North America are now fitted with SYNC, and typically sell twice as fast as those without.  Ford is using SYNC powered by Microsoft Auto Software to offer fully integrated, voice-activated, in-car communications and entertainment systems.  This is using technology to deliver better vehicles that people value and want to drive rather than purely competing on price/finance and Ford receive direct feedback from their social media channels they pass onto their engineers and design teams.

Fresh networks outlines the 4 core themes that the early pioneers in customer engagement Ford & Southwest  follow for social media.
1) Its about people not firms
2) Make things public
3) Connect with people where they are already
4) Provide a place for people to go

So GM working to save a brand by running email marketing in a silo, without the support of a social media campaign, seems to be a campaign that is doomed to fail….

*Update it seems that GM is now trying to kill Chevy as a brand.