So by running an ineffective email campaign they have turned a consumer evanglists into a toxic consumer and we all understand the power of word of mouth.... 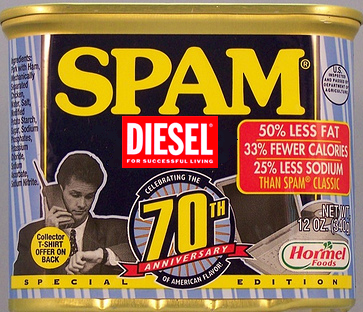 It is always a major annoyance when a large retailer or company cannot get the basics of online marketing right and turns a loyal customer into well an angry consumer! One of the retail brands that I used to admire and respect because it was smart edgy but recently I have been trying to cut down the number of newsletters and marketing collateral that fills my inbox each day.

I had subscribed from the Diesel store newsletter several months ago, but it’s recently that the email newsletters have started up again, almost on a weekly basis which is really quite annoying but I was to discover it is not always easy to escape from a list. 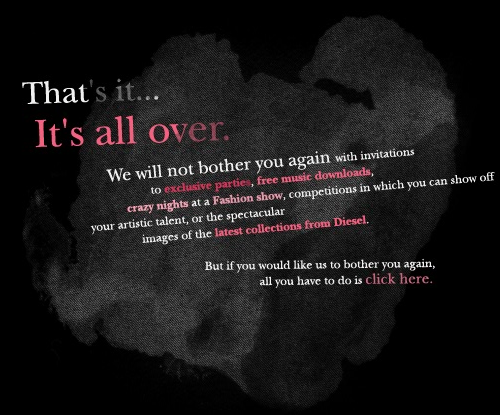 Step 1 take action unsubscribe from Diesel email list
Deciding to take action at the start of this process began on the 19th January 2010, when I received the diesel online store newsletter I clicked the unsubscribe link at the bottom of the email and was advised that I was successfully unsubscribed by website image shown to the right.  The reason that I have even got a screenshot because at the time I appreciate the cool factor and how they try once more to get you back onto the list with one last beg…”click here”
Step 2 freedom from Diesel email spam?
I had at that time thought that it was the end of it and I could go back on with my life with one less email newsletter clogging up my email account each week, it was sad because some of the invitations, offers and deals were still quite relevant. I had thought that in the future if I bought anything from their online stores or entered any competitions I would be automatically subscribed again, but it was too early to think they had let me free.
Diesel won’t let you unsubscribe from their lists!

But wait there is more emails…. on the 9th February 2010 I received yet another diesel store email newsletter, so I tried the unsubscribe feature again thinking maybe it didn’t process for some reason last time, and I also sent an email request to the sender to not receive any more email in the future. The email was sent to diesel_cult-reply@immiscible.diesel.com which is usually the best way to get quickly removed from any legitimate lists.  I was interested to find out what email marketing package they were using, so I decided to check the subdomain the emails were being sent from, I soon discovered that the sub domain was operated by eCircle’s. I now that eCircle is their provider of their email marketing solutions just by doing a simple reverse IP lookup on the subdomain with the detailed information shown below. 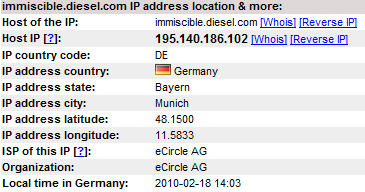 Diesel shows they don’t care about your privacy
I had hoped that my two unsubscribe requests and followup email had removed me from their email marketing list, but today I received a new email newsletter from Diesel.  It seem that it is more than just laziness this is a total disregard for their consumers and I have lost complete trust in the brand and all that I respected them for in the beginning. So by running an ineffective email campaign they have turned a consumer evangelists into a toxic consumer and we all understand the power of word of mouth, and I seem to be unable to leave their list….
What about EU Spam Laws?
It is likely that this continued campaign is violation of several EU spam laws but without the time and understanding of their judicial system it is hard to determine are they in violation of European laws and also state laws of Germany where Diesel’s email marketing provider eCircle is based and in Italy where Diesel is based.  Some of the many EU directives that relate to electronic privacy, contact and data protection that are likely in violation are listed below:

They are an EU based company and email marketing provider, and the email was originally subscribed to while I was a resident within the EU, so they should have to answer to EU privacy and data protection directives and let their subscribers leave their email lists.

Who is to blame for failure?

So the question is who is really responsible for the email failure is it Diesel for not picking an email solution that allows consumers to leave when they request to do so? Or was the Diesel email marketing failure dependent on eCircle’s email software solution for failing to accept and process several of my unsubscribe requests and ignore my personal email which many other solutions would have flagged.  So how can companies expect consumers to trust them with their details and address privacy concerns when they can’t even do the basics?

It is unreasonable that a consumer should have to goto such efforts to be removed from a marketing list that I originally opted into, I was a legitimate Diesel customer who really was interested in finding out more about their products. This process doesn’t look like it is over yet, so it is likely myself and Diesel won’t leave on amiable terms and may turn nasty in this breakup with a brand.

Google has once again updated it's interface but this time it's the compose/reply function.  The purpose is obviously designed to…

In a long-overdue move to catch up with Gmail, Microsoft has begun rolling out free POP3 support to Windows Live…